Netflix has just debuted the second season of 'Criminal: UK' and it's as excellent as ever...

One of last year’s most pleasant on-screen surprises was seeing the concept of the police procedural distilled down to its most effective elements as part of a multi-country experiment. The UK, France, Spain and Germany, each produced their own three-episode series under the same Criminal moniker and under the same self-contained sets – different stories, same format. (All the series were shot  on the same sound-stage at Netflix‘s production hub at Secuoya Studios, Madrid).

The idea was simple: each episode show a police team interviewing someone suspected of (or connected to) a separate serious crime at a turning point in an investigation. There were no car-chases, no exchange of gunfire nor courtroom scenes. It was  just an interrogation room, the recording booth, the corridor in between… and the people who occupied them. What resulted was a masterclass in script and acting, stories stripped to the most intense exchanges and performances that required the assembled actors to be at the top of their game – an enterprise more akin to an up-close-and-personal stage play.

It’s no wonder it attracted top-draw talent to the interrogation chair in its first run. In what could easily have been merely ‘stunt’ casting in less talented hands, David Tennant (perhaps in a trial run for Des), Hayley Atwell and Youssef Kerkour excelled in the opportunity to exercise those acting muscles and dazzle.  It’s great to report that the second season – the only strand returning from the experiment thus far, running to four separate episodes shot at Shepperton Studios, but essentially the same set-up – arrives on Netflix this week and is just as good.

All the four separate ‘stories’ here are compelling. Stage and screen star Sophie Okonedo is ‘Julia‘ brought in to provide some telling background against her philandering husband who has found he prefers young men to his more mature wife. Okonedo seems fragile and broken but as she talks about her ex-partner we see a different kind of strength and in doing so, she propels the investigating team into a moral minefield of how they proceed.  ‘Alex‘ brings in Game of Thrones legend Kit Harington as a forthright, defensive businessman accused by an employee of date-rape. Harington manages to give the audience a character they want to dislike, but as the team themselves note, a person can be objectionable and unpleasant without actually being guilty and their job is to find the truth. By the time the credits roll, the entry will likely have you talking about the methods and the outcome. The versatile Sharon Horgan is ‘Danielle‘ who runs a website that outs suspected paedophiles and she is unrepentant about her methods in sending such information out to wherever she thinks it will be most effective in its damage. However those methods have had wider repercussions and the episode peels back the intentions, the methods and the consequences slowly, once again asking the audience to shift back and forth in its sympathies.

The fourth episode ‘Sandeep‘ is perhaps the most interesting game of cat and mouse with the titular character already behind bars for another murder wanting to cut a deal that will reduce his sentence by promising to reveal information that could solve an infamous case involving a missing boy. Kunal Nayyar plays Sandeep and it will take you a good minute before your brain fully engages and screams “Wait, that can’t be the guy from The Big Bang Theory???‘ It can and it is. It’s easy to see why Nayyar – famous for his comic turn as the awkward Raj in the milestone comedy series – took the opportunity for a role that couldn’t be different. Sandeep is manipulative, arrogant and the very fact we know the face from something so utterly removed from this helps to sell our uncertainty about what we think and want to happen.

Many a traditional US cop show will give equal weight to almost soapy elements and style (however popular, look at Law and Order’s early years compared to now), but apart from the shiny floors and neon framing of the main room as decoration, the UK’s Criminal is a show that largely ignores such additions to its core remit. Yes, there’s banter between the team and a minor sub-plot carried over from the first run, but otherwise Yorkshire actress Katherine Hobbs, Lancastrian Lee Ingleby, Line of Duty‘s Rochenda Sandall and Bodyguard‘s Shubham Saraf are simply smart investigators, working as a team to spot cracks in their ‘guest’ and work together to find the right outcome. Along the way there’s disagreements and some moral choices, but these are all characters you’d want working the night shift for you.

Another absolute win for Netflix and perfectly manageable to binge-watch in almost one sitting, Criminal:UK shows what can be achieved when writers, directors and actors all bring their A-game. 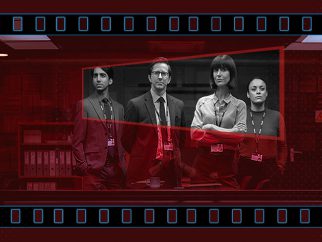