A procedural format is distilled down to its most compelling character moments in Netflix's 'Criminal'...

Criminal is actually a twelve-episode anthology split over four continents, three in each of the principalities: UK, France, Germany and Spain, with only the set remaining largely unchanged between them. (This review is solely for the UK section for the moment!). The casts are different, the crimes are varied, the tactics to find the truth are complex – but the urgency remains intact. One can argue that the working spaces – the interrogation room, the viewing room and the steely hallways are a fraction glossier than the grimier, basic variety of real life and that, occasionally the camera-work is stylistic but notable – but those are really the only compromises to ‘drama’.

Casting is important. David Tennant is one of the UK’s best actors. Even if you’re not a fan of his iconic run in Doctor Who, the sheer breadth of his other work shows his range. There’s Casanova, Broadchurch, Good Omens, Macbeth in which he slips convincingly into new skins as hero or villain. It’s that familiarity and dexterity which makes it impossible to be sure of his character’s innocence or guilt until close to the end of his episode. But while the first episode sees Tennant (as a doctor accused of killing his step-daughter) with a limited word-count through most of its running-time, the second, featuring Hayley Atwell (Agent Carter, Blinded by the Light, Mission Impossible 7) as a woman accused of killing her sister’s abusive boyfriend, has a suspect that won’t shut up – coming across like a punk-tinged  Catherine Tate with even more attitude. The third of the British run features the perhaps lesser known Youssef Kerkour (Strike Back, Jack Ryan) as a trucker who may hold the key to the location of people trafficked across Europe, but he’s an actor of no less calibre and whose character shows reluctance to help with a time-sensitive investigation with lives at stake. That allows him to be the pivot around which an ever-desperate interrogation moves – with consequences for the team itself.

Criminal‘s quality threshold could easily be limited to its hook of guest-suspect and while that might work well for a while, it would also feel like stunt-casting and nothing more. Fortunately, the series spotlights the team-work of the people doing the interviewing, putting as much emphasis on the ‘straight man’ as the ‘punchline’. Katherine Kelly, Lee Ingleby, Mark Stanley, Rochenda Sandall, Nicholas Pinnock and Shubham Saraf all prove their worth at key moments. Our knowledge of their backstories is limited, drip-fed little pointers which largely come from their movements as much as their words. Yes, there’s an element of tense, inter-personal relationships scattered amongst the small group on the more comfy side of the interrogation room window and some progress – albeit with subtlety and nuance – through the three stories. But the writing gives us just enough of an insight to prove and show they’re good at their job and also to potentially wrong-foot the audiences in their expectations of whom will prove the most important and effective.

In many ways, Criminal is what almost everyone involved in creating a tv drama dreams of: creatively it’s a small but hugely talented cast getting to flex their micro-expression muscles with a tight script stripped of its usual affectations and luxuries and with words, physical movements deftly executed to form a whole…  balanced with the practicality of a budget-friendly enterprise that largely consists of two rooms and a hallway. It’s the blend of pragmatism and luxury usually only found in the ‘bottle-episode’ of a larger, luxurious series It’s as if we’re watching a selection of key episodes from an otherwise larger run, distilled down to the best key, character moments submitted with a ‘For Your Consideration…‘ note and with all the usual filler removed or even a top quality stage-production with minimal accessorising transferred with aplomb before the camera and losing none of its impact.

Devoid of explosions, gunfire, chases, Criminal could have been a self-indulgent and boring mess. Instead it’s a reminder of just how good drama can be when it loses all its modern affectations.  Lean and clean this is another triumph for Netflix (in an already impressive year) and you leave the final UK episode wanting to know the future of the interrogation team (and likely ready to tackle the other international entries). It says something that it only takes three singular episodes to build up the kind of loyalty that some shows take a stretch of seasons to warrant. 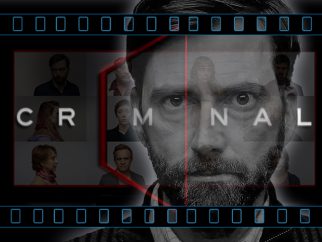