Netflix' continues a run of hits with a subversive dramedy about balancing school life and low-lifes...

Fraternal twins Sterling and Blair Wesley would seem to have an enviable life-style. They attend a top, privately-run religiously-funded school for the affluent kids of Georgia. But they’re love-lives with significant others are entering that delicate teenage phase, balancing what’s expected from them by their peers, families and each other. But when illicitly borrowing their father’s car, they are involved in a collision. It turns out that young though they may be, they can handle themselves when the other driver turns violent… which is why  ‘skip-tracer’ Bowser Jenkins mistakes them for fellow bounty hunters when he catches up with his quarry and subsequently offers to split the reward.

Sterling and Blair realise that they might just have a new steady form of income, or at least the chance to cover the costs of repairing their own vehicle. Even when Bowser finds out about their actual lack of experience, he realises they might be able to go places he can’t… he is after all, a middle-aged black man and this is Georgia.

But when some of the bail cases involve people in their own community, how will the twins be able to handle the divided loyalties and can they maintain their school cred with their street-cred?

As noted with several other recent 2020 entries, there’s thin line between producing something that feels designed and blueprinted to be a success on paper and a project that actually achieves it on screen. You can cast major stars, hire great writers and market the hell out of something and when it comes down to people actually liking it… it’s a still in the hands of the gods. Equally, a project can come from nowhere with no massive pre-established names attached and leave a broad smile on your face and achieve that elusive word of mouth.  It’s fair to say that Netflix’s Teenage Bounty Hunters, perhaps unexpectedly, fits into the latter category.

It’s essentially The Fall Guy meets Clueless. In the same way that 1995’s now classic  Clueless could easily have been perceived as silly and lightweight from a distance, but actually proved smarter, wittier and subversive when you watched it (director Amy Heckerling was inspired by Jane Austen’s Emma),  Teenage Bounty Hunters walks that very fine line between snark, farce and pathos. Yes, it’s two central characters are not the sharpest implements in the tool-shed, but it’s a mind-set based out of privilege and naivety not malice… their priorities shaped by lack of meaningful life-experience and they make up for that in heart and intuition. You wouldn’t want them handling combustible material but and you under-estimate them at your peril. The series has Jenji Kohan as an executive producer and her previous credits include creating break-out jail-based hit Orange is the New Black so this should act as a suitable, if slightly younger-skewed follow-up.

Originally announced as Slutty Teenage Bounty Hunters, the series dropped the first word of the title which is probably wise – the first episode may start with both the sisters (in separate cars) engaged in non-visually-explicit but fairly descriptive activities with their respective partners, but one needs to remember that the characters are supposed to be sixteen and there are still connotations to the word which simply don’t fit here (Both Sterling and Blair are active but not promiscuous). In fact, there’s a coy element to proceedings with a major aspect of the show being their highly religious school’s buttoned-down but fired up peer group proving holier-than-thou about chastity while turning a blind eye to students’ cliques and bullying.

Maddie Phillips and Anjelica Bette Fellini (as Sterling and Blair) hit all the right comedic beats and while they may not look like fraternal twins they have a sisterly chemistry that works particularly well in their dialogue. Phillips has been acting for seven years and has accumulated a vast amount of appearances in that time. Fellini has less credits to her name but proves just as reliable. Screen veteran Kadeem Hardison  provides able world-weary back-up as Bowser Jenkins, the legitimate ‘skip-tracer’ who reluctantly takes them under his wing when they crash his capture and he realises that there’s places that connected young white women can go that a black man still can’t, particularly in Georgia (where the show is set and filmed on location). The race aspect is consistent but not over-preachy and more than often presented subversively. In an early episode, the team are looking for a protestor who is decapitating confederate statues (filmed last year but now…timely, much?) and when gaining access to a private club lovingly festooned with confederate memorabilia and such, Sterling remarks “A jerk-off room for Dukes of Hazzard fans, much?”

Though clearly pitched at the empowered twenty-something market the show is strong and confident enough to appeal way beyond that… and as a much older guy, but still discerning in what I watch, I certainly found myself enjoying the series without ever feeling I was enjoying it too little  or too much. There’s swearing and violence that you wouldn’t find on a network show and much frank discussion, but like, say, In the Dark, it all feels in service to the finished episode and you’ll find yourself both entertained and invested as the series progresses.

One of those one sentence pitch that, like totally, turns out to be OMG, OTT awesome, Teenage Bounty Hunters is worth tracking down asap.

All ten episodes of Teenage Bounty Hunters are now on Netflix. 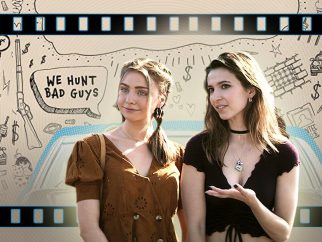 It Cuts Both Ways: First glimpse of FOUR-HOUR ‘Justice League’…