Dead before dawn? This Flemish flight of sf fancy takes off but doesn't quite soar...

After the death of her fiancé, Sylvie (Pauline Etienne) heads to the airport with his ashes and definite plans over what she will do next.  However things will not go as she intended. As the flight from Brussels to Moscow starts to board, a man called Terenzio (Stefano Cassetti ) dressed in a military uniform storms the plane and demands it take off immediately. Disbelieving of his ranting that if they don’t get off the ground, they will all die, pilot Mathieu (Laurent Celluto) still has no choice but to begin an unscheduled departure. But when all communication is lost with the ground it soon becomes clear that there’s some truth to the claims of their ‘hijacker’. Something is happening on the ground and it’s starting to cross the globe, in time with the sun’s rays and devastating to anyone in its path.

Now the surviving crew and the small number of people who were already onboard must decide what they do next. They come from different backgrounds, have different agendas and all of them have aspects of their lives they could be reluctant to share but now they’re involved in the same race against time as they turn west and away from the sunlight. But how long can they simply keep heading… into the night.

Critics will say Into the Night follows a well-trodden path (or, in this case, air-corridor) and that is derivative of several well known other airborne-with-a-twist outings… and they’d be right. Using a familiar template to tell its story-arc, there’s certainly elements we’ve seen in LOST, Manifest, The Last Train and a fair few disaster flicks along the way. Familiarity should breed contempt but this latest entry in the genre moves along at such a suitable pace – its six episodes feeling about right for binge-watching and with enough interesting characters to populate that period – that it essentially makes a fun and decent distraction if never proving too demanding.

Many of the best-constructed dramas thrive by putting a diverse, disparate bunch of people in an enclosed space and watching the inevitable friction. Like LOST, each episode tends to focus not just on the main story but on one of the passengers’ back-story, filling in their immediate history just prior to them boarding – and as you’d expect, there’s some questions raised along the way as to whether the image they project to the others is really at odds with the truth.

Taking part of its starting-point, if not much else of the story from the 2015 digital novel The Old Axoloti by Jacek Dukaj, Into the Night is presented primarily in dubbed form from the original Flemish-Dutch, with some subtitles as needed when different languages present narrative obstacles – neither proving a huge distraction and its cast do well in quickly delivering the beats needed along the way. Some work better than others. Pauline Etienne as Sylvie is the emotional centre of things with Etienne giving her character real heart, though the plot can’t quite decide if it wants her to be heart-broken suicidal loner or resilient leader and tends to vacillate between the two as needed. Laurent Celluto as Mathieu, the pilot seems to be the realist of the bunch, but again the plot tacks on a story of infidelity to make him more interesting. Mehmet Kurtulus as importer/exporter Ayaz is a shady character designed to keep us on our toes about his motivation and Stefano Cassetti (as Terenzio) always seems to be on the wrong side of deicsions made.

The show plays rather fast and loose with the pacing of its plot, sometimes too much so… anyone who has made a transatlantic journey will tell you how the minutes crawl by but here many of the plane’s full-circle journeys and fuel-ups happen conveniently fast when they need to. In one of the middle episodes, the survivors have to deal with an emergency surgery, a trip to NATO and a search for fuel – all in totally different locations-  with Sylvie instructing that everyone has to be back at the plane in a couple of hours max. Good luck with that! That’s a lot to pack into a 37 minute chapter and yet the show barrels along placing one obstacle after another in the rear-view mirror and creating deadlines that it then ignores. There were also a couple of cases where I had to check if the plane had already taken off again because, perhaps for VFX-purposes, they are kept to a minimum, often keeping inside the cabin and fuselage. (Though the few landings/take-offs that are shown work effectively)

While we won’t spoil the developments, some of the science is a little dodgy at best – some conclusions conveniently settled on with the flimsiest of evidence and seemingly there more to drive the episodic hurdles than make a lot of immediate sense. The claustrophobic paranoia may be the main staple, but that means there’s a few missed opportunities: while much is made of the danger of the dawn and the sun catching up with them, the threat consistently remains at a distance, whispered in dread terms but almost always just out of sight. There could have been scope to keep giving us literal glimpses of that light, framing it as a visual ‘enemy’, getting closer and breaching boundaries rather than just the invisible enemy over the inferred, artificial horizon.

While the opening salvos of LOST and Manifest were popular but struggled to reach past their original mysterious pitch and cast doubt on an original viable blueprint, Into the Night lays out and tentatively explains its core premise with the drama then coming from what needs to be done next. There’s no news of a second season as yet, but Netflix‘s other European premieres have done well (Spain has Club de Cuervos, Germany has Dark and Italy gave us Suburra: Blood on Rome  – all commissioned for further seasons after their debut).  There is scope for such if the premise is expanded beyond the plane and into broader plans hinted at in the closing minutes. 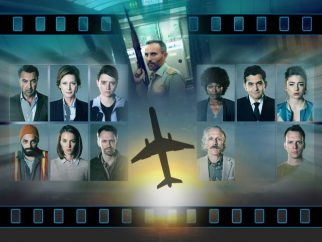