Hartley Sawyer, who played Frank Dibny on The CW show was fired over offensive tweets which included descriptions of harming women...

The CW has announced that they have fired Hartley Sawyer from The Flash series and he will not feature in the coming season.

The actor played Ralph Dibney (aka The Elongated Man’) in fifty episodes of the show, beginning in 2017, and was then updated to a regular the following year.  His firing follows the revelation of a series of  offensive tweets, some dating back to 2012. They included the likes of: “If I had a wife I would beat the hell out of her tonight lol,” , “The only thing stopping me from doing mildly racist tweets is the knowledge that Al Sharpton would never stop complaining about me.“,”Date rape myself so I don’t have to masturbate” and “as a lad, one of my favorite activities was kidnapping homeless women and cutting off their breasts”.  Hartley has deactivated his account but screen-shots were taken by some before he did so and Hartley ultimately confirmed them.

The joint statement from Warner Bros. TV, The CW, Berlanti Productions and executive producer Eric Wallace reads: “Hartley Sawyer will not be returning for Season 7 of The Flash…In regards to Mr. Sawyer’s posts on social media, we do not tolerate derogatory remarks that target any race, ethnicity, national origin, gender, or sexual orientation. Such remarks are antithetical to our values and policies, which strive and evolve to promote a safe, inclusive and productive environment for our workforce.”  Showrunner Eric Wallace posted his own statement – pictured here – expressing his concerns… 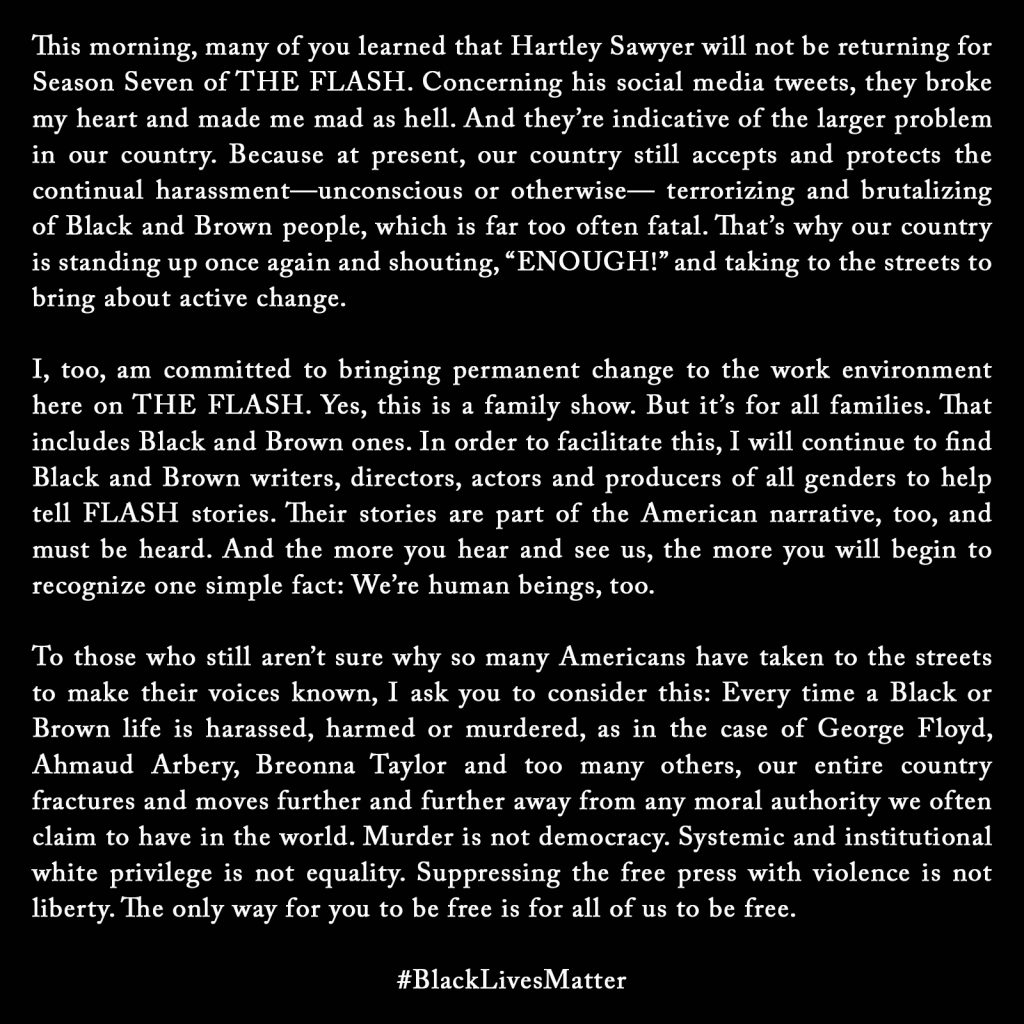 Series lead  Grant Gustin said: “I don’t have much to add because Eric’s thoughts are stated so eloquently and powerfully. I will say I was shocked, saddened and angry when I saw the tweets. Words matter”

Hartley is not the first celebrity to have past tweets and comments scrutinised. Roseanne Barr was booted from her own show after racist remarks in an interview and increasingly erratic behaviour. Kevin Hart lost his Oscars gig over previous tweets and Chris Gore, a writer on the anticipated Law and Order spin-off featuring Chris Meloni was fired after talking about how he would ‘light up’ any protestors who came on his property. While director James Gunn infamously posted offensive posts in the Noughties, he acknowledged those and apologised for them repeatedly over the years before being fired, further years afterward, from the Guardians of the Galaxy franchise. (He was later reinstated as the director of the forthcoming third movie). It appears Sawyer had not made any apologies until forced to do so this week with proof of the tweets and it’s unlikely he will get anywhere near the same support.

Hartley’s carefully-worded  Instagram-based apology on 30th May claimed all the tweets were ill-judged attempts at humour.

“My words, irrelevant of being meant with an intent of humor, were hurtful, and unacceptable. I am ashamed I was capable of these really horrible attempts to get attention at that time. I regret them deeply. This was not acceptable behavior. These were words I threw out at the time with no thought or recognition of the harm my words could do, and now have done today.“