A feast for the eyes, the ears and the brain... but what story is Westworld's third season actually trying to tell?

As Serac (Vincent Cassel) remembers the key moments that led to the creation of Rehoboam and the technology that would start to govern the entire world’s population and placements, Dolores and Caleb try to get into the system by making Liam Dempsey Jnr (John Gallagher Jnr.) provide them with the correct credentials. But Serac is closely on their trail and has no interest in sparing anyone who could threaten the status quo.  Caleb suffers the effects of an hallucinatory drug called ‘Genre’ that alters his perceptions, making their mission and their escape a more interesting and dangerous escapade than they could have imagined.

But if Dolores can release the classified data to the general populace, how will the everyday ‘reality’ of the real world change and will it be for the ‘better’?

For a show about fully-articulated, streamlined artificial beings with identity crises, Westworld sometimes seems to be having some issues of its own, not so much in its ever-impressive quality-threshold – there’s little doubt it’s the most daring, stylish and complex show currently on television – but simply in deciding exactly the story it’s wanting to tell on its ever-widening cyber-canvas. It continues to be consistently stylish, chic and dressed to kill (sometimes literally), but watching this week’s episode it was if we’d stepped out of the main narrative and onto the set of various big-screen productions created by Jonathan’s brother Chris.  With the exception of a few moments, the whole concept of the Hosts and their sentient predicaments were sidelined as we dealt with the even broader aspects of free will and combined it with gleaming skyscrapers and car-on-car caranage that seemed more appropriate to the Dark Knight trilogy.

The concept of Caleb being given a drug (the ‘Genre‘ of the episode’s title) that twists his perceptions to fit various move-themes is a simultaneously brilliant and contrived high-concept. It allows director Anna Foerster (Criminal Minds, Outlander, Jessica Jones, Carnival Row) to flex some surreal muscle and shoot scenes in different ways which certainly keep the attention.  Aaron Paul delivers the goods as he cycles through operatic carnage, a hint of romance, film noir intrigue and horror. Some of it looks more choreographed than organic, but the idea that we experience Caleb’s filter as well offers some wiggle-room. And once again, Westworld matches its visuals with an equal in-your-face soundtrack. From reworkings of both Wagner’s Ride of the Valkyries and the theme to Love Story to a near-perfect instrumental version of Bowie’s Space Oddity, it proves the powers-that-be continue to know how to play to all the senses simultaneously. (Jonathan Nolan had previously used Johnny Cash in the soundtrack to both this show and one of the most memorable episodes of Person of Interest). On that note, there’s also an intriguing glimpse of a man played by Enrico Colantoni  -perhaps best known for his role as Mars Snr. in Veronica Mars but also a total revelation in a far more sinister capacity  as underworld boss Elias in  Person of Interest  and who seems to fit into Caleb’s fractured visions of his past. Those glimpses of Caleb’s past grow increasingly suspect if you piece together what we’ve seen and what we know – and don’t – so far.  Is he who he thinks he is?

Genre  is yet another expertly-crafted episode in several technical departments, if a little indulgent in its stylistic flourishes… so it seems churlish to find too many faults – and yet…Westworld still continues to feel like the kind of show that will settle for being adored for its ambition rather than understood in its result…

The wider episode pivots around Serac, played by the cool, enigmatic Vincent Cassel, tracing his life  from  being a young boy after the destruction of Paris and how he and his brother sort to create an electronic ‘God’ that might save the human race from their own follies. There’s some broadstrokes on how they achieved that aim, but  as in many a sf tale it involves a massive, ominous sphere and lots of power. However the story is more concerned with how they and their financiers perceive such a creation – some seeing the way to predict and prophesise events merely for profit or, in Serac’s case a more profound ambition, if morally-dubious way to shape the world anew. Cassel gives the role just the kind of detached ambiguity it needs, playing another driven character who doesn’t see himself as a villain, despite knowing his own faults. In that way, he’s the perfect opposition to Dolores (Evan Rachel Wood)own by-any-means mission to give chaos back to the world.

By the end of the episode Dolores (with considerable help from Tommy Flanagan’s Connells and little hinderance from Jeffrey Wright’s Bernard) has, as threatened, released the information about individuals’ profiles to their smart devices across the world and people can see how they’ve been evaluated all their lives, restrained by computer-dictated expectations to thrive or wither on the vine. The result is instant chaos, perhaps too instant to be truly believable, but still a solid comment on how people react to being manipulated. It’s an important plot development to be sure, but the very fact it does feel like something that should have been the climax to the entire story – and yet is placed two thirds into the run – is another narrative factor that makes the viewer ask questions about the show’s pacing and over-all plans. (‘Only three episodes left to go!‘ claims the ending tease… so what next?)

Genre is yet another expertly-crafted episode in several technical departments, if a little indulgent in its stylistic flourishes… so it seems churlish to find too many faults – and yet… Westworld still continues to feel like the kind of show that will settle for being adored for its ambition rather than understood in its result… 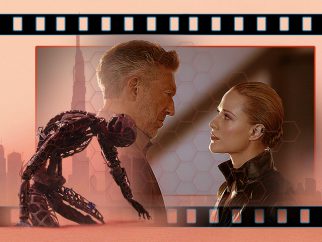