Over three million years ago Dave Lister (Craig Charles), a low-level worker on the space-faring Red Dwarf mining ship, wasn’t faring too well. he’d just been caught and sentenced for smuggling a pregnant cat onboard and was confined to stasis. It worked out better than he thought when he emrgaed to find out he had survived a radiation leak that killed everyone else on the ship.  Now his only company was Holly (Norman Lovett) the ship’s computer and a resurrected crewmate Arnold Rimmer (Chris Barrie) – though only in the form of a still-arrogant hologram. However he also discovered that there was an evolved super-cool ancestor of the ship’s Cat (Danny John-Jules) and, later, they were joined by Kryten (Robert Llewellyn) , a sanitation android with self-confidence issues. Together, they set off to explore the universe and all the absurd situations and challenges that coule ever involve…

However… whatever happened to the other cats who evolved over that time? And what will happen when a number of that long-lost faction choose to challenge their own leader and set off in pursuit of another ‘God’, one who they believe defied death, taught cats to speak and is now wandering the cosmos.

And what’s more, what will that do to Lister’s ego?

If we’re being honest, Red Dwarf was always the cheap-and-cheerful part of the sf world. Quintessentially British in a way that screams ‘If we can’t have big budgets, we’re still going to have fun!‘ it was bolstered by equal doses of snark and satire, able to boldly go (usually with a vindaloo and a botte of vino) where other shows avoided. In their own way original creators Rob Grant and Doug Naylor’s high-concept deep-space stories were as imaginative as Steven Moffat would later be on Doctor Who, if not quite as sophisticated as the Time Lord . The series was the kind of anarchic experience that made it equally popular to students and parents alike – cheeky, silly and weird, but never coldly cruel or too cynical. Even if the BBC couldn’t decide whether it was a mainstay or embarrassment, it was the show that was a cultural success though never guaranteed to be renewed… but even after periods of long absences, it returned as if recovering from a hangover and ready to buy another round.

Originally launched in 1988 – and running on the BBC until 1999 – the quality varied: sometimes its sheer lack of guile and self-awareness made it achieve great things despite its budget (the second-season episode ‘Queeg‘ is a great example of nice idea, clever banter and great pay-off) and in 1994 it won an International Emmy in the Popular Arts category and was also the Best BBC comedy in the Comedy Awards presented the same year. By 1999 it was achieving over 8 million viewers, an impressive feat for a BBC 2 show but its days on the channel were numbered and it disappeared, except for conventions and the occasional rerun, for over a decade. UK cable/satellite’s Dave channel picked it up in 2009 and was impressed enough by ratings for its initial three-part story to commission more series. Once again, reviews varied – some considered it a return to form, some less so. Certainly  there were moments when it showed signs of inspiration but also times when it was merely ‘Rentaghost‘ for an older audience and as the series continued, it was clear that its mixture of slapstick and punchline was in danger of becoming if not dated then over-familiar rather than daring and cutting-edge. It was, at best… reliable.

One of the strengths of the show was its camaraderie and a well-balanced team. Having been on set several times in the early days I can testify to the humour on show even when the cameras weren’t rolling.  But it’s been thirteen outings and over twenty years since the first episode (‘The End‘)  and it would be an untruth to say that despite the wash and brush up for its latest outing, entitled The Promised Land, the seams are showing and stretched – and not just on the costumes.  What worked as dysfunctional people in their 20s/30s is less organic when said crew-mates are three decades older but none the wiser. The problem with Red Dwarf  has often been that it delivers its fair share of really good jokes but then, noting the response, repeats them several times over and rather than multiplying the laughter it becomes a law of diminishing returns. Take for example the doors on the rogue cats’ spaceship. Instead of working horizontally, they’re vertical, like cat-flaps. It’s a funny visual, but once you’ve seen it three or four times, the imposed laughter-track doesn’t quit convince you it’s still quite as hilarious as it was. Equally some of the snark delivered by our heroes varies between genuinely funny and just flat, but that laughter track still insists you should be splitting your sides over sometimes what often amounts to a vague smirk.  Like a veteran stand-up comedian under the spotlight, it’s caught somewhere between trying too hard to honour the ‘classics’ and not trying hard enough to keep fresh, relying on known punchlines rather than sheer prestige.

But before complaining too hard that there’s nothing new here , The Promised Land special is at least a decent regular episode (albeit squeezed into three times its normal length), perhaps a nice idea for a slightly extended standalone story expanded out with the aid of some decent, if not always consistent special-effects. There’s nice touches: the Starbug exterior shots on the sand moon are lovingly rendered, the low-power-mode Rimmer is shown in black and white (once considered for the main show but too expensive to continuously do on a weekly basis at the time) and there are moments of short, but well-written pathos (Lister explaining the idea of reflected light as friendship works better than you’d think).

For die-hard fans, the return of the ‘Boys from the Dwarf’ will be a welcome diversion, a guilty nostalgic distraction that will warrant a smile and reaching for the DVD box-sets (or possibly VHS)… but one does wonder how long the familiar banter and same punchlines can continue to endure… still, for the moment, this cosmic feline variation is still more grounded than the movie Cats. 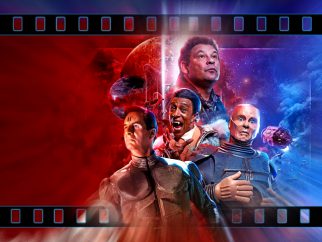