'The Tower' was meant to be the penultimate episode, but instead it rounds off the season... for now.

With the loss of Alpha,  the scarred and haunted Beta may be emotionally unstable but he’s still determined to bring death and destruction to those who escaped the Hilltop Massacre and slowly but surely he leads the huge horde of the undead towards the survivors. Most of them are holding up in a tower of an old hospital, licking their wounds and trying to plan what to do next. But Negan and Lydia, Carol and Kelly and Daryl and Judith all need to have their respective conversations about recent events and their regrets before they can decide what roads to take.

Meanwhile in an urban city sprawl, Eugene, Ezekiel and Yumiko meet a young woman who has been alone in the city for years. But is ‘Princess’ (as she calls herself) an ally or a liability?

With its current run curtailed for obvious reasons, Sunday’s episode of The Walking Dead, entitled The Tower (and due to be the penultimate of the season) now stands as the end… for now (the original finale will be broadcast later in the year, ahead of the new run which may or may not debut in November). Therefore it’s somewhat hard to judge fairly. It’s not the tension-filled seasonal send-off that we’d often associate with the series, but it was never created to be that… so as a set-up and placeholder, gently nudging some of the cast into position for what’s to come, it does a decent job.

The scenes including new-arrival Juanita Sanchez aka’Princess’  (a popular character from the comics’ version), essayed here by the delightful Paola Lázaro, won’t be to everyone’s tastes – the character, after years of isolation in the city, is absolutely bat-shit crazy, though thankfully, that  manifests as over-the-top manic enthusiasm and an escaped inner monologue rather than a homicidal inclination to be any kind of big boss.  In fact, the line about her deciding to call herself ‘Princess’ rather than ‘Queen’ because that would make her sound too old and pretentious gets a classic moment of acknowledgement from ex-‘King’ Ezekiel (Khary Payton). You’ll end up laughing with and at her, though in truth she’s the kind of person you’d probably want to run screaming from after minutes of conversation in real life. But Eugene (Josh McDermitt), Ezekiel and Yumiko (Eleanor Matsuura) find they have to trust her navigation skills when their  horses bolt and endanger the already tight timetable to meet Stephanie (the voice from the radio). Though they come to regret it, in part, it’s the kind of memorable introduction that fans will love – think of her as a gay-prided Michonne on speed. (That being said, there’s a moment when it looks as if the production is genuinely going to pull a fast one and immediately kill Princess off in a minefield for the sake of a ‘didn’t see that comin’?’punchline – which, thankfully, they decided against).

Elsewhere, the tower of the title is a desolate building where many of the survivors of the hilltop massacre are camped out, assessing what they do next. For Negan (Jeffrey Dean Morgan) and Lydia (Cassaday McClincy) that’s a reluctant heart-to-heart about the death of Alpha where both sides get to say their piece, if not make it. It’s interesting that after so long as the face of flippancy, Morgan’s Negan actually gets some nuanced delivery, fully understanding the pain he’s caused even if he couldn’t have done things differently. There’s a similar situation, though ultimately with a more forgiving conclusion, between Carol (Melissa McBride) and Kelly (Angel Theory) as Carol looks for some redemption from her recent actions that caused so much loss, even if not intended.  Daryl (Norman Reedus)and Judith (Cailey Fleming) also exchange some home truths while out on guard-duty and the fact Michonne isn’t coming back any time soon is referenced, though it still seems like it’s artificial to the bigger narrative.

The ending is inevitably a little anti-climactic, merely hinting at the chaos to come, a pause for breath rather than a sharp intake. Beta (Ryan Hurst) – now with half of Alpha’s face sewn onto his own torn mask – yuck! – is busy gathering the horde, having being led it through Hilltop, Alexandria and heading to Oceanside… and now nearing the titular Tower ready for a major battle.

What will the actual finale – A Certain Doom – bring when it finally gets to screens? Likely the end of the Whisperers arc, some potential deaths among our heroes, the introduction of another community (from which Stephanie comes) and we get an informal glimpse of Maggie (Laurie Cohan) ahead of next season’s formal full-time return to the cast… (as shown below) 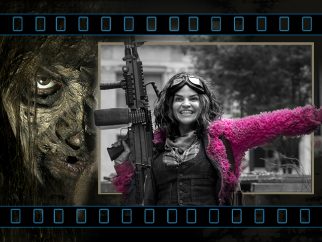