Ray Garrison (Vin Diesel)  is part of an elite special-forces team that specialises in getting in and out of the trickiest situations. During his latest mission, he manages to save a hostage from terrorists but on some well-earned r&r with his wife Gina (Talulah Riley) their Italian getaway is gate-crashed by a man called Martin Axe (Toby Kebbell), the flamboyant leader of the terrorists who demands to know where the leak about his activities came from. Garrison legitimately doesn’t know the intel, but whether Axe believes him or not is irrelevant. He kills Gina in front of him and has Garrison swears unholy vengeance, he kills him as well.

But Ray is as surprised as anyone when he wakes up in a hi-tech facility, unable to fully remember his past life but now finding himself the recipient of ground-breaking technology that increases his strength and mental processing-power. The chief scientist at the facility, Dr. Emil Harting (Guy Pearce) informs him that his old life isn’t important and he’s now going to be a member of an enhanced team of operatives on the front line of America’s defense program.

But Ray starts to remember his past and, defying orders, decides to go after Axe. However when he finds him, it appears Ray’s problems are just beginning… This isn’t his first ‘revenge’ mission and it won’t be his last…

There’s no denying that Bloodshot is derivative of every action genre movie cliché you’d care to expect – think Universal Soldier, Robocop, The Matrix, Mission Impossible if we’re being charitable. For better or worse, it’s a comic-book adaptation that’s been watching the genre-efforts closely and cherry-picks some reliable elements. The result is a film that it feels, tonally, like an early Marvel Cinematic Universe film – perhaps around the Iron Man 2 mark (and from which it boasts another Guy Pearce turn) –  the kind of movie relishing a decent (if not groundbreaking) budget for its special-effects but without the expectation to do anything but deliver some fun. In that sense it largely succeeds. Car-chases and fisticuffs abound as do similar challenges to the law of physics (which should satiate those annoyed at the year-long F9 delay). A battle scene between super-soldiers in an exterior elevator is well rendered and kinetic enough to please, though, as with much of the film, it loves its slo-mo just a bit too much to be entirely forgiven. Another scene, set in a dimly-lit freeway tunnel surrounded by crashed cars and a wrecked flour truck is far less satisfying. But it’s also true that it’s all self-aware enough to know it’s embracing movie tropes and then seeks to subvert a few, to differing results. Soon after we find out the truth about Ray’s real history, the programmer responsible for much of the origin-story/virtual-narrative we’ve seen so far (Siddarth Dhananjay) is scolded for his use of such template OTT material. It’s the moment where you start to pay a little more attention and realise better material may be coming, though in reality it doesn’t mean the movie entirely pivots away from such.

Diesel himself does as you’d expect, able to growl his dialogue and punch with conviction and if the script doesn’t quite rise to the potential of the idea, the actor himself knows his audience’s expectations and delivers them without irony…

Director Dave Wilson (in his first directorial feature after a career in CGI supervision – and boy, does it show)  knows the set of required tricks and tries to emulate the works of Ridley Scott, Tony Scott and Michael Bay. In the end he comes up with a working, if not inspired facsimile, an ode to excess that’s far better than it could have been because of its visuals and sense of scale.  But those visuals dominate at the expense of everything else, and any slightest sense of real logic, depth or intended universe-building crumbles under the lack of efforts elsewhere. For instance, there’s some bizarre country-hopping and around the end of the second act… a truly gobsmacking shift that is either evidence of atrocious editing or budgetary trims as Diesel leaves ‘Soho, London’ and remembers his time in Italy with his ‘late’ wife… and is suddenly in a road-chase with the contemporary villains that quite obviously, mid-scene, becomes another country entirely, only to end up back at bad-guy HQ a few minutes later for the climax. It’s possible it was all shot in the same place, mainly South Africa with London window-dressing (because…oh look, an inevitable black cab and a now decades-out-of-date red telephone box), but the change of locale makes no sense narratively – he’s in the same car, same clothes with no indication of any time passed – so one can only presume the film-makers, momentarily dazzled by their SFX action sequences, hoped you wouldn’t notice. Frankly, it’s hard not to.

(There is something ‘meta’ about the ‘pull-back-the-curtain’ aspect of some of the SFX… an early scene that feels like it has a computer-generated backdrop turns out to be, well, just that and we get to see it be de/re/constructed like the computer-game /VR platform it wants to be and a later scene shows an entire coastal town being constructed from pixels like an effects-house showreel).

Diesel himself does as you’d expect, able to growl his dialogue and punch with conviction and if the script doesn’t quite rise to the potential of the idea, the actor himself knows his audience’s expectations and delivers them without irony. But ‘Bloodshot’ – though that’s the name of the process that developed him, Ray’s never referred to by that name – is a vague construct. We know he’s stronger, faster than ever before thanks to the nanites in his bloodstream, but the ability to remotely access computers is there only when useful – there’s no exact skill-set.  In the supporting cast, Eiza González is put to better use than you might expect as KT, another operative – an injured Navy Seal diver now given the capability/handicap of being able to breathe anything through a filter (and to synchronise-swim without smudging lipstick or eye-liner). Lamorne Morris (New Girl) essays a familiar but fun motormouthed hacker and techie named Willfred Wigans who steers more towards funny than annoying and saves some of the scenes he’s in. However the likes of Outlander‘s Sam Heughan, The Resident‘s Alex Hernandez as other ‘enhanced’ operatives are mostly wasted – getting little more to do than be sneering punch-bag and repeated collateral damage respectively. Guy Pearce, who bounces between interesting indy movies and studio tentpoles can now perform disaffected, duplicitous bad guy in his sleep and here he ends up in capable form but not offering any real surprises. Toby Kebbell, set up to be the flamboyant big bad at the start, makes the most of his few scenes, clearly enjoying the excess.

Initially envisioned as starting not just a franchise but a whole cinematic universe of Valiant‘s comicbook characters, that now seems entirely unlikely. However, robbed of any significant box-office clout or profit by the coronavirus’d multiplex closings within a week of its release, it could actually find a far more appreciative audience on the sped-to VOD (o-on-demand) format, with viewers looking for a simplistic, silly, fun distraction – which it manages in spades …

Bloodshot is released to VOD by Sony Pictures and is available now. 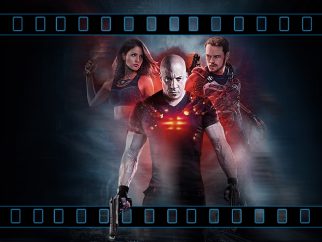