'Blue Skies' thinking: A frustrating finale is saved by a nostalgic postmortem...

With Picard imprisoned and in failing health, Romulan forces speeding to annihilate the planet and the Synths preparing to light a beacon that could destroy all organic life, it appears that it could be the worst of all worlds. Narek and the crew of the La Sirena reluctantly find common-ground in a last-ditch mission to destroy the beacon and Agnes attempts to redeem herself, but each face huge challenges.

As time runs out and Soji’s hand hovers ready to bring unseen forces to her aid and destroy humanity, there may be little time for anything other than essential maneuvers.

Picard realises that he is unlikely to survive. Desperate times call for desperate measures and sacrifices…. but is it already too late?

The finale for Picard boasted and suffered the same aspects as much of its run. Nice to look at, good intentions, some well-scripted introspection, bucket-loads of nostalgia and easter-eggs for the faithful and meaningful looks from talented actors… but questionable pacing, too many characters with not enough to do and over-monologued climaxes taking precedence over larger story resolution.  A series of self-contained great narrative moments rather than closely-woven boldly-going story-arc satisfaction…

The super-sized climactic battle was big on special-effects and there was genuine tension as forces gathered… but in the end they were painted in such broad strokes that it felt more like a pixel-party for the SFX department than a triumph for its script counterpart… with far too many plot-holes or contrived moments building that were ultimately resolved with lines rather than moments. There were more starships than you could shake a phaser at, but on closer inspection most of them were sleights of hand or decoration sitting around for attack orders that failed to come… and countdowns that never reached ‘0’ to due long, drawn out pauses. HUGE seasonal elements such as Romulan aggression, synthetic zealots, the apathetic and potty-mouthed Star Fleet command all essentially girded their collective virtual loins ready for action and then…were talked down by a pep talk from a dying Picard who told them they were all wrong and should simply go home… They all glanced menacingly at each other for a moment and then wandered off. It felt like Moses getting ready to part the Red Sea but then the tide simply going out.

Though lovingly rendered, many of the main parts of the story simply feel rushed and awkward. A literal one-size-fixes-all maguffin device solves all the technical obstacles with a ‘and with a leap he was free‘ disregard for tension. Picard’s failing health has got referenced at a few points this season, but he suffers sudden in/convenient deterioration in a matter of minutes simply to crank up the tension.  The Synthetic overlords, built-up as the oncoming storm, are glimpsed through a wormhole and then simply skulk back into whatever cyber-Lovecraftian dimension they existed in (ignoring the possibility of linking to Discovery‘s second season AI enemy); Isa Briones’ bad duplicate Sutra gets ready to unleash  wholesale non-organic Armageddon and then…. simply gets turned off by Soong and the retired Will Riker apparently has more sway than Picard by convincing Star Fleet to do what they wouldn’t do for Jean-Luc: suddenly give him command of the biggest fleet since Wolf 359 and risk starting a new war. Perhaps he bribed them with pizza.

The Romulan part of the story-arc – so evil they have at least five planetary-wide sterilisation procedures to choose from – also falters. Peyton List’s Narissa Rizzo remained a bland, cookie-cutter comic-book villain to the end, with no real depth or character beyond scripts dripping in sarcasm and sneer (when she meets up with Narek and he explains he’s found the Synth enclave she asks whether he’s fucked or shot any of them yet – which would be a great line in Game of Thrones but achingly out of place here)… and surviving just long enough to skulk around the Borg cube, make a few snarky comments to Seven of Nine as they dance around and then get drop-kicked to her death from a gantry, chewing the scenery as she plummets. Treadaway’s Narek, at one point being built-up as an interesting, conflicted bad guy is  even more surplus to requirements here. He gets to sit around a campfire telling time-killing stories of yet more comma’d Romulan-mythical beasties to a group of people who should have legitimately killed him on sight and then… utterly disappears from the third act. His brief presence begins to feels more like a contractual obligation than of critical import. Picard and Agnes seem to easily traverse the planet despite the flower-power kids surveillance, sneaking back to the La Sirena like it was a day-trip and Rios subverts a crucial security search by blatantly smuggling in what amounts to a literal ‘nuclear football’.

But… without sounding too grouchy, even amidst some disappointing resolution and contrivances, there’s stuff to like.

If the ‘big’ picture is blurred, redemption comes with the strongest moments of the episode  – all of which are, ironically, after the ‘climax’ and Picard’s death (which at 15 minutes before the end-credits you know isn’t going to stick).

The under-used Elnor (Evan Evagora) and the enigmatic Raffi (Michelle Hurd) share a howling moment of grief that will be recognised and felt by anyone who has ever suddenly lost people they cared about and the vino-bonding between Seven (Jeri Ryan) and Rios (Santiago Cabrera) over their bad-decisions also rings a true, if quieter bell. The postmortem Picard and Data (Brent Spiner), talking in a final goodbye is heartfelt, the former being relieved of his guilt by the latter who wants his own virtual consciousness to dissipate and ‘die’ to complete the human experience. Both actors deliver in spades, knowing that this is the scene for which existing fans originally paid the price of admission / subscription. It’s good that the show didn’t seek to revive the beloved android for real as a ‘happier’ ending, though ultimately putting Picard in a new body (echoes of X-Men‘s Charles Xavier?) feels like a maguffingly-convenient get-out of jail free card, albeit with all its carefully-listed caveats (yet hardly iron-clad rules) against the ability to now make people immortal.

We leave proceedings with Stewart quoting Shakespeare (because that’s always a good thing),a reprise of ‘Blue Skies’ (here sung by Isa Briones, adding to her already exhausting contributions to the season) and with Nu-Picard setting ‘sail’ with the La Sirena crew, with everyone apparently forgiving and forgetting past grievances (and Raffi and Seven apparently connecting in a glimpsed wait-whattheheck-where-did-that-come-from?-way) and with an off-camera Star Fleet suddenly reversing its VERY BIG DEAL decade-long policy on its Synth ban as if it was simply changing its lunch-order… or like an after thought quickly cured in ADR.

Despite a laundry-list of frustrations and its far-too-many characters ensemble, there’s much to like and applaud in this first season of Picard,  ending as it began with a wave of non-apologetic nostalgia. It’s full of emotional intent and lots of people saying they love each other (sometimes awkwardly, sometimes casually, sometimes because the script says so)  but the production obviously not quite sure which windmill to tilt at and so trying a little bit of everything –  hoping the cast’s collective talents and the effects will compensate… and it’s almost enough. Ultimately, this feels like an expensive scattershot trial run, one that would have truly benefited from a season of half the length or being experienced in novel form.

It’s been good, sometimes very good but not as innately great as it could have been. Only ‘Nepenthe‘ – directed by Doug Aarniokoski – stands out as perfectly-balanced.

A second season is already confirmed. If it can build on the potential of the first, knowing the story it wants to tell before a scene is shot, rather than making things up as it goes, it should live long and, yes, prosper… 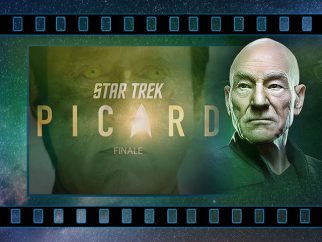