The new Bond film may be delayed, but an updated Bond tome should keep fans busy...

Over the years, Paul Simpson has written and performed editing duties on a vast number of books and magazines, demonstrating a depth of knowledge across an equally impressive range of pop-culture essentials. So it shouldn’t be any surprise that his latest tome – actually an updated edition of 2015’s  Bond Vs Bond – is just as impressive as all his previous efforts. But what’s quite obvious is that there’s a special appreciation at work here for the subject… while there have been plenty of printed Bondian outings over the years – ranging from the dry and thesis-like through to lightweight, fluffy and quite generic efforts – Simpson’s work again deftly walks the tightrope, combining accessible, fun information with a love for the source material and a result that should please long-term fans and more casual cinema-goers alike.

A rather mundane cover hides a comprehensive examination of one of the industry’s most famous franchises. After giving the reader a history lesson on how Ian Fleming’s famous secret agent came into being on the printed page, it subsequently takes the idea of those partisan internet polls you often see (ones that ‘rank the best of…‘  in a purely subjective manner) and instead of the author deciding for you, looks to the factors in each era of the franchise and what may be considered their particular strengths.  Anyone looking for new, shocking revelations won’t find any deep, dark secrets, but neither does this celebration of all things 007 shirk away from the more controversial moments: Connery’s ‘fractious’ relationship with the producers and his subsequent departure (and return and competing projects), George Lazenby’s brief and ‘uncomfortable’ tenure in the role, Timothy Dalton’s more ‘realistic’ take and the widening gap between more mature Bonds and their stunt-doubles are all acknowledged…. as are some of the narrative inconsistencies that inevitably appeared over the decades as the cast and writing teams changed. The big changes in the Bond myth, not pretending that Daniel Craig’s tenure was part of the ‘regenerating’ aspect of the same man but the total retelling/reboot of the character, are also examined as are the unused, previous considerations to using that idea for Dalton’s era.

There are the inevitable sections on the Femmes Fatales and the musical considerations, both of which remain essential marketing factors through the years. This revised work’s re-issuing and updating was originally set to debut just ahead of the latest Bond film, No Time to Die with a chapter of known information on the twenty-fifth movie  But the film’s delay – one of many films that have shifted their release date in the wake of current global health conditions – doesn’t actually harm the book in any real way and, indeed, it should be a nice taster as fans hold out for the November release in multiplexes. The fact that the film will be Daniel Craig’s final outing in the role (no, honestly, we mean it this time), means that the book feels like a legitimate, more complete work rather than something that will become out-dated in a short-time like a vast majority of franchise handbooks.

What the future holds for James Bond may be open to question, but this 208 page edition answers a lot of things about his past and is well worth the 14.99 (UK) and $21.99 (US) cover price.

Bond Vs Bond: The Many Faces of 007 is available from Race Point Publishing now. 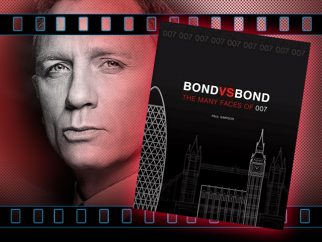