New Year’s Days and Transfused on the BBC…

Ghosts,vampires and Gallifreyans, on my! Several tv shows will be making their 'presents' known this season...

Following through on its promise to return ‘early in 2020’, we now know definitively that Doctor Who will be back on tv screens on New Year’s Day – kicking off with a slightly longer episode (entitled Spyfall) before settling back in for the rest of its run on consecutive Sundays.  Doctor Who had a modern tradition of a Christmas Day slot, but that appears to have moved a week onwards by a week. In the UK the episode will be shown on BBC1 in the early evening and in the US it can be seen at 8pm EST on BBC America. There are also various cinemas in the US showing the episode ‘live’. The latest trailer can be seen below or here…

But there are several other projects that are hooked on classics and have potential ‘must-see’ considerations.

Ex-Who showrunner Steve Moffatt and fellow Sherlock writing partner Mark Gatiss have penned their version of Dracula which has now been confirmed for a three-consecutive-night run, starting on New Year’s Day on BBC1. Unlike Sherlock which saw the titular detective transposed to modern times, this version of Bram Stoker’s vampire (a co-production with Netflix, who will debut the project shortly afterwards) is a traditional period piece with Claes Bang as the blood-sucking count who arrives in the UK with a very personal mission. The cast includes John Heffernan, Jonathan Arris and Catherine Schell and Gatiss will also appear in front of the camera. 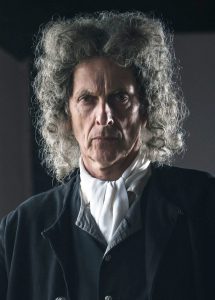 Gatiss is also the man behind another adaptation of an MR James ghost story, another growing tradition at yuletide.   There have previously been the likes of Crooked House (2008), The Tractate Middoth (2013) and last year’s The Dead Room, starring Simon Callow.  Peter Capaldi (Doctor Who, The Thick Of It) will star in Martin’s Close, airing on BBC Four. The 30-minute drama is based on the story of the same name with Gatiss on writing and directing duties. For those who don’t know the story:  It’s 1684 and John Martin is on trial for his life. Facing him, the infamous ‘hanging judge’, George Jeffreys. But this is not a cut and dried murder case. Because the innocent young girl Martin is accused of killing has been seen after her death…  Wilf Scolding (Game Of Thrones) plays John Martin, Simon Williams (The Archers) is Stanton, Sara Crowe (Four Weddings and a Funeral) is Sarah, James Holmes (Miranda) is Snell, Fisayo Akinade (A Very English Scandal) is William and Elliot Levey (Murder On The Orient Express) as Judge George Jeffreys.  Ex-Doctor Who Peter Capaldi plays the part of Dolben.  You can glimpse some scenes here…

There’s also a retelling of another classic: Charles Dickens‘  A Christmas Carol. It stars Guy Pearce (The Count of Monte Cristo, Memento, Iron Man 3) as Ebenezer Scrooge, Joe Alwyn as Bob Crachitt, Stephen Graham as Jacob Marley, Andy Serkis is the Ghost of Christmas Past and Jason Flemyng is the Ghost of Christmas Future. Taboo/Venom‘s Tom Hardy, is also executive producing. The US’s FX will debut the film on 19th December with the BBC and British broadcast taking place three days later.

Sequel/Prequel: Will ‘WW-1984’ be more equal than others?