The latest tv superhero is a stylish entry in the Bat franchise, with a woman in the armour and a LGBTQ twist...

Three years ago Batman disappeared and though the citizens of Gotham have looked to the skyscrapers and spires, there’s been no sign of their Dark Knight in all that time. Some think he’s dead, others that he simply deserted them. In the meantime, Crow Security has stepped into the breach, headed by Jacob Kane (Dougray Scott) and his elite team of soldiers. But when the decision to scrap the Bat-signal is made and a society soiree marks its departure, the event is attacked by a woman calling herself Alice and her henchman dressed as white rabbits. It all has a flare for the dramatic, but the threat seems very real – so much so that Jacob’s protégé Sophie Moore (Meaghan Tandy) is kidnapped in the chaos.

Jacob thinks of Sophie as almost a daughter, but his real daughter Kate (Ruby Rose) is off in an icy wilderness learning all she can about fighting techniques in the hope that one day Jacob will let her be part of the team. When Kate hears what’s happened, she has ever reason to return to Gotham. Way back in her Academy days, Kate and Sophie were more than friends until Sophie made the choice of career over love.  Now, Kate will do everything she can to save her and prove to her father her worth.

However, Kate’s past is about to collide with her future and memories of the night she believed Batman failed her family will have to be re-evaluated. Because when she breaks into the skyscraper that once belonged to her cousin Bruce Wayne, a legacy is reborn and a chance to make a difference in an entirely new way is revealed…

It’s easy to see the appeal of Batwoman to the higher-ups of The CW and the potential audience. It’s a welcome addition to their primetime line-up that has already achieved some dominance in the action-series ratings. It’s broadly-painted, following the remit of their other hero shows to entertain within a traditional stoic, wham-bang template. This is the kind of outing where there’s a surplus of style but not a huge amount of logic: a scenario where the fact that both Batman and Bruce Wayne have been missing for three years raises not a single suspicion, where breaking and entering into Wayne Enterprises or elite society parties is ridiculously easy and where Luke Fox, hapless guardian of the Bat-secrets apparently makes a better tailor than he does a security guard. Though fun, there’s also a mountain of contrivance, with moved shelf ornaments and family jewellery leading to huge leaps of amazingly unlikely deduction that could only be guessed because of script necessities. It’s the kind of romp that impressively stretches a tv budget but not remotely as far as a feature-film it seeks to replicate, though it certainly borrows elements from all those cinematic outings: a smidgen of Burton and more than a handful of Nolan. It achieves a nice degree of fun and derring-do and a welcome diversion, but equally shows some of its limitations.

It’s definitely of note that this the first of the current wave of superhero-themed shows to have a gay lead, both in character Kate Kane and actor, Ruby Rose.  Rose is a defiant leading lady by any other name and it’s largely due to her grease-monkey swagger and charismatic snarl, not to mention glacial cheekbones, that make her a marketable hero across the board. Having LGBT characters in ensemble shows is a very matter-of-fact nowadays, no longer the focus of any real controversy (outside of the likes of protest groups such as One Million Moms, whose numbers surely fall far below that), but less so as an actual lead.  From early on this is a show that asserts sisters doing for themselves but isn’t adverse to low-level cleavage shots when the moment arrives. The allure of lesbian chic, insinuated or more obvious, has generally been an easier sell for some networks than with a male counterbalance – but there’s a truth to noting that a greater yardstick will be when that network lead is an openly gay man rather than a gay woman.(Alan Cumming in Instinct is probably the only recent example).

The music is good – with Freya Ridings providing some of the more soulful songs as backdrop to the emotional angst  and the action, particularly the hand-to-hand aspects at close-quarters, work well with Rose clearly able to handle herself, even with the able support of stunt-teams and good direction. The supporting cast also go through their paces: Dougray Scott is Kate’s father, in shape enough to run a major anti-crime team but looking more like the man who frowns and  growls orders than action-star he was once on the edge of becoming himself (being first choice for Wolverine way back when before Mission Impossible 2 schedules led to Hugh Jackman replacing him before shooting began on X-Men). Meaghan Tandy is Sophie Moore, the young woman Kane was in a relationship before Moore denied her sexuality to stay in the military (before ‘don’t ask, don’t tell‘ apparently). Luke Fox (Camrus Johnson) is the de rigeur clumsy sidekick, essentially Kate’s assistant without the Pennyworth gravitas) and Rachel Skarsten chews the wallpaper as the mad-as-a-hatter Alice, a woman with her own agenda and grievance for the city of Gotham. Elizabeth Anweis as Catherine, Kate’s step-mom and Nicole King as Kate’s half-sister Mary add some socialite sparkle.

Batwoman‘s opening salvo  (if you don’t count her earlier appearance in last year’s Arrowverse crossover) offers fun and style if not many surprises. Thankfully devoid of the umpteenth version of the deaths of Thomas and Martha Wayne and the psychological fallout on son Bruce, it gives us a fresh character rich with possibilities (if some predictable baggage) but it establishes its credentials with an attitude it just about earns… and there’s at least some potential there for a slightly more rough-and-ready aspect that feels like early seasons of Arrow. It’s hard from the pilot to gauge if the show is a keeper, but it could yet be a guilty pleasure… 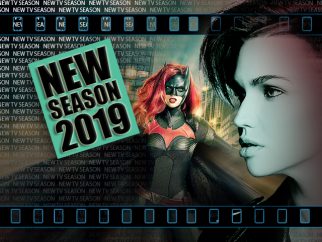