'The Walking Dead' returns to screens, but what real challenges does the veteran zombie show face next?

It’s been confirmed on the eve of the tenth season debut that The Walking Dead will be back for an eleventh run next year and that Lauren Cohan will be returning full-time as Maggie. Neither news is hugely surprising… the show is still at the forefront of the AMC marketable line-up and Cohan’s foray into primetime, after she declined an offered new contract on TWD, proved less successful than she hoped with Whiskey Cavalier ending up… well, on the rocks.

But though it is now heading into its tenth season, there have been times in the not-so-distant past when The Walking Dead seemed to be staggering rather than marching. With lurching, multiple time-jumps and the loss of some major-players (Cohan’s Maggie sent to pastures new, Andrew Lincoln’s Rick being snatched away by a helicopter – but believed dead – and a slew of slain supporting players who found their heads on spikes last year) , there was a sense that audiences were beginning to question whether the end of the end of this particular world was nigh. But the apparently sudden (if long-secretly-planned) ending of the original comic-book that inspired it all ironically came at a time when the television series was finally getting back into less circulatory-challenged ratings. AMC announced that far from the franchise being over, another television series would soon be added to the equation (alongside the autumnal ‘mothership’ and Fear the Walking Dead that runs during the summer months) and, in the longer term, that series of tv movies.  But still…. even the most ardent fans were wondering if  the original show could still keep pace?

The time-jump for the tenth run seems to be around a measeley six months or so  (nothing compared to the six year jump after the loss of Rick Grimes),  the winter storm at the end of the previous run having given way to spring and early summer, the birth of Rosalita’s child and an uneasy sense of becalmed semi-security. There haven’t been any Whisperer attacks and the borderlines have been respected by both sides – but there are those in all the other communities who resent those restrictions laid down by the skin-wearing adversaries and feel the urge to test them in every sense.

The tenth season’s opener, Lines We Cross, is divided into titled chapters, essentially gives a lay of the land, for newcomers and die-hards alike – letting us travel around the various communities and sometimes seeing the same events from criss-crossing perspectives and reminding us of the current state of play. With the loss of ‘The Kingdom’, Eziekiel has a less commanding role, but no less driven. However the return of Carol (who has been off on a sailboat scouting further afield and looking at opportunities for further supplies) reveals that the ex-‘King’ still yearns for his Queen. Carol, on the other hand, has moved on and is seriously thinking about riding off in to the possibly platonic sunset with Daryl who she describes as her ‘Best Friend’. Though many viewers want to see them together romantically, their connection is arguably more profound because of the way they dealt with abuse and self-image before the apocalypse happened… and somehow came out stronger and more assured.

A crashing satellite gives the communities a reason to briefly cross that territorial border, if to do nothing else but stem a potentially dangerous forest fire (and, for Eugene to grab any technology he can), but Michonne always has one eye on the forest and any imminent attack. However it’s not until the moments before the episode’s end-credits that we know for sure that Alpha and her group are still around, a long look of utter hatred shared across a literal chasm by Morton’s psychopathic leader and a vengeful Carol… laying the obvious groundwork for a closer confrontation later in the run.

Aaron makes a relevant point – that while he’s lost people he loves and will defend his friends to the death, he’s begun to wonder about the definition of wrong and rightt – that in everyone’s personal history, it’s usually the ‘other guy’ that’s in the wrong. After all, the problems with the Whisperers – however far they escalated – came from each side  making some aggressive mistakes which came at a cost.  It’s Michonne that ultimately points out that they must never lose sight of who they are and the standards they set and the knowledge of any consequence they are forced to undertake… which boils down to standing their ground but not seeking conflict. However that my be unavoidable.  Then, of course, there’s Negan – now out and about but never unsupervised and even he has some words worth listening to…

It’s all… promising, neither a reset nor one simply for the party faithful, but with plenty of foreshadowing depending on how you read certain references and scenes. It may not bring more viewers in to the fold, but it plays to the strengths of world-building and the power of community. There’s zombie-fighting in the woods and fence-mending elsewhere, enough of both to have made it worth coming back.  Beyond that… we know Michonne (Danai Gurira) will depart some time in this run and even with Maggie’s return (apparently later in Season 10 before being a regular for Season 11), that will be another significant loss. At this point there’s a good, solid ensemble feeling, but only Norman Reedus as Daryl and Melissa McBride as Carol now remain as  original prominent players and Jeffrey Dean Morgan’s Negan is more philosophical than diabolical at the moment…with no real breakout performances to match and that’s something that will hopefully be rectified. 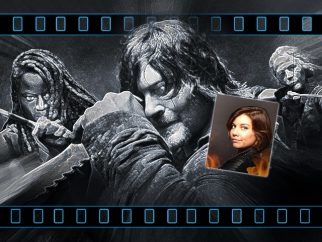 NYCC: ‘Discovery’ and ‘Shorts” tease Trek’s past and future…