For many, he was the most interesting character in classic British sf 'Blake's 7'. The man behind 'Avon', Paul Darrow has died at the age of 78...

EchoChamber is sad to hear of the passing of Paul Darrow at the age of 78.

Though his career encompassed a wide range of roles (in shows including Emergency Ward 10, Z-Cars, Dixon of Dock Green, Within These Walls, The Legend of Robin Hood, Pie in the Sky, Little Britain and Emmerdale and a role in the Bond movie Die Another Day)  for more than one generation, the actor was synonymous with his iconic role as Kerr Avon in Blake’s 7, the classic sf series produced by the BBC in the late 1970s and early 1980s. In a time of white-hatted heroes, Darrow gave tv audiences a truly memorable, laconic, anti-hero – the somewhat morally-ambiguous character, at first the dubious right-hand of the more heroic Roj Blake (Gareth Thomas) and then moving centre-stage when Thomas left the show. Always ready with a snarky put-down and the sense that he was more into personal survival than the revolutionary cause of his comrades, he appeared in all four series of the series (and every episode apart from the very first) and was a regular at conventions where fans of all ages remembered his work.

He actually purchased the rights to the Blake’s 7 series in the mid-nineties and was a driving force for a potential return to the screen. Though that project never happened, he returned to the role of Avon in 2012 as part of Big Finish’s audio-adventures set ‘The Liberator Chronicles‘ during the first run of the series. 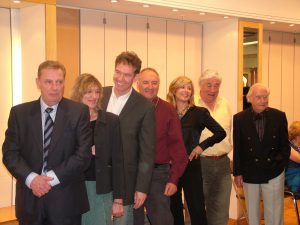 Darrow made his last television appearance in late 2018 on the Pointless quiz show in a special edition that celebrated British science-fiction. Many were shocked to see him in a wheelchair as the news that he had lost both his legs due to circulation problems after an aortic aneurysm in 2014 was not widely known.

(I interviewed Darrow in 2006 at a Collectormania event and he was as charming and as forthright as everyone who has ever met him would also have described him. In fact, while talking to Darrow’s agent at a convention, Thomas appeared from nowhere behind me and rubbed my hair, mistakenly believing I was Darrow from that angle – for which he was immediately mortified!).

“People come up to me in the street. Some know your name, some know your character. Some know some other work you’ve done. But you do get ’You’re him, aren’t you?’ A lot of people say hello to me and I say hello back. What I like is the ’You’re famous… or you work at the check-out at Sainsbury’s’ . Who did you used to be? I thought you were dead?” Darrow told me at the time, with a smile and a shrug.

The Quirk and the Dead: ‘Good Omens’ realises its portent-ial…