The latest 'Twilight Zone' story starts off promisingly enough but can't keep up the tension...

It’s Christmas Eve in Iglaak, Alaska and the small community’s annual party at the sheriff’s station is underway. Each year, the local police captain Lance Pendelton (Greg Kinnear) extols the virtues of his own beliefs and takes pleasure in benevolently ‘pardoning’ some minor crime.  Innuit Officer Yuka (Marika Sila) has no real love for her boss, but is bringing in her brother for being a little ‘drink and disorderly’, knowing full well Pendelton will let him go and probably give him some of their party food. But it turns out there’s another person in the supposedly empty cells… a man who introduces himself as an ‘extreme tourist’ and who calls himself ‘A. Traveler’ (Steven Yeun).

The stranger explains that Iglaak and its police department are famous on the web for their annual traditions and he’d be honoured if Pendelton ‘pardons’ him. The police captain likes the idea of being famous, but Yuka is far more wary… and as it becomes clear that ‘A. Traveler’ knows more about the townsfolk than he should and can easily turn them against each other, the questions mount up.  Who is he and why is he really here?

For much of  A Traveler, the latest in the revamped Twilight Zone, there’s a distinct Stephen King feel to proceedings and that in itself keeps the viewer invested. But while the idea of a sinister stranger bringing out the darker side of small-town inhabitants, testing their moral compasses and divided loyalties is a ‘Castle Rock‘ staple, this entry doesn’t quite deliver on the familiar but potent promise with which it begins.

Steven Yeun, so very late of The Walking Dead, does fine as the mysterious stranger who appears in the local police-station cell and then reels in Greg Kinnear’s vain, overtly religious and pompous sheriff with perhaps too much ease, but playing to the lawman’s obvious weaknesses. Kinnear is just as good at playing the flawed and compromised lawman – making us dislike his police officer rather than hate him.

The directing by Ana Lily Amirpour’s (A Girl Walks Home Alone at Night, Legion) is decent enough, but the story by Glen Morgan (The X-Files) feels like it wants to say something about human nature but isn’t quite sure what it is. There are echoes of the classic episode The Monsters are Due to Maple Street, which spoke to the power of paranoia to help fuel an invasion, but in an era when claims of ‘fake news’ and media manipulation are topical powerplays, A Traveler doesn’t quite hit the mark as well as it should. The episode is initially interesting and mysterious in and of itself, but after a smooth set-up it lacks the important finesse of King or other storytellers who would reliably  bring more to the nuances of their rogues’ gallery and to the way all the elements fit together – or don’t in this case.  It’s fine not to trust Yuen’s car-salesman-smooth manipulator as we watch him create social chaos at the office Christmas party, but Marika Sila’s skeptical deputy isn’t given the depth to offer a strong counter-balance. We know she dislikes Kinnear’s sheriff  and his attitude to her own culture being demeaned – and she isn’t immune to Traveler’s planted seeds of doubt (real or inferred) – but she’s presented as the rational voice for so long that when the episode vaguely asks if her own viewpoint has been compromised by self-own interests as well – and leaves the answer hanging – it just doesn’t sell as well.

Frankly, like all the Twilight Zones episodes of the new run, it’s as if something is just a little off – that we open on a good idea, start to develop it in interesting ways, assign all the right talent… but somehow it collapses under the third act curse of ‘Cool. But then what?‘ Episodes thus far have been too long, had needless epilogues or have simply missed opportunities. Here, A Traveler can’t quite deliver beyond the impressive mood music and, as it sheds more and more of its subtlety, it also loses its centre with Kinnear and Sila  racing off in competition to each other without it being wholly clear of their stance and consequences – except they’ve been played as the aliens now know the location of a nearby military power grid.  There’s other nods towards Twilight Zone entries of old and the now signature ‘1015’ numbers turns up as the entry code to the jail-cells but it all feels very much like a ‘first-draft’ story.

So far the new Twilight Zone is surviving on brand recognition and the momentum of Jordan Peele, but it needs to be genuinely more clever and finessed if it wants to be ‘Sixth Sense Shyamalan and not ‘Happening Shyamalan‘. 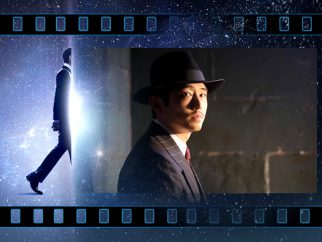