The latest Trek series finishes its second-run with a major-shift in its future, yet fully embracing its nostagic roots...

With ‘Control’ moving in to get the Sphere and retrieve the data that could lead to cosmic extinction, the battle is on and a war for survival begins. It’s the Discovery and the Enterprise vs. a fleet of Ai ships and no way to summon more help. Burnham and her colleagues race to get the Red Angel suit ready so that she can navigate herself and the ship into the future and out of Control’s reach.

But time, almost literally, is running out and as everyone enters into the fray, some with some very personal scores to settle, it seems that the obstacles may be too great. However there may be allies on the way that could help swing the odds in humanity’s favour. There are still going to be casualties along the way and even if the Discovery succeeds, what will the cost be on a personal as well as cosmic level?

The brilliance of Star Trek: Discovery has been the mixture of old and the passion with which it is delivered. However the problem with Star Trek: Discovery has continued to be that while it had a solid cast capable of giving strong performances, great directors able to conjure up viewpoints, movements and transitions that sometimes rivalled their big-screen cousins and a hard-worked SFX crew able to achieve the same…  it consistently felt as if the writers had thrown every idea they had the script without really considering how it hung together.  Ironically, early critics of the show pointed to the limitations of Discovery‘s central conceit being inconsistent with its placing in the mythology. The contradictions of the technology available both in the practical making of the show and its in-universe continuity immediately placed restrictions on what could and could not be done if the show was to remain in  ‘canon’ behind the days of Kirk, Spock and Picard. For the second run, it was if the writers’ room had been given the secret remit to dispose of key, definitive elements (bye-bye, spore drive)  if the show were to be renewed then it would be shaking off all those shackles and that the scribes should embrace every. single. opportunity. to send love-letters to nostalgia before that happened… because undeniably many of the strongest attributes of this second run were those involving Christopher Pike, the Enterprise, easter-egg references to classic Trek and regularly glancing backwards before boldly going forwards.

Who knew all those years ago when I attended a truly bizarre press conference for a Britney Spears vehicle called Crossroads, that the unlikely named Anson Mount (who was the ingenue’s love interest in the film) would, a few decades later, be delivering such a key and memorable performance. The role of Christopher Pike could so easily have been fumbled or caricatured and yet turned out to be a cornerstone of the run with the stoic Mount being one of the stand-outs of the 2019 run.  Equally, casting yet another actor in the role of Spock could have been a poisoned Vulcan chalice as Leonard Nimoy was such an icon and Zachary Quinto did a sterling effort in the reboot films. But Ethan Peck, though not always served by the achingly-slow-pacing of his reveal, eventually mastered the role and became a worthy part of the Trek lineage. Placing both Peck and Mount on a washed-and-brushed-up, but somehow still truly reverential Enterprise bridge in the closing chapters was a masterstroke but may have also been a double-edged sword… because it’s telling that as the closing minutes of Discovery‘s second season rolled out, I can’t have been the only on who felt just a tad guilty that I would have been just as happy to keep boldly going with this pre-Kirk Enterprise crew rather than leap into the future with Discovery’s.

Such Sweet Sorrow (Part 2) is a jigsaw of interesting set-pieces almost all drawn from cultural familiars, Trek‘s past triumphs or setting their compass to guide us there.  The obvious love and affection for The Original Series elements aside, there’s a space battle that is essentially The Next Generation‘s memorable The Best of Both Worlds on steroids (though not with the predicted Borg connection that some were not unreasonable theorising) with even a touch of Babylon 5‘s Endgame climax. Among the 2001-and Interstellar styled dimension-ripping,  the effects as Discovery heads to its event horizon are surely a nod to Star Trek: The Motion Picture. And let there be no qualms about the fact that Burnham’s Red Angel suit is essentially cosmic Iron Man.

One of the best scenes in the episode that must get applause was actually all down to that aforementioned clever use of camera-work – the anti-gravity between Control/Leland, Georgiou and Nhan would have cost a fortune with lots of wires and CGI, but is excellently created largely by a use of turning a corridor-structure in one direction while revolving the lens in the other – giving the impression that the participants are unencumbered by consistent weight. It was a brilliant creative decision that pays off well.

But narratively, the second season has been a conveyer belt of ‘impossible challenges’, ‘fateful decisions’ and massive plot-holes – often fretted about for ages and then solved far too easily with a line of dialogue or the appearance of a sudden plot-device  (the Red Angel suit seems to be made from impossibly, incredibly advanced technology – fine, hey, we’ll just build another one in the replicator – how hard can it be; this unexploded bomb’s about to destroy the entire ship – fine, we’ll just close the door; our relationship’s on the rocks because I was resurrected and now want some distance – wait, I’ve changed my mind again and I’m all in!). Some of these are used for fair dramatic effect and work well – some are clearly there to artificially extend running times and too often it’s been obvious which is which. It’s also worth noting, that almost all the ‘shock’ big reveals (Michael as the Red Angel, Discovery moving forward in time etc) were guessed well in advance.

And so we reach the end of what now feels like a  huge prologue. The decision for the Enterprise crew to remain tight-lipped about what Discovery did in its ‘dying moments’ is understandable in some respects, but the wider scope – that Spock narrates – about Star Fleet’s decision to erase all pertinent details from its records that the ship, its crew and its spore-drive ever existed speaks more to retro-fitting an in-universe reason why we’ve never heard of such elements in previous/later shows, than it does to actual internal logic. Michael Burnham initiated a massive Klingon-Human War in which Discovery helped save the day and the ship itself was supposed to be the design of ships to come… and now… what?… there’ll be a giant tumbleweed, gaping hole and awkward silences when the subject is even whispered about? That’s hard to swallow logically, but realistically easier to digest and deliver when the show won’t have to deal with any of those consequences in its future setting.  But there are questions:  If Georgiou is on the future Discovery, how can she be heading up the ‘contemporary’ Section 31 spin-off? If  the whole  idea was to separate ‘Control’ from the Sphere technology, then isn’t having the remains of both in the future a real problem rather than a great solution? And if Control is done and dealt with – as Georgiou confirmed before they made the jump – then was there any point making the jump at all? And just how many crew-members ended up going to the future – certainly more than the bridge crew, certainly less than a full deployment? And, wait, what is Number One’s real name?

Less anyone think otherwise from the quibbles above, I’ve really liked the show and watching Star Trek: Discovery, despite some frustrations over the connective tissue and pacing, has been huge amounts of fun in and of itself  and a big improvement on its first season. We are very likely in a new golden era for Trek as a whole, particularly with the wide-ranging plans and wmpire-buildineahead. The confirmed third run will probably end up being the make-or-break factor with the cast and stories no longer a slave to/crutch for the continuity stabilisers it’s had available to date.  Discovery‘s only hurdle now will be producing a story arc that’s less convoluted and better paced and to stand entirely on its own merits which – with the talent involved in front of and behind the camera – should be do-able. 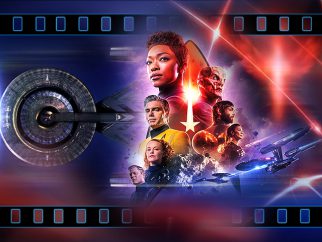 Cudgel Me, Elmo? (How Sesame Street GOT some Respect!)