The third episode in Trek's latest 'Discovery' has several points of light but lacks focus as, once again, there's a tonal shift...

The repercussions of decisions made by Tyler (Shazad Latif) come home to roost as turbulent power-grabs remain the order of the day in the heart of the Klingon empire. But can even L’Rell (Mary Chieffo) protect him when the ‘Mother of Klingons’ has a pertinent secret of her own? Meanwhile, on the Discovery itself, Michael’s quest to locate Spock continues with help from an unexpected visitor and some compromised medical reports and Tilly’s has trials and tribulations with an unexpected fellow-traveller of her own, one that could not only derail her dreams of command but endanger the ship…

As mentioned before, Discovery‘s season one fault-line was not in its lack of quality, but rather in trying to be too many things – a supernova of ideas and attempts to cater for different potential audiences – but not always tying such together without the erratic stitching showing. And so it is that a series that felt like classic Original Series Star Trek only last week, makes a warp-drive handbrake turn and spends most of the third episode as if jonesing as much as the rest of us for the return of Game of Thrones.  It’s not that it doesn’t hand it reasonably well, it’s simply the feeling that I’m suddenly watching an entirely different show each week and it is hard to anchor the loyalty and must-see factor when I’m not sure which tone I’m going to get.

The third episode, Point of Light, has no real centre per se. The majority of the screen-time is Klingon-based, but distinct chunks are also devoted to the search for Spock and also’s Tilly’s mysterious ‘passenger’ and there’s really no connective tissue between them to create a decent orbit.

The Klingons, complete with ever-crazy craniums, were a divisive element of the first season – their radical ‘white walker meets kurgan helmet’ redesign as controversial as the focus on their internal power-struggle. I can’t have been the only viewer quietly hoping that any revisiting of the story-thread would be brief background noise , but at least for the third episode, it’s front and centre and unapologetic as the various houses vie for the iron throne and pretend not to notice another evolutionary shift (excepting one line of dialogue about hair-care).  Shazad Latif’s radically-reinvented and man-bunned Tyler feels like Khal Drogo-lite, though he’s certainly more pro-active. The fighting  isn’t quite on a Westeros-level of authenticity, but is decently choreographed in close-quarters and (spoiler) Georgiou/Michelle Yeoh’s blade-wielding entrance as a deciding factor when all seems lost is certainly memorable. However with news that she’ll soon be headlining her own Section 31 show, this does feel like a showreel and traditional focus-shift  for a shuttle-bay back-door pilot and, ironically, there’s a hope that this is what it proves to be rather than a springboard for yet another main story-thread for the main show.

Three episodes in and Discovery remains watchable and full to the brim of potential. There’s quality people involved on both sides of the camera. The nay-saying, pot-stirring rumours of sudden cancellation are blatantly ridiculous given the decent ratings and high profile (though there are days when the radical wing of Trek fandom can make Star Wars and Doctor Who fans a run for their money) but once again, it needs to remember its placement in the Trek universe (not just with tone, but with some of the tech that defies the internal logic of continuity) and ultimately decide what it wants to be.

This is not an inexpensive show and to definitively secure a third season in this new resurgent age of Trek, it will need to settle into a specific groove. 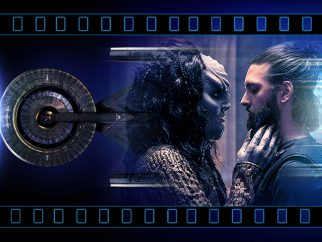