Oh 'Brother' what art thou? Is Discovery's second season opener a continuation, a soft reboot or boldly going somewhere new? The frontier is open to all possibilities...

Fresh from circumventing the Klingon/Federation War and surviving the machinations of their Mirror Universe counterparts, the crew of the Discovery find there will be no shore leave as they are visited by Captain Christopher Pike (Anson Mount) who says he is there to assume command of the vessel.  Strange cosmic lights have simultaneously appeared in different parts of the galaxy and the Discovery is the best equipped ship to speed off to look at them.

However, Pike’s Enterprise  – now in dry-dock for a while – is also missing its Science Officer, Mister Spock who has been absent for some time, but whose disappearance may be linked to finding the secret of those mysterious lights. As Pike, Michael Burnham (Sonequa Martin-Green) and the Discovery crew race to save a crippled vessel, everyone must start to evaluate the new status quo and decide if the Discovery is still their home.

They can boldly go or bravely stay, but for everyone their past decisions may inform their future… if they – and the universe – have one.

Discovery‘s main obstacles in its first season were two fold, but linked: the expectations of its audience and the expectations of its production unit – both of which had reason to feel that the foundations, whilst pictureseque and interesting, kept shifting. Bryan Fuller left early in production with the explanation of  significant if at-least-reasonably-amicable creative differences and the whole project was delayed by a number of months. Not unusually for the entertainment business, some sharks began to circle, smelling blood in the water and wondering if the Trek universe’s return to television was ever going to happen – especially as its home on a pay-for-view platform would always be affected by those who had to be persuaded to actively purchase the right to watch.

Confidence was said to be remaining high at CBS and the casting seemed interesting. The Walking Dead’s Sonequa Martin-Green would be the lead character with Jason Isaacs, Michelle Yeoh and Doug Jones all playing pivotal roles.  When the show finally made it to screens in January 2018, the reception was also mixed. What could have been a strong feature-length pilot actually became the first two episodes – meaning the opener was less satisfying and well-paced. Green’s Michael Burnham was immediately less than sympathetic, the Klingons were so radically redesigned that some purists bristled and even the most open-minded fans must have flinched slightly at the first mainstream ‘fuck’ in the Trek universe a few weeks later.

It felt like there were lots of great ideas and good intentions but that rather than fitting together perfectly, they were all competing for prominence not least with a Klingon War and a Mirror Universe sojourn looking for equal air-time. There were strong performances and some neat twists, but  I remember one conversation with a fan at the time saying it was a show that wore some of its Trek roots on its sleeve yet remained somewhat easier to watch if you took it as a completely different animal.

It was clear that from the mix and match of ideas and the shrapnel and debris of its climax – all of which were rich with potential – Discovery‘s second season would have some choices to make about where to boldly go next.

The second season opener, ‘Brother‘, is dazzling on the eye, full to the brim of derring-do, packed with mythological easter-eggs and laden with tantilising hints over where the story can and will go next… in short there’s everything to recommend watching it (be you an existing Discovery fan or one who is late to the party, there’s a helpful recap at the start). However, there’s still several storylines on stand-by and it’s still not entirely clear if the show has shed its stance of wanting to simultaneously be all things to all viewers – to lean to the future and the past and more strings to its bow than a Vulcan harp.  A show where several characters dress in those classic Trek primary colours, but you hear someone say the word ‘Shit!‘ is still arguably a case of being… well, a….. little schizoid, man.

In some ways this feels like another have-all-the-good-bits-and-blend-them-with-better-tech reinvention of the classic Trek but, arguably, a slightly more organic tweaking than J J Abrams wholesale recasting of an entire bridge crew and key iconic characters. Here Anson Mount brings exactly the kind of square-jawed stoic heroism we want for the incoming Captain Christopher Pike, the captain who pre-dates Kirk as captain of the Enterprise and who quite brilliantly walks the line between genuine inspirational leadership and also a self-deprecating sense of irony. But the glimpses we previously had of Pike (in  The Cage / The Menagerie episodes of the Original Series) were limited and so there’s a freedom for Mount to make it his own. By the end of the first episode we haven’t seen anything but a sneak peek of Ethan Peck’s Mr. Spock to evaluate where he falls on the Quinto-Nimoy Scale of Inscrutability, so that’s all to play for. Equally, we know Michelle Yeoh’s enigmatic Georgiou is on her way back, Shazad Latif’s Ash Tyler will reappear, the Klingons are just off camera and there’s indications of developments regarding the ship’s cosmic warp drive to come.

There’s seemingly something for everyone with Discovery‘s opener and teaser for forthcoming attractions. In many ways that’s the highest recommendation and still its potential Achilles heel – as with the first run, its ‘going boldly’ success will be on what it ultimately settles on for its primary, ongoing mission statement and tone because you CAN have too much of a good thing. In the mixture of myriad potential and possibilities on offer, it will need to strip-mine its priorities, define those choices and navigate them without tilting towards too many distractions along the way. The main Discovery crew are smartly and formally name-checked to make sure we know each and every one of them – a fair point being even the most die-hard fan couldn’t name all the bridge crew from the last season. And mainstays Doug Jones (as Saru) and Mary Wiseman (as Tilly) have grown in to their fan favourite roles well. Anthony Rapp as Stamets still has lots to do and makes the most of every scene and James Frain as Sarek remains every inch as imposing and diffident as he needs to be and Mia Kirshner’s Amanda is intriguing. Comedian Tig Nataro’s appearance as the dryly-humoured Jett Reno was also a delight and worthy of revisting. Frankly, it’s great that Discovery‘s characters are good enough to hold centre-stage and hopefully the overt dips into cosmic continuity, delicious though they are, won’t make the crew simply fellow travellers in their own show.

Trek seems to be entering a resurgence of quality and diversity and the Discovery is its flagship in more ways than one.That’s to be welcomed and applauded.  However placing its continuity at the start of the Trek mythology rather than later is an interesting, but still potentially restrictive move that the show is pushing against to varying degrees.  There may be speed-bumps along the way, but its hard to knock the enthusiasm and it’ll be fun to watch them navigate that cosmic flight-path. 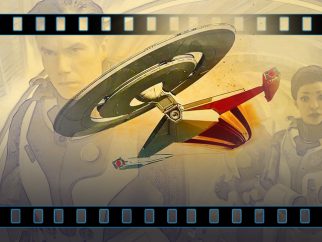