Future Imperfect, Past Tense: 'Travelers' is the time-travel show that sticks around to pick up the pieces... Season Three is on Netflix now.

A century from now, the entire world is on the verge of collapse, destroyed by a combination of natural disasters and human conflict and an initiative to change the course of history has been devised.  An almost omnipotent artificial intelligence (known as ‘the Director’) has been built and managed to create a way to send people back in time. They do so by taking over the bodies of people in the ‘past’ (our present) in the seconds before they were due to die, never taking a life that was destined to continue.

These ‘Travelers’ have arrived in the Twenty-First Century and existed in secret from most of current humanity, their various missions – sometimes small, sometimes massive are never without personal risk and consequence. Even those closest to the Travelers are unaware that their loved ones are literally not the people they once were.

But not everyone has the same view of what the world can or should be and though ‘Agent Grant MacLaren’ (Eric McCormack) and his team of fellow Travelers have faith in the Director’s missions, it’s become increasingly clear that such guidance is not infallible or without personal cost. As a subversive war for humanity and the hearts and minds of the future operatives increases, MacLaren and his team will each have to decide where their priorities lie and how far they will go to protect a future that seems impervious to change…

Travelers is – and I mean this wholly as a compliment – the Deep Space 9 of time-travel shows. While others genre series dip in and out of important, recognisable events, rushing off to new adventures and missions with exotic ships and ‘shipping, Travelers is the show that sticks around and deals with the collateral damage – emotional and literal. Travelers deals with the aftermath of the big decisions, the ripple-effect on both big and very personal levels, the idea that there’s always an uncertainty about expectations, a cost to absolutely every decision and the chances are it won’t always be a good one. The series, once hard to find and watch en masse outside its native Canada, now has the full backing of Netflix and its domestic and international audience can all experience it at the same time with all Season Three episodes now available – though it’s a show that probably needs you to watch its two prior seasons to get fully invested.

Years ago, when visiting  show-runner Brad Wright on the Bridge Studios set of Stargate SG1, I noted that SG1 was a ‘reliable’ series – again, meaning it as a compliment – in the sense that while many shows veered from highs to lows in quality, the fan-favourite had found a particular, satisfying niche and almost always managed to deliver what its audience wanted, no mean achievement for a franchise that ran for so long. Now, a further decade on, with Travelers, Wright has delivered a show that feels edgier and far more cynical and almost the complete flipside of the equation, often subverting what the audience thinks and thinks they want. And yet, he’s done it again – giving a loyal audience every reason to keep coming back. Yes, there’s now some adult language and violence (not on Game of Thrones levels, but what is?) but all the more effective because they are organically included rather than put in to be controversial for the sake of it. There’s a maturity of vision and the ways to deliver it. Series 3 of the show, released this month onto Netflix with only half the fanfare it probably deserves, will absolutely have you binge-watching over the holidays and shouting at the screen in a way that doesn’t happen unless a show has hooked you in and made you care.  It has done that by working a slow-burn strategy over its previous runs, never standing still but able to punctuate its run with the big events ™ needed to be averted/changed/guaranteed while essentially making the shifting group dynamics feel far more important.  While it’s possible to second-guess some of the story elements and potential sleights of hand in some of the story-arc beats that Wright and his team deliver, certain episodes may well catch you entirely off-guard, zigging when you expect them to zag and sometimes quite mercilessly playing with your loyalty like someone who’s attended the Joss Whedon School of Emotional Manipulation and just asked you to hold their beer.

The show has a habit of plunging headlong into difficult scenarios that other shows might avoid and then exploring the outcomes. What exactly is defined by the ‘greater good’ when lives are at stake? Should one innocent be justifiably killed to stop millions dying? However well intentioned, is the ‘over-writing’ method the Travelers use completely ethical? There are also compelling specific scenarios such as what happens to the idea of  ‘justice’ when a traveler with an urgent mission takes over the body of a serial-killer who has finally been captured?  Season Two had left our team in a precarious position with the first ever Traveler (who had been destined to end the experimental ‘rewriting’ as a 9/11 casualty) having gone rogue and exposed their identities to their loved ones and possibly the entire internet. But… visitors… from the future… who is going to believe that… right?  It turns out the FBI senior brass actually does and so begins an era of some reluctant cross co-operation and some emergency action to hide the truth.  It’s an imperfect arrangement and solution and you just  know things are going to get messy. 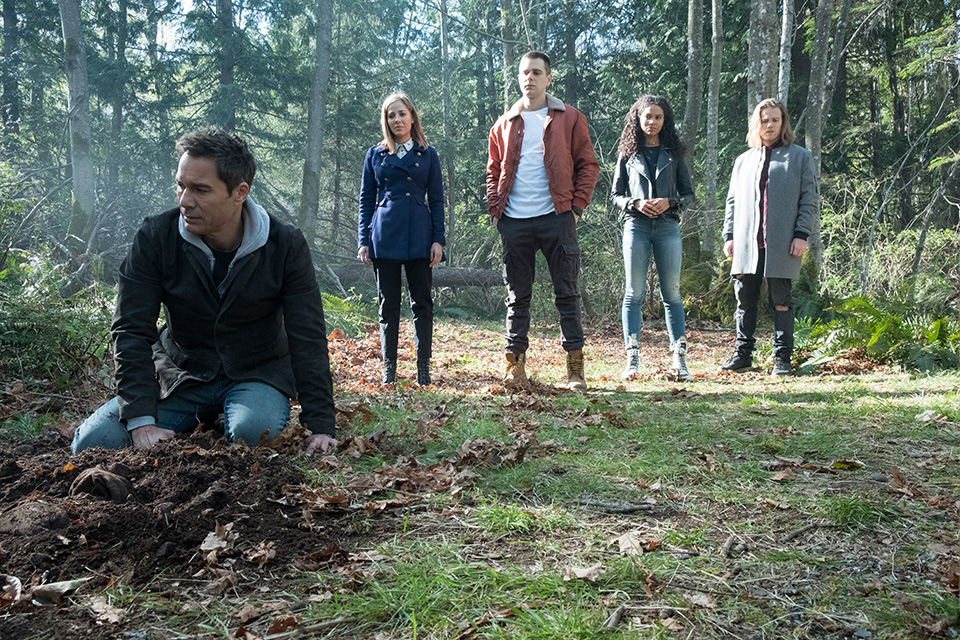 Eric McCormack, best known for his razor-sharp comic delivery in Will & Grace, gets to frown much more for this show but continually succeeds in making FBI Agent Grant MacLaren a well-rounded team leader, still able to shoulder deep responsibility and conviction yet tired and sardonic with the best of them. He was definitely the ‘name’ on which the original series was sold and could easily have been the best thing about it, but it’s a strong indication of his ability and the show’s strengths, that it became very much an ensemble show (with McCormack stepping in to direct several episodes as well).  Stargate alumnus Amanda Tapping has also proven her worth as a tv director of note (working on the likes of  Supernatural, Dark Matter, Siren and Van Helsing) and despite a brief appearance in front of the camera for the show, her contribution to most of this latest run is helming four strong episodes that prove just how well she knows her craft.

Actor and singer MacKenzie Porter is strong as Marcy, the medic of the team who shoulders more and more responsibility as the series progresses; Nesta Cooper’s Carly also gets some more layers, emerging out from the domestic tribulations of the past run and being even more pro-active to the point of being confrontational. Jared Abrahamson, as Trevor,  is given some great material to work with for Season Three and the idea that though he looks the youngest, he’s actually the oldest of the Travelers (with multiple lifetimes) is explored much more and poignantly at various points (especially in the seventh episode ‘Trevor‘ which also boasts a guest-starring role for blues legend and Highlander regular Jim Byrnes).  Reilly Dolman as the group’ historian (a full-time job) is also interesting and his viewpoint of the various ways things could play out is an interesting wrinkle in time-management. Jennifer Spence’s Grace – socially-awkward and thick-skinned to the point of ambivalence – is great fun to watch and cringe for and she gets to share the screen in a couple of scenes with her real-life husband Benjamin Ratner.

Ironically it’s another Vancouver production mainstay (and Stargate Universe face) Patrick Gilmore and his performance as regular 21st century guy David Mailer that provides some of the most memorable moments of this latest run. David is amiable, good-hearted, positive – a social worker who is driven to help people simply because that’s the decent thing to do  – and in a story with its fair share of action and drama, he’s the character most like us, though we’d probably deny it, mumble awkwardly and wander off in search of a punchline. Gilmore sells every scene he’s in with consummate skill whether it’s his terminal befuddlement at why the obviously Marcy stays with him (because she loves you, you idiot!)  or the moments of quiet bravery when he simply does the right thing because it’s the right thing and for wholly good intentions. As Marcy notes, David is probably a better ‘human being’ than any of the actual world-weary team.

Sometimes the show has so many moving parts that not all of them get serviced and there’s definitely a case that a longer season might have allowed us to explore side-plots such as Carly’s abusive neighbour, the machinations higher up the FBI’s levels of command and more of the dynamics within the ‘Faction’ – who, let’s face it, may have some valid arguments if not methods, but all have their moments along the way.

At the time of writing, it’s not clear whether there will be a fourth season of Travelers (from a glut of recent time-travel shows, 2019 could be noticeably devoid of most of the current batch).  Though the final moments of this latest run could be considered an ending of sorts – bittersweet and/or satisfying depending on your mileage – the show has worked its way out of dramatic chronological cul-de-sacs and drastic remit pivots before and if the quality can be maintained, it would certainly be interesting to see where Wright and his fellow travelers would possibly go next. That being said, as noted with Timeless, there’s inevitable increasing baggage that comes with an ever-contradictory and complex, shifting mythology and it’s sometimes better to quit while you’re ahead…so if this does, unfortunately, turn out to be the end of the journey, there’s every reason to believe it will stand the test of time as the time-travel show we needed and deserved. 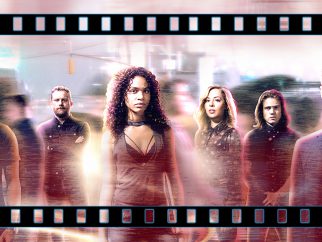