Matter, anti-matter, doesn't matter.... the latest Doctor Who episode 'It Takes You Away' has a Nordic collision of the brave and the bizarre...

If the soil and plants – and their taste – are anything to go by, the Doctor is relieved that the Tardis has arrived back on Earth in contemporary times, even if it seems to have taken a diversion to Norway. When a seemingly deserted cottage attracts their attention, it soon becomes apparent that its sole occupant may need their help. A young blind girl, Hanne (Ellie Wallwork) says she’s been left alone in the house ever since her father, Erik (Christian Rubek),  disappeared a few days previously and that she believes he’s been taken by a monster that comes at night.

Though they can’t see any monster, there’s definitely sounds coming from the forest and a sense of impending doom. But when she finds a mirror in one of the rooms that doesn’t reflect what it should, The Doctor begins to suspect that the danger to Erik and Hanne may come from something and somewhere else. But what really lurks beyond the surface of the mirror and what cost will be needed if an entire universe needs to survive?

If the current season of Doctor Who has felt decidedly safe and templated, then It Takes You Away certainly seems to go out of its way to defy that description.

In a story that seems more Steven Moffat and Douglas Adams than Chris Chibnall and Jamie Childs, there are almost too many ideas at work here and, similar to the dangers cited in the episode itself, when they collide and attempt to interact there are weird and unexpected consequences.  There are times when it feels like two entirely separate scripts have accidentally been printed out as one, a MadLibs conundrum that perhaps works better in the bizarreness of the moment than it does with any exposition, explanation and reason applied.  We begin with what feels like a Nordic thriller with a home potentially under siege in the middle of nowhere, transition into the story of a blind girl facing down a monster that stalks the land which feels almost fairy-tale in style, head through a magic mirror, meet a ‘goblin’ and then face a moral and scientific dilemma in a world that’s like our own but forever separated. Any one of those elements could have made the pivot for a single outing – together they can both complement and conflict.

It’s also an episode with interesting, if not consistent production design decisions. Most subtly, everything that happened in the mirror portal world appeared to have had the filmed footage flipped (ie: it wasn’t a case of tweaking hair and clothes an some props to emulate it). Though it’s more obvious in Erik’s ‘Slayer‘ t-shirt reversal, it takes a few seconds longer to understand why the likes of Bradley Walsh and Jodie Whittaker look slightly ‘off’. It’s not just their hair-partings but the slightest natural asymmetrical nature of their faces. (Either by fault or design, Whittaker’s hair returns to reality’s version before she does when she has her final face-off with a new ‘friend’). It’s a cheap but effective trick and a good creative decision. But yes, when it comes to creative decisions, one suspects that ‘the Frog’ is going to be a whole different level of discussion. In a sequence where CGI post-production could really have come into its own, especially given  that a) the rest of the episode is cleverly budgeted to shoot in what looks like a Centre Parc’s chalet and a small section of in-studio cave corridor  and b) the idea that this universe reflects the will of its inhabitant… the effects for the Frog-version of this universe’s main power are bafflingly low-key, almost embarrassingly so…. We’re left with what feels like rushed ADR and an amphibious antagonist puppet that would give the rod-controlled spiders of Metebelis Three a run for their money in the ‘you could make this at home’ stakes. It’s so ridiculously and cheaply designed that even if an intentional artistic choice rather than one foisted by time or budget, it’s jarring. Just imagine a more cosmic-rendered toad at least…or better still, what a quick visit from a familiar-faced guest-star of old might have brought… and it’s hard to rationalise what we got.

In more general terms Whittaker has far more to work with emotionally this time than in anything she’s had so far. There’s a bit more fire in her belly, a little more anger and sadness to temper the usual buoyant and happy-go-lucky persona that’s prevented the role from having some of the weight it needed. Though we’re once again into stories that conveniently use previously unmentioned touchstones from the Doctor’s history (the number of grandmothers, a fairytale that just happens to be exactly the needed explanation for the strange events) we do see The Doctor being smart and intuitive. If not always in control, she’s at least leading and pro-active.  Her writing out instructions and uncomfortable truths to her friends so that the blind Hanne won’t hear them spoken aloud is clever, strategic and chilling in equal measure.

The now reliable Bradley Walsh, once again faced with losing Grace under pressure, handles the heavy emotional lifting with aplomb. Mandip Gill’s Yaz shows some of the people-handling skills she’s learned as a police-officer (yay, for her profession actually getting referenced and being useful again) and though Tosin Cole’s Ryan is largely on baby-sitting duties, he has more to do than he’s had for a lot of episodes. He still seems like the least defined, least-useful character of the over-sized regular team but we finally have some pay-off to the familial link to Graham when he calls him ‘grandad’ for the first time.  Guest-star and genuinely blind actor Ellie Wallwork plays Hanne with just enough vulnerability and steel and a determination not to be confined by her loss of sight. Christian Rubek as her father Erik has less to work with and the character’s logic for how much time he’s spending away from Hanne quite rightly earns him more scorn than sympathy from our main cast. Kevin Eldon as ‘Ribbons’ is a delightful creation, full of ongoing potential, but ultimately somewhat wasted.

Some of It Takes You Away is great, some of it less so and all of it could have worked better if its focus hadn’t been fractured between so many prisms of story-telling, but at least it feels as if Doctor Who is taking some chances and finding a little of its nerve again. It’s taken almost the entire season to do so and much of the overview of this latest run will depend on the strengths of the finale and New Year’s Day special. 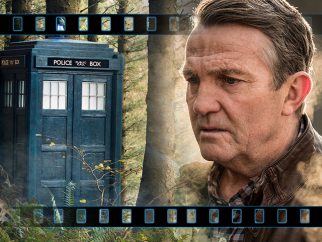 7.5
'Doctor Who - It Takes You Away' - tv review
Tags
Doctor Who
Categories
TELEVISION REVIEW
SHARE THIS ARTICLE
OLDER ARTICLE