Nihilistic but whimsical, 'Sharp Objects' family-feuding mystery is like 'Hereditary' without the supernatural elements...

Camille Preaker (Amy Adams) is a talented yet troubled journalist whose drinking is looking more and more likely to upend any chance of a notable career. In an effort to give her space and opportunity, her boss Frank Curry (Miguel Sandoval) assigns her to cover a murder story of a young girl in her home town, Windgap, Missouri, hoping that the local connection will give the paper a unique angle.

But Camille’s childhood and its heartfelt losses have a lot to do with her addictions and while she initially plans to be in Windgap for the minimum amount of time possible, it isn’t long before her return starts to rekindle old feelings, both positive and negative, amongst her estranged family and one-time friends.

As another young girl is found dead and her relationship with her own mother, town maven Adora (Patricia Clarkson) fractures even further, Camille has to work out whether her presence is doing more harm than good or if leaving her past behind her may cause more casualties… Either way, history has a way of repeating itself…

Hell, they say, is ‘other people’ but it’s a truth universally acknowledged that ‘family‘ can have a specially-reserved hot seat there. However good your relations with blood-relations can be, there can be something innately and intimately dangerous about people who know your strengths and weaknesses on a close-quarters level and actively use that knowledge to twist the knife… and to such truth great plays, books, films and wars have been built around that. Sharp Objects may not be an addition to that which will be remembered for eons to come, but it is a mini-series melodrama that stirs that particular cauldron of concoctions with all the passion, skill and foreshadowing of a Macbethian witch.

There are times the HBO mini-series, based on the book by Gillian (Gone Girl ) Flynn and steered by Marti Noxon (a consistently talented and driven writer and producer who has come a long way since her Mutant Enemy days – much of her subsequent work has also touching on female empowerment) meanders too much for its own good, gliding along in a satisfied self-medicated haze of its own making, barely dodging oncoming traffic. It all makes a fine character-study in distress and dysfunction – with Amy Adams’ Camille both smouldering and wallowing in her character’s self-destruction – but by the sixth episode of the eight-episode run there were probably many viewers aching for it to gain momentum and direction rather than circling the drain. Small-town politics and relationships can be fascinating, never moreso than when powered by large amounts of alcohol and mea culpa regrets but for a story which involves solving a couple of nasty murders, far more time was being spent on fractured families and longing glances than actual detective work. And, frankly, you can only watch a certain level of self-harm without starting to feel the pain yourself.

There are also times when you’re lifted out of the story, often when artistic license and choices trump actual logic.  Some montages of Camille’s drunk-driving revisiting of her childhood work better than others – beautiful to look at and edit but on several occasions – such as when such wrap up an individual episode – it was not always easy to work out what was happening –  nightmare vision or actual plot-point? Camille’s self-harm and writing in to her own flesh is both a horrible and an arresting visual, but when you see the words of self-disgust scarred between her shoulder-blades and the small of her back, there’ll have been more than one viewer who paused and thought ‘Wait, how is that even physically possible?‘

Adams leads an extraordinary cast who successfully submerge themselves in often unpleasant or at least hard-to-like characters. She allows herself to be exposed physically and emotionally (camera angles preserving small amounts of modesty without feeling coy) and will likely be on the list of nominees for awards in the months to come.  Patricia Clarkson is deliciously curse-at-the-screen loathsome as mother Adora, a thick-skinned matriach southern belle in demeanour and a wholly manipulative selfish hag in behaviour. Even with such veteran talent around her, Australian actor Eliza Scanlen as the young and possibly impressionable Amma is not to be overlooked and manages to deliver on what turns out to be a more demanding role than initially expected. In the final episode, dripping with metaphors, we see her dressed as Persephone at the dinner table and it would be interesting to see what she could do with an actual Shakespearian stage role.

The women of the town are like a cross between aging, petulant cheerleaders and a coven of willful duplicity – and there’s some truth that with the level of seething vitriol and damage done,  Sharp Objects sometimes feels like Hereditary minus the overt supernatural elements.  There’s certainly something to be said for a series that makes women its emotional core. But while the casting offers the townswomen of Windgap empowerment against each other, the men of Sharp Objects are largely portrayed as flawed and weak – there for attempts to fumble, fix and fuck or be left in the dust. Christopher Messina’s Richard yearns to understand and heal Camille but she doesn’t want his pity or help. Matt Craven’s sheriff Bill Vickery is also there as a foil, the weathered law enforcer whose aim is often merely to keep things from derailing too badly. Meanwhile Henry Czerny’s apparently brow-beaten and possibly-cuckolded husband to Andora, Alan Crellin, quietly seethes in the background, promising to be more relevant to the story at some point.

There’s every chance Sharp Objects will get some of those pointed award nominations but it’s the right decision to have this as one self-contained mini-series. The (literally) final few moments – which extend through the closing credits – twist the knife and wrong-foot the audience but suggest any continuation would be unlikely to play out well over more episodes.

Windgap and its women are intriguing places to visit, but you wouldn’t want to live there or outstay the welcome… 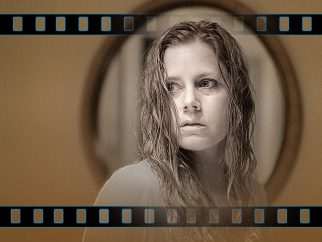 Who: Time and Relative Dimensions on Sundays…