Emotionally, mentally and physically scarred mercenary Wade Wilson / Deadpool (Ryan Reynolds) has never met an opportunity he can’t screw up, so even as he considers potential parenthood, his days of domestic bliss with Vanessa (Morena Baccarin) would seem to be limited.  Sent on a revenge of Deathwishian proportions, will Wade’s rampage be tempered with an invitation to be a trainee member of the X-Men?

But as events spiral, pirouette and tumble out of control, Deadpool finds himself shot, incarcerated, butchered and generally insulted, he will also find himself on a collision course that will need some back-up. Will he and his new ‘X-Force’ recruits be enough to take down time-traveller Cable (John Brolin) and his arsenal of weapons?

But there will be fun. A soupcon of pure luck. And blood, sweat and tears.  And possibly other fluids.

The first Deadpool, released in 2016, was almost the dictionary definition of a guilty-pleasure, a film of which no-one really expected much: essentially a mixture of vanity  project and love letter aimed at two slices of the public – the comic-reading contingent that would get the references and the casual viewer who simply liked R-rated comedies.  The finished film played deftly to those demographics but it put it also put its heart (and other parts of its anatomy) into the mix. The bar might have been set low and covered with beer-stains, but it pranced, twirled and threw itself well above expectations, freed from the usual baggage. It was crude, vulgar but also smart and sassy – not an easy mix to pull-off (stop sniggering at the back!).

Less of a love-letter to the X-Men, more a clickbait sexting marathon of cosmic proportions, Deadpool 2 fully embraces the baggage of the character and the wider Marvel Universe from entirely the opposite angle than its distant kissing cousin, Avengers: Infinity War. Years ago, the Watchmen comic played with the expectations and format of comics to produce something dark and memorable on a visual level and though it is in an entirely different tone and medium, Deadpool 2 attempts a similar task: playing with the audience’s knowledge of the genre and embracing it, turning limitations into limitless possibilities. Allowed to break the fourth wall, the character can  make welcome comments about the state of cinema to date, with even Josh Brolin’s concurrent role as Thanos and Reynolds role as Green Lantern getting spot-checked as things proceed.

Reynolds is in his element and though there’s a danger the actor could become a walking caricature of himself, a meme for all seasons, he embraces all aspects of the film with the gusto needed to make it work and there should be at least an honourary Oscar for the sheer load of promotional work he’s undertaken to sell the experience. He knows you know what to expect and knows how to deliver it.  Brolin was fine in Infinity War, but smothered under performance-capture CGI it had to be limiting. There’s still prosthetics and CGI here, but Brolin is physically ‘there’ and interacting, his Cable is given more room to chew the scenery like a proverbial stogie and be recognisably human. As with Deadpool himself, it’s a decent transition from the character on the page to the performance on the screen with all the touchstones firmly touched (stop it!)

The plot, what there is, is admittedly flimsy – essentially Wade / Deadpool being taught the value of responsibility when caught up in a time-displaced vendetta against a petulant but hardly evil adolescent. The initial trigger for Deadpool‘s rampage falls into the infamous ‘fridging’ template of using a supporting character (usually a woman) only to give the hero something to avenge, but this is a film that  admits to actively tweaks the tropes. For a story that is basically an unapologetic backdrop for riffs, parodies and super-powered snark, the anarchic tale still manages to deliver a few well-timed ‘feels’ (oh, behave!) worthy of any revenge thriller. If anything, the film’s trouble is that it might be less accessible to the uninitiated, the best jokes being aimed at those that know the source material and are happy to lampoon and celebrate it in equal measure.

In addition to Reynolds and Brolin, Zazie Beetz is fun as luck-magnet Domino, Rob Delaney is new fan-favourite ‘Peter’ and Terry Crews makes the most of his apperance as ‘Bedlam’. Briana Hildebrandt is back as Negasonic Teenage Warhead and Julian Dennison makes a petulant Firefist. There are plenty of cameos – some of which you may have heard about (find Matt Damon and Alan Tudyk if you can), some delightfully kept under wraps  – but everyone here is a supporting player to the titular ‘Merc with the Mouth’.

There’s so much fanboy material that even with a questionable hit/miss ratio, there’s still enough in there for ninety minutes of fun as the shtick hits the fans. Stick around for a raft of mid/end-credit extras which are arguably the funniest of their ilk to date and you’ll see they provide not only some laughs but tweaks to Marvel canon. Here it roar/raw.

Deadpool 2 is released on to DVD from 21st August… 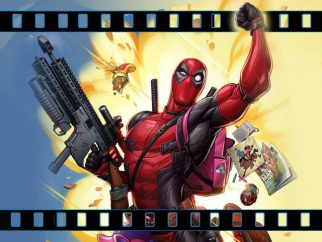