Denzel Washington answers the McCall for another round of Equalising in his first sequel...

Returning from Turkey where he has managed to rescue a young girl from the father who has abducted her, Robert McCall (Denzel Washington) is looking forward to taking it easy. He can’t help himself from becoming involved in neighbourhood problems, but his solutions are more to do with finding ways to help people work together, incentivising people to work with their better angels. His day-job as an UBER driver allows him to meet all sorts of people – and different incentives are applied in each case. A visit from his old friend and CIA boss Susan (Melissa Leo) allows him to get some help for one customer who is trying to uncover an old family portrait, but when Susan is killed on another investigation, McCall feels drawn in to find out who and what caused her brutal death.

But can one man, even one with McCall’s particular set of skills, make a difference in both the predatory nature of international espionage and street-corner turf wars?

Anyone speculating that the sequel to 2014’s The Equalizer big-screen outing might be not so much a turkey as a lesser-spotted type of bird of prey, certainly had enough circumstantial ammunition with which to work. It has, after all, been four years since that release and it’s usually a case that a sequel gets the greenlight pretty quickly if it’s going to at all. Equally, a large gap between territorial (ie: US/UK) cinema releases of the same film used to be the norm back in the 1980s but over the years the window has all but shut with many a film coming out on the same day or within a week or so of each other. Nowadays any long delay or gaping chasm in the schedules is often seen as a sign of abating confidence.  The Equalizer 2 was released in the US back in June but has taken another two months to reach the UK shores. The catch is, there’s no discernable reason why – The Equalizer 2 might not be on the fast-track for any Oscar recognition, but it’s a perfectly decent film.

In the same way that the cinematic Mission Impossible has largely shed the mystique of its source material in favour of more intense set-pieces, the 2014 Equalizer film hit mainstream criteria but also lost much of the charm of the series that inspired it. The fondly-remembered tv show with the classic Stewart Copeland theme music featured British veteran actor Edward Woodward as a gentlemanly ex-spy and operative Robert McCall who had become disillusioned with his previous career and now lived a reasonably quiet life in a New York suburb. To keep his hand in he would take up the causes of the underdog and the downtrodden, bringing his particular set of skills to making sure local justice was served when the police couldn’t or wouldn’t help. There were punch-ups, some gun-fights and even the occasional car-chase but it was not, as many of its 1980s peers would be, an all-out ‘action’ series, relying more on Woodward giving McCall the ability to be intimidating and smart rather than brutal.

Antoine Fuqua’s 2014 version brought the brutality to the forefront. The premise of a retired and weathered agent preferring to keep a low profile and simply help his neighbours was an element of the plot, but arguably not its centre and Robert McCall was now a black ex-CIA operative (played by Oscar-winner Denzel Washington) who seemed more than willing to terminate with extreme prejudice when pushed that far… and with a perchance of timing his reactions to a carefully considered countdown – a narrative ‘tick’or ‘quirk’ that seems essential to find in a modern action hero.  Some of McColl’s friends and neighbours featured, but the main emphasis was on saving an ingenue beauty from the Russian Mob. It was an ‘in your face‘ and ‘come and have a go if you think you’re hard enough‘ venture and marketed as another entry in the school-of-hard-knocks genre.

There was a mixed critical reaction:  Fuqua had delivered another gritty entry in an often ‘R-rated’ career that had already included Training Day (with Washington), King Arthur and Olympus has Fallen, the box-office was decent and Washington acquitted himself fine bringing some weathered humanity a role that ultimately required more testosterone than outright talent. But there was also acknowledgement that – names and title aside – this didn’t feel like the same. Fuqua had moulded the original concept into something that fit his own oeuvre more obviously and that Washington might have seen the action entries that some of his highest-brow peers had been persuaded to take and decided he wanted a piece of that as well. In short, the result was fine, but bio-engineered rather than comfortably organic.

It’s worth purists noting that Washington was actually older than Woodward at the moment when they respectively took up the same role. That’s a fact that often gets lost as the grey-haired Woodward played the character as stiffer and more brittle and the actor himself suffered a heart attack during filming (sidelining him for a number of episodes) that underlined the character’s lack of youth. It’s not a case of being an equal, superior or inferior, merely a different animal. The same is true of the sequel.

The Equalizer 2, while it has no shortage of aggressive set-pieces, seems to have taken some of that critique to heart. While it stubbornly digs its feet and fists in and begins with a far-flung hand-to-hand combat set-piece that wouldn’t feel amiss for Daniel Craig in a modern James Bond movie, it thankfully heads back to New York and McCall’s everyday life before presenting a number of imperatives for McCall to face – some more personal than others. This time there’s at least the feel of his old and newer worlds colliding and a range of problems that cover neighbourhood graffiti, stolen war-time paintings, date-rape and then, suddenly, the assassination of McCall’s mentor and friend Susan Plummer (Melissa Leo). At first it feels like a tug-of-war for the soul of the film before a compromise, if not a cease-fire, is arranged. While the film treats the assassination and spy-games as its emotional and action-filled backbone (as McCall tries to find out if she was set-up by enemies or friends) it’s good to see that Fuqua and Washington show more of the suburban life McCall enjoys, making him just a little bit more a beefed-up Mr Miyagi in outlook rather than Death Wish‘s Paul Kersey. Once again, the film continues to veer back to gunfights and to-the-death confrontations as much as it can, but  it’s the intensity that a veteran such as Washington can bring to the quieter and more studied moments that make the experience better.

Despite a memorable career to date, this is surprisingly the first sequel Washington has ever made and though it doesn’t reinvent the wheel, everyone involved comes ready to work and do what it says on the tin. The story contains most of the expected elements rather than any real surprises – there’s a firm and familiar template on show – but thriller-fans will be satiated by the physical ability Washington demonstrates and the momentum Fuqua provides.

It’s not your daddy’s Equalizer but it is the division rather than the sum of its parts. 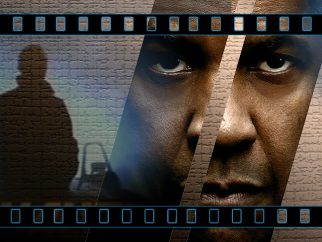