'A Nightmare on Elm Street' for the 'Stranger Things' generation, 'IT' is fun if not quite the sum of its nostalgic parts...

1986: Young Georgie Denbrough is not the first child to go missing in the township of Derry, Maine… nor will be be the last. However, in a community scarred by the loss of some of their young, it is ironically a group of loners who start to feel the malevolent presence that their parents seem to be ignoring. Georgie’s older brother Bill clings on to the hope that Georgie might still be alive, but as Bill and the members of the self-appointed ‘Losers Club’ navigate the perils of bullies and young adolescence, it becomes clear there is a fate worse than death.

If the town and the youngsters are to survive a summer of dread, then they will need to conquer their fears but the monster in the sewers, in the form of Pennywise the clown, will do everything to stop them…

Those of a certain age will remember the 1980s adaptation of Stephen King’s IT with some fondness. Despite the fashion faux-pas and budget restrictions, the mini-series largely stands up to the passage of time and a recent re-viewing reminded me of how it largely caught the spirit of the piece and retained it. A remake might not have been essential, but it was perhaps inevitable and there’s certainly fertile ground as a drama. The 2017 version fares much better than some might have predicted, but not without some problems.

Whether it is in genuine homage or merely marking off milestones, the new film mines other iconic Stephen King moments. Above and beyond the now obligatory nods to his other work that are often littered through productions, there’s a re-run of Carrie in a bloody bathroom scene and – without spoilers –  the epilogue positively screams Stand by Me in tone and execution. Both examples walk the fine line between appropriate homage and just outright appropriation.  Equally, there’s no escaping the enormous carnival shadow cast by Tim Curry’s original portrayal of Pennywise and it’s easy to see how such a pivotal piece of the jigsaw can be misjudged. Curry’s version was a comical-looking creation with a sardonic tone, made all the more effective because the more obvious flashes of pure evil were few and far between (usually accompanied by some memorably bad dental work).  Bill Skarsgård is still effective in this latest take, but  the required make-up and deadly smile all too often gets shoved aside for more conventional CGI. The effect is to turn the film and the fear-powered monster at its heart into something akin to Freddy Krueger’s younger brother, just another generic supernatural bogey-man powered by torture-devices and grand-guignol pixels that might not have been half as effective if it didn’t have the original’s legacy to lean upon.

The 2017  IT concentrates solely on the younger incarnations of the characters that King’s original book revisited later for a redemption-filled conclusion. The problem is that while the likes of Netflix‘s  Stranger Things was carefully constructed to appeal to both the old and young,  the latest version of IT is powered by nostalgia and blood, an ‘R’ rating meaning that while the cast is predominantly kids, not a single child of that age will legitimately be able to see it.

However it IS that young cast that make the film worth viewing, their ‘Losers Club’ having the same kind of specific gravity that brought audiences in the past. Almost none of the central ensemble are household names but that could quickly change. Each actor sells their role and for the most part it’s that organic comradeship that powers the production and gives it a beating heart.

Relative newcomer Sophia Lillis is a young actress to watch and performs well in a role with the confidence and looks of a young Meg Ryan, but it’s unfortunate that much of her character decides to lean towards more acute sexual abuse than the original book or mini-series. It’s one thing for a bully to throw some untrue  line about her being promiscuous, but from the very first scene it is  a comment repeated time and again needlessly and by superfluous characters, so much so that it comes dangerously close to be a defining the character rather than framing it.

Jaeden Lieberher as the grieving Bill, blaming himself for the loss of his younger sibling Georgie, is great and gives a subtle under-played performance. Jeremy Ray Taylor as portly newcomer Ben makes his character awkward and goofy without ever losing him smypathy. Chosen Jacobs’ Mike has some strong moments and Wyatt Oleff, last seen as the young Peter Quill in Guardians of the Galaxy is good as Stanley.  Perhaps most recognisable of the bunch is Finn Wolfhard but his success as the not disimilar Mike Wheeler in Stranger Things means that IT‘s Richie feels unfortunately like early on-set stereotyping.

IT is a visual film, often effectively at its best when it’s scene-setting,  character-building and going the old school route of building up tensions, playing with perceptions rather than when it goes all out and shows its adult-orientated CGI hand (an argument that the original mini-series navigated better until its closing battle with horrendously budget-limited effects). Box-office in its opening weekend has been strong,  defying a sluggish summer and pointing the way towards the second-half of the story being filmed as soon as possible (and probably underlines the wise-choice of moving this from the 1960s to the 1980s so that the next ‘modern’ half can be contemporary).

So, ultimately we have a Nightmare on Elm Street for the Stranger Things generation, a Stand by Me for the splatterhouse genre and a movie never quite being able to make up its mind on which is a priority. Despite being not quite as good as any of those elements and pushing towards a checklist of potential horror genre go-tos, IT is still a watchable, enjoyable modern horror flick with surprising heart and one that gets more right than wrong – though, ironically, it may appeal more to those old enough to remember the mini-series while supplying enough ammunition to complain that things ain’t quite what IT used to be.

(*Coulrophobia – the fear of clowns) 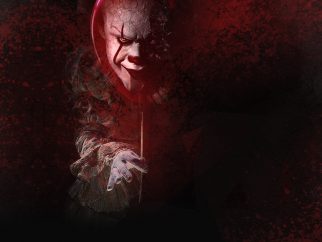 Sum of its ‘Counterpart’ – a superior twin dilemma…