Through an aquarium darkly, a superb cast brings a flooded fairy-tale all the oxygen it needs to breathe...

Eliza Esposito (Sally Hawkins) lives a lonely life – dividing her time between her apartment above an old movie theater, doughnut breaks with neighbour Giles (Richard Jenkins) and her lowly job as a cleaner at a research facility hidden deep beneath Baltimore. She’s almost reconciled to the fact that her dreams will likely remain just that.

It’s the height of the cold war and in a race to the stars, a mere-man-like humanoid has been brought from the depths of the Amazon to be studied and used. Ruthless project commander Richard Strickland (Michael Shannon) will inflict any pain he has to to get the answers his military commanders require – after all, the creature is, at best, an asset to be realised and at worst just an abomination to God.

But his plans are about to be derailed when  Eliza meets the creature and strikes up a secret, forbidden affection. Can she help him escape his new prison – and even if she can what will be the cost to Eliza and her friends?

Director/Writer Guillermo Del Toro and his films almost always have that balance – the kind of project with one foot in the light and one claw in the darkness. Like the best fairy-tales, the films are twisted and built notably for adults rather than children. While the same could be said for Tim Burton’s movies, The Shape of Water is far more sophisticated than almost any of Burton’s offerings, combining a richer palette, deeper mythology and a more nuanced set of performances.

Sally Hawkins  will surely get an Oscar nomination for what is a hugely expressive, but virtually silent performance, but one in which she bears body and soul. Her Eliza may be mute and quiet, but there are times when she positively raws. The character remains the beating heart of the story and we realise that her meek appearance cannot hide the kind of quiet defiance that powers some of the best underdog stories. The actor has rightly seen her star in ascendance in the past decade, breaking through with Happy Go Lucky and following up with projects that range from Jane Eyre to the Paddington movies and even survived working on Godzilla, a project that so blatantly wasted her talents that she barely has more lines than here).

The often under-appreciated Doug Jones has long since become the go-to actor for prosthetic-heavy roles. In an era where performance-capture and post-production CGI has become the next step in visualising a character, Jones keeps reminding us of the practical skills needed, bringing a certain tactile and hard-copy humanity to his roles. No stranger to working with Del Toro (on such productions as the Hellboy movies and Pan’s Labyrinth, to name but two) and currently a mainstay of Star Trek: Discovery, his nameless, wordless latest aquatic creation speaks to us through inflection and posture and by the time the credits roll, he’s proved as human as any other character on show.

Richard Jenkins and Octavia Spencer take roles that could easily have been less important if not played by such talented performers and written so well. Jenkins’ Giles is a lovely, under-stated but caring man, closeted away from an era that doesn’t appreciate him and ploughing through life with a careful dignity. Spencer’s more opinionated and fiery co-worker Zelda personifies the kind of  character who knows her own self and strengths but also knows how gently she has to push at the boundaries at a time when her position and skin-colour make her an easy target.  Both characters give a nobility that goes beyond basic support and it would not be a huge surprise to see them nominated in award categories as well.

Michael Shannon’s Richard Strickland is superbly creepy – a bully in form and movement and whose every scene positively wreaks of misplaced arrogance and entitlement. Shannon is an actor who is often given volatile characters to play but has a track-record of making them interesting – unafraid to show their strengths, flaws and bad choices. He’ll be seen later this month in the WACO mini-series and the cinema-released 12 Strong and he continues to build an impressive and interesting career.  Michael Stuhlbarg, David Hewlett and Nigel Bennett also provide key roles, each having their moments to shine.

Beautiful to look at – examining a paranoid, desperate Cold War theme through an aquarium darkly – The Shape of Water is the kind of story-telling we rarely get on the big screen – intelligent, caring and just the right amount of subversive. All too often a story is swamped by special-effects that overpower the story for the sake of flash-bang trailer set-pieces, not so here. Though post-production and special-effects are on used exceptionally well for the finished result, it’s the immediacy and production design that keeps it all grounded throughout, the fantastical nostalgia rarely veering too far away from its foundation. (An imagined dance-routine could have gone horribly wrong, but instead is presented with such affection and joy that it works well). Yes, the pacing is a little off – dragging slightly in the film’s third quarter as it sets up its endgame – but the climax is worth the wait…

A lovely piece of mature, smart film-making with gallons of heart and fathoms of feeling,  it’s hard not to fall under the magic of The Shape of Water‘s spell and its anthem for the outliers…  a production that homages the Creature from the Black Lagoon and classic Hollywood cinema without becoming soggy or complacent – essentially reminding us of the power of cinema with a timeless quality for the ages. 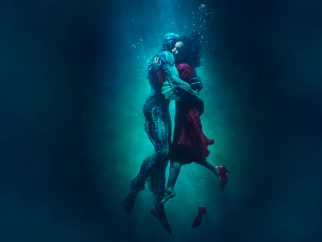