I want to believe... that the X-Files deserved better. Stepping out of the shower, 'The X-Files' rewrites its recent and longer-term history...

Agent Dana Scully (Gillian Anderson) is rushed to hospital after having a seizure and neither Fox Mulder (David Duchovny) nor Assnt. Director Skinner (Mitch Pillegi) have any idea what’s wrong. Even the doctors are mystified by the activity that appears to be going on inside her head.

When she awakens, Scully tells Mulder that she’s seen a vision of the near future, a country ravaged by an alien virus. For Mulder, their son and the world to survive, Mulder must find that missing progeny. Though he is now the skeptic of the team, Mulder heads off to find the Cigarette-Smoking Man (William B Davis)… but there are other forces at work and a bigger secret that will test all their loyalties…

For a while The X-Files greatest fault was that it was a victim of its own success – a cult network show with great ratings but with a central conceit that became an enigma wrapped in a puzzle, stuck in a maze of its own making – a series continuing solely because of the ad-revenue rather than an ability to answer any of the questions it had asked.  Its mythology became so contradictory and convoluted that whole swathes of story-line were either made redundant or retconned and climactic moments were solved with all the delicacy of a ‘Saturday morning serial’ hoping you’d forgotten specifics in the hiatus. But there was also something of a cheeky momentum – the feeling that its stars David Duchovny and Gillian Anderson were along for the ride, willing to suspend disbelief for the sake of a zingy one-liner, guaranteed employment and an increasing pay-cheque (Anderson successfully made sure she eventually got as much as her co-star). When the original show went off the air after a decade of rarely successful shake-ups and retooling, it appeared The X-Files had come to an end.

It began at a time when it was fashionable to question authority and governments, but when conspiracies were as fun and entertaining as they were righteous, the fodder for novels, tv and films. It may not involve aliens, monsters or ghosts, but the out-there truth is now that the evening news has the kind of conspiratorial narratives that would make the X-Files blush and real life seems more unlikely.

The 2016 revival was a mixed bag, a mini-series which felt like a half-hearted attempt at nostalgia – uneven and opportunistic but met with a shrug and the realisation that it was part of a trend for looking back and giving older triumphs a chance to revisit old glories (think Prison Break etc)… all in the wake of so few more-contemporary break-out hits. It would have been entirely reasonable to judge it as a last hoorah, a Hail Mary and for everyone concerned to head of into the sunset of a farewell tour.

However it was Shakespeare compared to the start of the 2018 mini-series that acts as a follow-up and which surfaced this past week. There is so much wrong with the return of The X-Files and its first new episode ‘My Struggle III‘  (a title that literally demonstrates its lack of originality by lifting the first episode title of the previous run) that it’s probably not an exaggeration to say that the only truth out there is that this a franchise that should have been abducted many many years ago instead of probing its own orifices for the kind of story elements it now offers up as so-called intrigue.

Chris Carter always had the tendency to have his characters suddenly spout soliloquies that were meant to sound like profound and deep insights into the human condition and our place in the universe… but too often came across as portentiously awkward surfer-speak. That he opens this latest batch of X-Files with the infamous ‘Cigarette Smoking Man’ lecturing the audience on his place in man’s fickle history of the past century (and its future) feels like nothing more than an affronted drunk uncle bemoaning the state of the country from the safety of his armchair, telling tall tales of small consequence and yelling for the kids to get off his lawn.  What could have been, in the hands of a clever storyteller, quite an opportune observation of the inmates taking over the cultural asylum with Fake News, alt-facts and indulgent, self-serving conspiracies, is largely squandered with lip-service lamentations and barely a lick of irony.

We last visited the X-Files as a disease ravaged the population and a UFO seemingly lit-up downtown Washington. It was as if Chris Carter was deliberately painting himself into a cosmic corner because… well,  aliens at rush-hour is surely a bit of a wake-up call to the public – the conspiracy can’t be secret any more.  So the fact that our first new view of our dynamic duo makes no immediate reference to that and has Scully lying in a hospital bed, deeply unconscious but allegedly sending morse code for ‘Find Him‘ through her the computer read-out of her hypothalamus is…. well, out there. When even Fox Mulder says ‘This is insanity‘ it means something. When the previous series climax is revealed to be ‘just a dream/vision’ that’s cheap, stupid and frankly just plain insulting.

Once again, the series-opener has to resolve and reset what has gone before but this clumsy ‘Bobby Ewing’ solution comes with lazy direction from Carter himself, compiling the disaster and damage his script has already managed. The wooden monologues continue throughout the episode with Duchovny’s bedside manner barely escaping splinters,  his plot-explaining narration during a car-chase robbing the latter of any tension. Indeed, tension is the one thing missing from the entire episode. Imagine a Bond movie where Blofeld merely talks about his nefarious plans for two hours, an episode of Law and Order where people just make phone-calls or a film where a global catastrophe is on the horizon and our hero must (drum-roll)… form an exploratory committee to raise funding. Even George Lucas must have been yelling: “Chris, you can type this shit, but you can’t say it!”

Both Anderson and Duchovny are fine performers when given decent material and have gone on to other successes since The X-Files ignited their careers, but they both seem bored senseless here. Duchovny looks (and acts) like he’d rather be anywhere else and Anderson spends most of this first episode in a hospital bed, largely required to have migraines. Anderson is an elegant and stunning actress, but a flashback to an early episode highlights just how much she’s changed physically. Supporting players like Mitch Pileggi and Annabeth Gish frown a lot, William B. Davis looks for a white cat to stroke, Chris Owens wonders where his career went and Barbra Hershey wonders where it’s going as she slums it in an ill-defined role that feels like a favour.  There’s not one decent performance on show from the entire ensemble.

Maybe the mini-series will get better in the next few weeks. Some who have seen later episodes say there’s a marked improvement. It’s hard to think it could be worse.

In the last week Gillian Anderson has also said she won’t be back if they decide to make any more X-Files. I want to believe it’ll be a moot point. 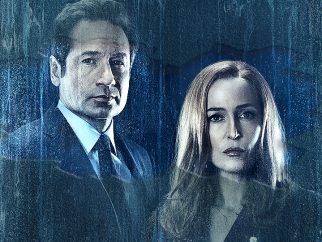