There will be blood... and there will be snarky dialogue, crimes of fashion and plenty of bullets in Ben Wheatley's anarchic dark comedy...

1980s’ Boston… and a group of ne’er-do-wells meet in a dockside warehouse to conclude a deal for arms. Some want money. Some want guns. Some just want their cut. Nobody trusts anyone else, but everyone wants the deal to go down as smoothly as possible and then to get the hell out of town.

That’s not going to happen.

It turns out that an ‘altercation’ from the night before is unexpectedly going to come back and cast a very dangerous shadow over the transaction. Now trigger-fingers are even more twitchy, revenge is on more than one felon’s mind and it’s only a matter of time before someone creates sparks in the tinderbox.  And when that spark ignites, everyone is sent running for cover. Can the remaining survivors work out a plan to get out alive?

Free Fire‘s premise and execution is a potential recipe for huge success: essentially one location, half a dozen disparate and desperate characters played by familiar faces, plenty of self-deprecating dialogue and an almost endless supply of bullets.  And to a large extent, it pulls it off with aplomb: however the result turns out to be  a quality dessert of the guilty pleasure variety rather than the ‘stand up and applaud’  banquet it could have been. 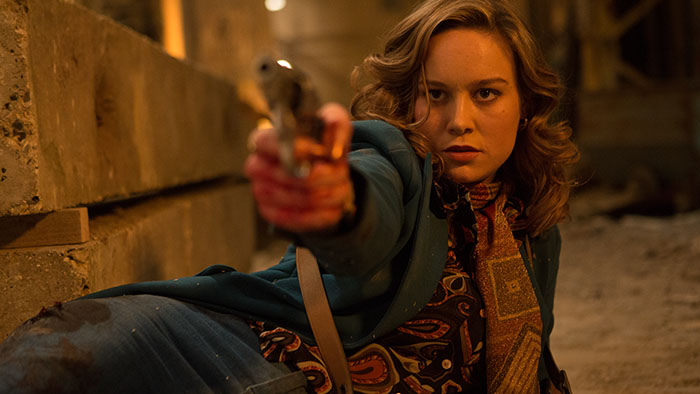 That cast includes the likes of cool facilitator Brie Larson (soon to be Ms. Marvel), the uncool arms-man Sharlto Copley, the laid-back middle-man Armie Hammer, Irish terrorists Cillian Murphy and Michael Smiley and at-odds opposing drivers/henchmen Sam Riley and Jack Reynor… all under the direction of Ben Wheatley (whose rising credits already include A Field in England, Kill List, High Rise, Sightseers and two popular episodes of Doctor Who). So you know a little of what to expect – something left field but which plays with established genres and situations.

However the claustrophobic setting and the fact that this is a movie about a stand-off, rather than an actual plot-driven story, does eventually take its toll – the film sags a little in the middle, over-extending the  anarchic premise and diluting the result to the extent that audiences may well find their commitment drifting. A good twenty minutes could have been snipped from the running time as we start to lose track of exactly who is where and just how much personal injury has been inflicted. (“Is ‘X’ dead?” – “I think so, they WERE shot… no, wait… they they are!“).  For a film where we’re initially invested in all the characters (either in the hope they survive or wishing them a grim end), there’s something of a disconnect and  that’s problematic. However the dialogue and black humour continues to be funny throughout (Larson’s ‘I bet…‘ eye-roll when Copley says he’s ‘never laid hands on a woman…‘ shows she has great comic timing). Equally it’s interesting that Murphy and Smiley’s Irish agitants (presumably IRA?) come off as the least loose-cannons in the building.

Larson and the rest of the cast perform well, given that they largely have to trade insults and bullet-casings for much of the running-time. Armie Hammer’s deal-negotiator has an eternal smoothness that belies the limited range of productions we’ve seen in him since his Lone Ranger and  Man from Uncle outings  (though, I have to admit, I mistook him for John Hamm for most of the film after failing to double-check the cast-list)

Comparisons to the likes of Reservoir Dogs are inevitable, but though many elements are the same, the tone skews a little more to comedy, albeit of the darker variety and the result of Ben Wheatley’s efforts feels more Shane Black than Quentin Tarantino if we’re talking tangible influences.

The result is a watchable, enjoyable romp – one which is likely to do better in home viewing. If revenge is best served cold, Free Fire‘s dish probably goes best with with a pizza, beer and good company. 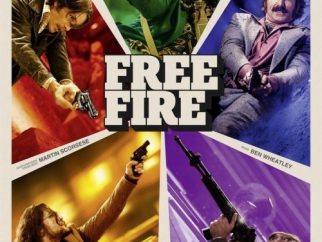