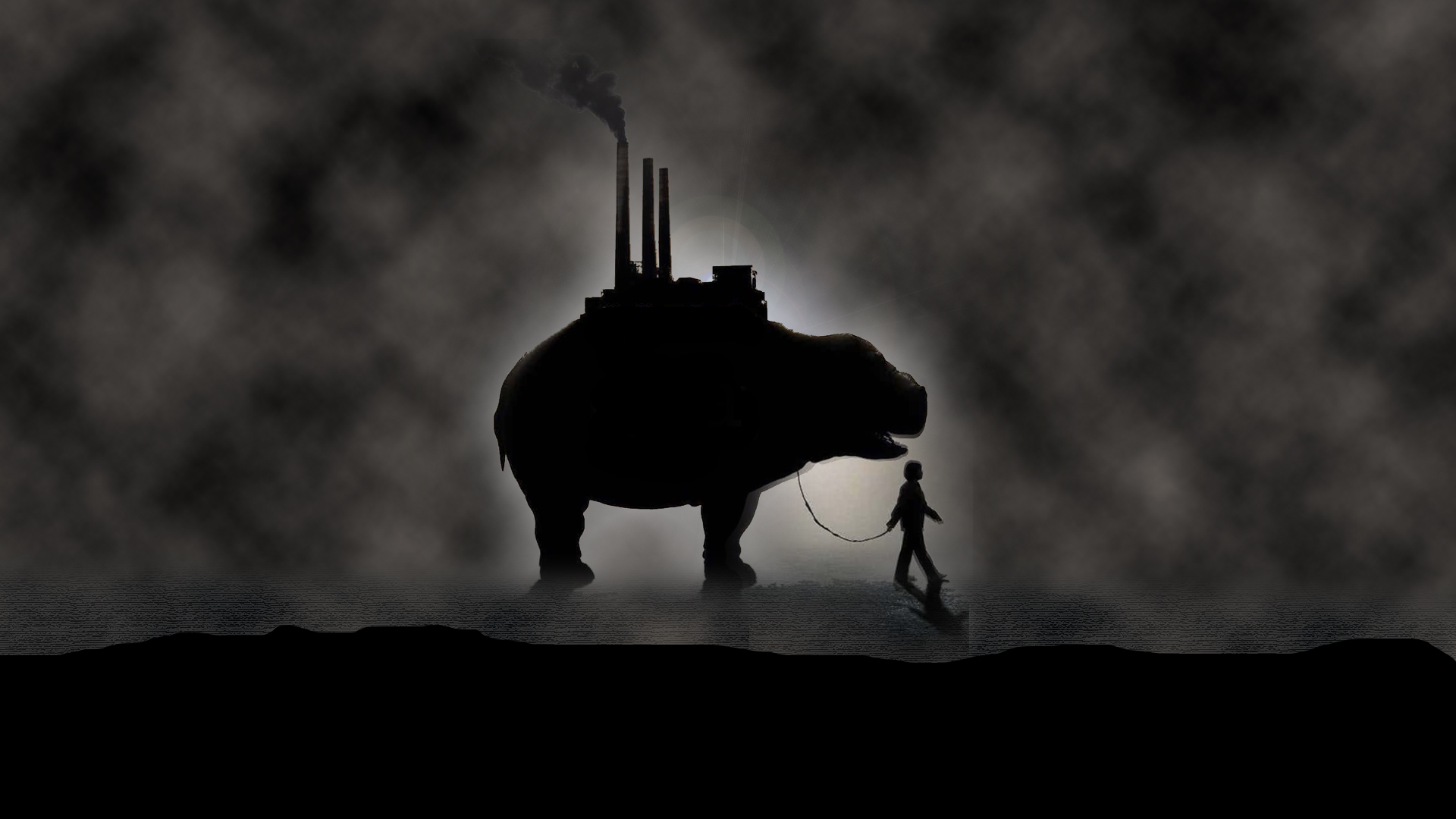 There's meat on the bones of Bong Joon Ho latest film, a fairy-tale parable of pork and profiteering...
by John Mosby 4th July 2017

Ten years ago, the Mirando Corporation – keen to escape years of bad press because of its founding father’s ruthless nature- started a program that created a genetically-superior super pig, one which had a small carbon footprint and a delicious non-waste yield. The brainchild of new CEO Lucy Mirando (Tilda Swinton), the comapny slowly perfected their creation and, wanting to change the long-term public perception, installed a decade long ‘competition’ where examples of the pig were safely placed in select communities around the world and their existence monitored and nurtured.

One of those placements is in an isolated but picturesque farm high in the Korean mountains where the young orphan Mija (An Seo Hyun) lives with her grandfather. While the grandfather dispassionately sees Okja as a pragmatic money-making  exercise, Mija sees the giant pig as a friend and it’s clear Okja feels the same way, possessing enough awareness and sensitivity to actively protect her from harm.  When Okja ‘wins’ the contest, it is decided that she will be shipped to New York, once again under the control of the Corporation.

Not wanting to lose her friend, Mija sets off in pursuit but as she attempts to catch up with the convoy, she meets the ALF, the Animal Liberation Front, who tell her that Okja’s fate may be worse than she thought and that they need her to expose the cruel truth… that Okja is one of hundreds of GM animals bred for their meat and with no real caring for their welfare.

In the recent sneak-peek at Marvel/ABC‘s Inhumans series we get a couple of seconds of Lockjaw, their teleporting bulldog-like pet (for those unfamiliar with the character mythology…hey, just go with it…). Those marveling at the visual-effects for that singular element may want to set their benchmark even higher with a whole film featuring a similarly-named and not dissimilar looking beastie, albeit it a production with a vastly different tone and budget.

Described by some as the first ‘vegetarian action movie’,  Bong Joon Ho’s Okja comes across as less a stramlined summer action outing and more as a twenty-first century ‘Babe‘ re-imagined by a Terry Gilliam or a Tim Burton ethic by way of Ken Loach… and if that sounds like a difficult if potent combination to even attempt, then that’s the mixed result. 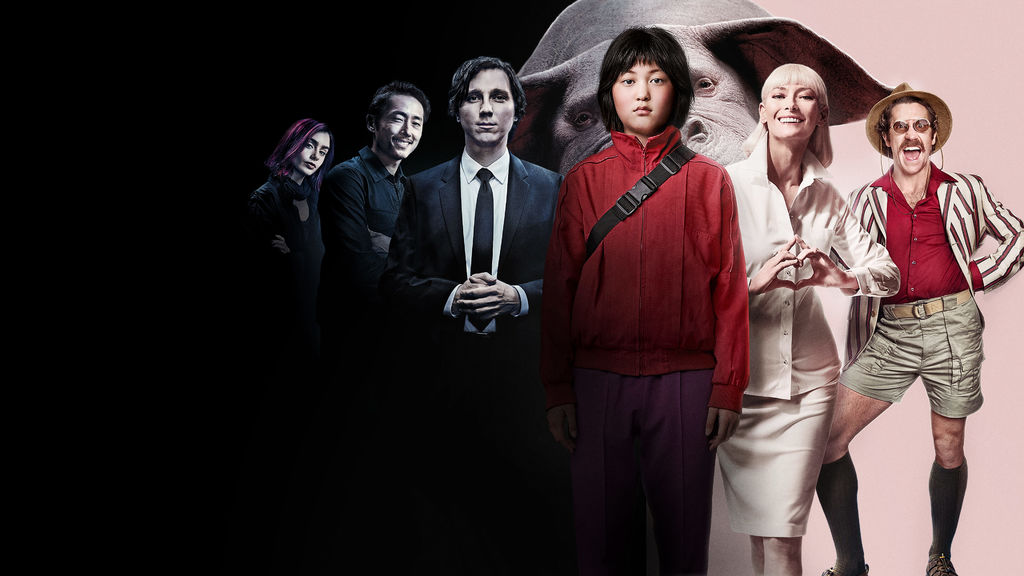 Ultimately, Okja is a bit of a mess, a scattershot endeavour with good intentions and superb ingredients but which never quite knows what it wants to be. While one applauds the sheer bavura-style of the subject-matter and story-telling that Bong Joon Ho brings to all his films, it is fair to say that though all that worked in the favour of the more structured and compartmentalised  Snowpiercer, Okja‘s story may weave too extremely for some. One one hand it’s a fantastic fairy-tale full of child-like wonder, on the other it’s a vicious satire on corporate greed complete with swearing and violence. The two intertwine and orbit around each other rather than blending into a whole and therefore it’s likely that the eclectic film – with much to recommend it –  will appeal most to existing fans of Ho’s work and audiences on the festival circuit rather than getting as much mainstream attention and traction.

Tilda Swinton enjoys the chance to deliver another ‘grotesque’ in Lucy Mirando, though it’s not quite as beautifully pitched as her almost unrecognisable role for the same director in Snowpiercer. However it’s a portrait of restraint when compared to Jake Gyllenhaal’s wacky, unhinged pseudo-anthropologist tv presenter and wildlife ‘expert’ Johnny Wilcox, a performance that never seems to find the correct fitting in the ever-twisting jigsaw of a film. Paul Dano and The Walking Dead‘s Steven Yuen play two members of ALF with different strategies with Breaking Bad‘s Giancarlo Esposito underplaying as a scheming subordinate and Harry Potter‘s Shirley Henderson more loyally towing the party line.

The visual-effects – in particular the creation of Okja herself  – are quite phenomenal on both a creative and functional level. There is absolutely no doubt in your mind while watching the film that the titular animal is real and present in all those scenes and that goes a long way to underlining the uncomfortable truths on show. It’s a creature that seems  completely viable and Bong Joon Ho and his team have perfected that balance between giving Okja a distinct, engaging personality while avoiding any attempts to ‘Disney-fy’ the finished result into something twee and ridiculous . There’s pratfall humour  amid the genuine horrors but for the lighter scenes it’s like watching the earnest antics of your pet dog… if you’re dog was actually a massive genetically-engineered hippo-size breed. For the darker scenes, such as those set in a huge industrial abattoir… well, imagine your pet in that scenario and it evokes an equally strong reaction.

Interestingly, though there’s the comedic (if genuinely-motivated) aspect to the ‘ALF’, it is not a creation solely for the film – there was an organisation of the same name and remit operating in the UK for many years and which made similar headlines for balaclava’d raids on animal-experiment laboratories. To heck with Marvel. it’s worth staying until after the credits for a pay-off to the group’s cinematic version.

Like Snowpiercer before it, the greatest plaudit one can offer about Okja is that there isn’t – nor is there likely to be – another film quite like it this year. The message may get a bit muddled and the canvas may prove too abstract, but Bong Joon Ho’s circus mirror depiction of the way we treat animals and each other is telling and tolling – simultaneously disturbing and delightful, an abbatoir of the absurd. In an era of unchallenging mediocrity and predictable bloated output, we once again have a singular vision that has something to say and a sense of real ambition.

And you may never eat a bacon sandwich again.

Okja is currently showing on Netflix 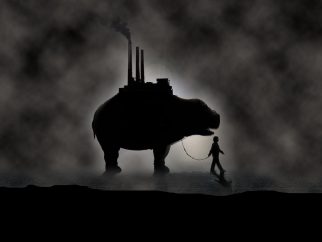