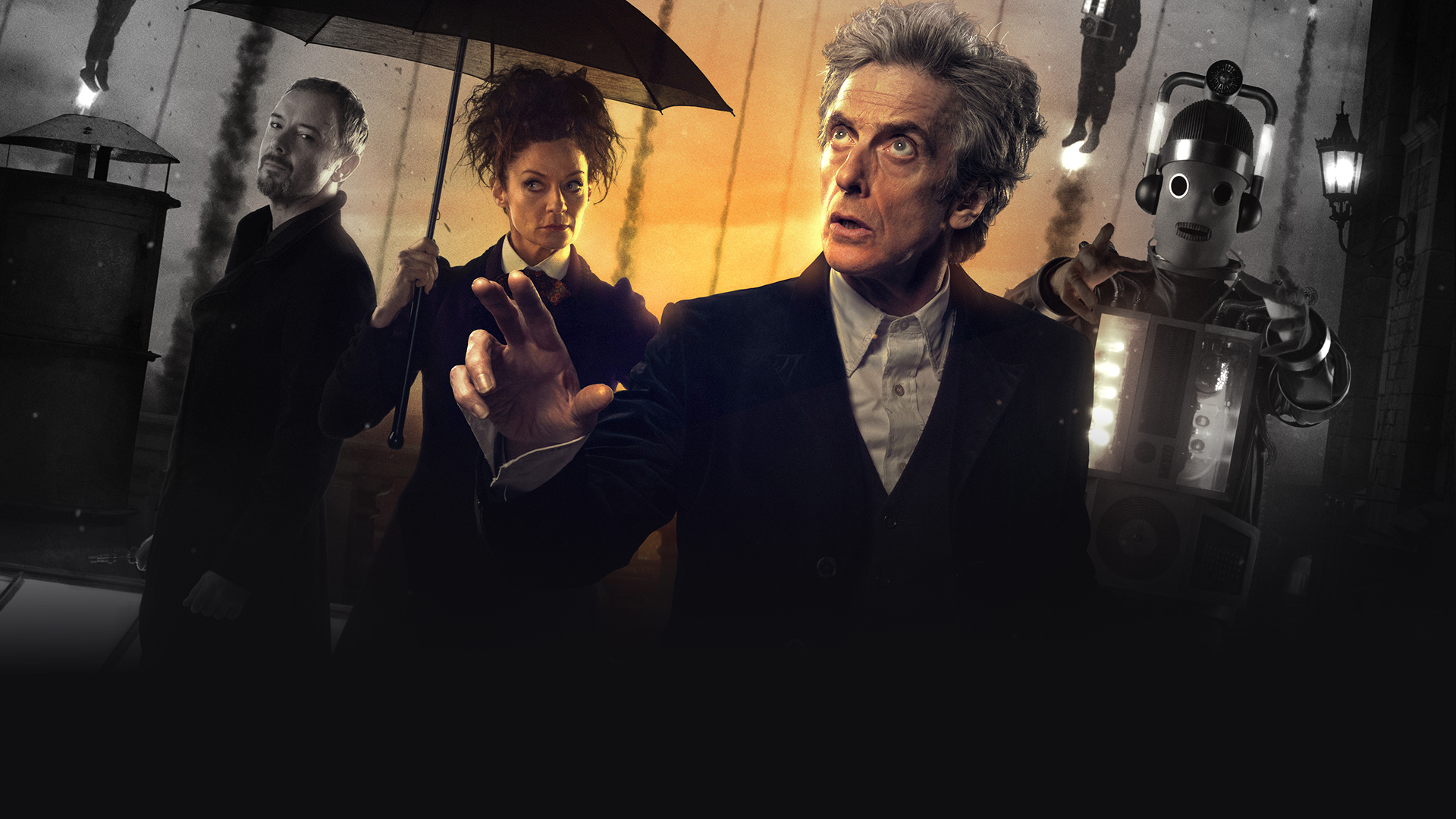 Time waits for no man... but as the end draws near, it seems our resident Time Lords are beside themselves with worry...
by John Mosby 1st July 2017

The Doctor has lost his companion, Bill, to the conversion treatment that is making the first Cybermen. He is now a prisoner of not one but two incarnations of his nemesis, the Master/Missy. All hope seems lost but some quick thinking means that the Doctor quickly ensures they all have to work together to overcome some shared immediate danger.

But as the survivors attempt to rise up through the many levels of the starship, they realise that time is literally working against them…. even as mere minutes, days and weeks pass for them, the threat below has months, years and decades to perfect their pursuit.

On a level taking the form of an old farmstead, the time has come to make a final stand and for everyone to face up to their past mistakes and current predicament. There’s a good chance that not everyone will make it out alive or unscathed, but sometimes how you die says as much about you as how you’ve lived… and the face you show to yourself is as important as the one you show to the world…

Steven Moffat promised us an epic conclusion to the current run and to be fair he’s kept his word – throwing into the cosmic pot a whole range of ingredients that make The Doctor Falls an unmissable if not completely satisfying entry into the milestones of the series. As with all modern Moffat material nowadays, there’s three truths: that previously-used concepts will be dusted off and used again, that some things won’t make a lot of sense other than being convenient to the moment…the third being that the other two really don’t really matter if you’re entertained enough.

With enough throwback references to the past to please the most-die hard fans, this is a story that foregoes much of the timey-whimey temptations that Moffat embraces so often and does a complete gear-change (which Moffat does enjoy!) and takes everything down to a more personal level – the Doctor willing to risk everything for some strangers on principle merely because it’s the right thing to do.

The Doctor Falls includes nods/homages/pilfering to other climactic episodes and arguably mashes together the Trenzalore stand-off in Time of the Doctor, the isolated Gallifreyan homestead Doctor of Heaven Sent and the Cyber-heavy finale of Capaldi’s first season Death in Heaven.  There’s a nice throwback to Curse of the Fatal Death  (and more recently Time Crash) in the way that Missy ultimately helps the Master to overcome his Tardis problems (essentially by remembering what would be needed and having it ready to hand back to her past self) though this is is in the middle of a scene where we’ve established she can’t remember what happens and if she could wouldn’t she avoid what happens next (which, I suppose is the get-out clause when there’s an inevitable revamp of the character somewhere down the line).

After the build-up of Missy’s possible conversion to the good side and the much publicised return of John Simm, those expecting the ultimate Master story may ultimately be disappointed. It was inevitable that such a collaboration would make a great season finale but given that this is also Capaldi’s series swansong, the ‘bad-guy team-up’ is quickly relegated to perfectly-delivered but largely story-superfluous snark in favour of giving Capaldi his rightful centre-stage. Yes, there’s delightful conflict between the ruthless Simm incarnation and Gomez’s slightly more empathic version – but they are a sideshow rather than the main event as advertised. While Missy makes her moral decision at the end, she never gets to follow-through on it – removed from the board by Simm’s scorpion-esque revenge. It would have been much more satisfying if she’d actually been able to contribute something significant to the endgame, even if the Doctor never knew of her assistance or she of his survival. Instead it’s ‘Rosencrantz and Guildenstern are dead, but the moment has been prepared for…‘)

Capaldi is as excellent as expected. For all the Doctor’s usual innate cleverness, a majority of the episode is spent preparing for the inevitable rather than finding a way to stop it. The sombre Capaldi wears that veil of weathere- if-resolute heroism like Armani armour and as the end draws near you don’t want him to go into that dark night this soon. He’s looking around and seeing the Masters desert him, Bill fatally compromised and everyone facing overwhelming odds. Even his brilliant mind can’t see a way out and so he simply decides the way he dies will be important… that if he can save the other inhabitants of the vast starship, if only for a while, then any sacrifice will be worth that on sheer principle. He does so in spectacular fashion, going out in a blaze of glory that’s as brutal and tragic as one can get given the time-slot.

Pearl Mackie has been given more weight and depth in one season than the likes of Clara got in three and the terrible situation that Bill was left in at the end of World Enough and Time gives the actor a galaxy of opportunities to use in her nuanced performance. The entire season is her show-reel. Thankfully, the art of television means we don’t have an hour-long outing with Mackie inside a ‘cyber-sock’ but instead get a perception filter to see how she still sees herself. The way that we switch perceptions according to scene is played out effectively and we feel her pain, so much credit to Rachel Talalay for the direction.

That Moffat eventually gives Bill a get-out clause and a happy ending of sorts will largely be divisive depending on your viewpoint. We’ve grown accustomed to the series pulling unlikely rabbits out of even more unlikely hats when it comes to saving graces and last minute reprieves… the rinse-and-wash feeling as if someone came in to a dark-and-angst-filled writers’ room and gently reminded everyone that seven year olds won’t stand for actual death and to find a way to back out the dead-end into which they’ve driven. So, yes, Bill IS saved, somewhat subverting the black / lesbian fatality index quota.  Ironically, we harken back to the first episode of this season The Pilot with something that initially feels conveniently and bizarrely abstract but on closer examination actually DOES makes some sort of sense (the tears – referenced throughout this finale acting as a homing beacon for Heather to magically reappear and ‘save’ Bill because she’s been with her in some sense all along).  It does fall into the other trope of  making a person you ‘went on a date with’ into ‘the love of your life’ – so whether their star trekking leads to happy ever after or the get-out of ‘home before tea’ we’ll see. We may or may not have seen the last of Mackie as a regular companion, but for once the companion’s tale seems truncated rather than overextended.

At the end, having surprisingly survived becausesomething, Capaldi gives us a temporarily resuscitated but angry Time Lord, actively refusing to regenerate – perhaps tired, perhaps simply feeling not worthy… but, of course, there’s a Christmas special and a new incarnation to come and we get the briefest tease at the very end with Capaldi collapsing with regenerative energies and another Doctor unexpectedly emerging amid the snow-drift (or very expected if you’re keeping up with casting spoilers online).

All in all then a powerful final hour of the season, with the actors, director Rachel Talalay and Moffat on scripting duties giving their all, albeit one that feels a little uneven and having too much to say in too short a time. We still have Christmas to come which will undoubtedly have to be optimistic and seasonal in some ways and it will be interesting to see if this current cycle of sorrow-and-redemption springboards us into a truly new era thereafter.