'Eternals' is ironically a film that might have worked better without being part of the mainstream Marvel franchise...

In the darker days of the Earth – around 7,000 years ago – a group of beings known as Eternals arrived. Their immediate mission was to hunt down the animalistic Deviants, protecting humanity from the creatures through the ages to come…but never interfering in human’s development in any seismic way – simply allowing the human race to evolve and multiply. Through different eras they’ve gently nudged humanity’s development but have strict orders to let their wars, trials and tribulations play out. They’ve seen civilisations rise and fall, seen cosmic beings create devastation with a click of their fingers… but still, they’ve kept to the shadows, their names and identities a secret or, at least, cloaked in mythology and whispered tales.

It’s been 500 years since the last Deviant was apparently killed and while awaiting a call to return to their homeworld of Olympus, the team have separated from each other, making new lives across the globe, continuing to live out their eternal lives in more down-to-Earth ways.

But when one of them, Sersi, is attacked by a Deviant creature in London, it becomes clear that their mission may not be over. When one of her fellow Eternals is killed, there are serious questions raised. Why are the Deviants back? Who will lead the Eternals now, what secrets about their own origin will they uncover… and what will be cost to themselves and humanity?

A perfectly reasonable film in the ‘epic, action’ department,  the truth is that Eternals doesn’t feel like it’s really connected to the Marvel Cinematic Universe. Yes, there’s a similar style, sense of action and urgency that we’ve seen from the MCU and references to the Avengers films and the Thanos-snap scattered around… but if you lifted these few seconds of references out of the two and a half hours of running-time, you’d be left with a substantially unaltered film that could (and might actually benefit from) being a standalone story in a separate continuity.

That’s the one, somewhat inevitable problem that both the MCU (and their original comics source material) often encounter… if you have a literal world-threatening threat then you immediately start asking where the other heroes are. While you can run most of the Eternals story as a ‘what happens in the shadows‘ counterpoint to the more obvious problems the MCU deals with, it’s rather impossible to have a world-ending apocalypse involving giant ‘robots’ and not miss the might of the Avengers flying in to give a helping hand at the climax.

The Eternals themselves are a disparate bunch, to the extent that while all the cast are fine and interestingly diverse, it sometimes feels almost like an approved modern cultural and societal checklist. Included in the mix is Thena – with a fractured psyche/Alzheimer’s-like issues, Phastos, happily in a male same-sex relationship (likely one of the reasons the film has been unfairly banned in some Middle-Eastern territories) and a deaf Eternal, Makkari, who looks to have invented sign-language (and which, according to Marvel, is encouraging people to learn the same in impressive numbers).  The tentpole names are Salma Hayek and Angelina Jolie,  though it’s interesting that their characters punctuate the framework of the plot rather than being the central characters. Hayek is Ajak, the leader of the Earth-bound cosmic beings but most of her role is told in flashback given events that happen early in the film. She’s the moral center and whose presence is missed by the team through the main thrust of the contemporary scenes. Jolie’s Thena is complex and damaged enough to be more than a cookie-cutter character and Jolie manages both the physicality and the internalised mental distress to give the Wonder Woman-esque creation something of a sharper edge. Gemma Chan as Sersi is arguably the real star, with a poise and presence that make her the equal of her more famous co-stars and with a better journey through the film. Richard Madden (Bodyguard) is Ikaris who seems like the defacto replacement for leader, though events transpire to change that. Madden plays him as initially-stoic though that sometimes seems just overtly stiff and distant. We have Lia McHugh as Sprite, who is a master of illusions but can’t shake the resentment of being stuck in an eternally young body unable to live the fuller life of her friends, Kumail Nanjiani as the wise-cracking Bollywood ‘god’ Kingo who gets some of the better punchlines, Brian Tyree Henry as the super-inventor Phastos who now only yearns for a domestic life with his husband and adopted son, Ma Dong-seok / Don Lee as the super-strong Gilgamesh and Barry Keoghan as Druig, the mind-controlling Eternal with the heaviest-Irish accent in prehistoric times. Lauren Ridloff, a former Miss Deaf America, is Makkari and she will be familiar to fans of The Walking Dead. It’s interesting to see a genuinely hearing-impaired actor playing an important role in a blockbuster and her presence is welcome.

There’s further comic-relief from the likes of Harish Patel as Kingo’s assistant and erstwhile advisor, but it falls dangerously close to bumbling stereotype. The main evolving-Deviant villain is played by IT star Bill Skarsgård but he’s hidden behind performance-capture CGI and infused with a snarl instead of A character… one that might have had a legitimate and interesting grievance as revelations unfold, but for whom audiences will likely not even remember his name by the time we’re done.

The VFX are good enough for a modern ‘summer’ blockbuster – we’ve come to expect nothing less from MCU movies which usually excel in that department. But, convincing as they are they don’t push any boundaries – the designs are well-rendered but not inspired… but that could also be as much the fault of the emotional investment needed. For a story that travels the world and millions of years in scope it’s pretty and fun but not as ‘epic’ ™ as the sell of the marketing, or, say, Endgame – largely because we had a decade and twenty+ hours to get invested in the MCU characters and hurt alongside them as loved, died and took down Thanos. Even the original Avengers movie spent several solo-outing features getting us up to speed first. Eternals gives us a tenth of such screening-time and pits us against pixel-perfect but rather generic-looking dog-like monsters and ethereal Celestials who barely venture outside visions.

However, Chloé Zhao – an Oscar-winning director – rightly understands the importance of the family dynamics at work in any project, even one with a franchise trademark and concentrates on the cracks in the facade of the Eternals as they question their mission and presence. The film’s strengths generally come from those interactions – physical and emotional. There’s some sleight at hand on the way to the climax and some effective familial angst at work. The film’s problem is that while that long-awaited climax offers spectacle it doesn’t quite offer a genuinely sense of consequence. Icarus might – FURTHER SPOILER ALERT – turn out to be the duplicitous and murderous member of the enclave and working against them, but despite killing several characters he’s ultimately allowed to drift away without real punishment to parts unknown like a dark, petulant Superman. The Celestials themselves, apparently above even cosmic law, retire to a safe dimensional distance with no guarantee that they won’t simply  eviscerate the human race tomorrow. By the time the credits roll, the planet and the human-race feel like they’re just dusting themselves off and getting on with a typical Monday. Again, it’s the law of  speedily-escalating crises and diminishing returns.

There’s a Dane Whitman sup-plot which will likely confuse those not already savvy with the comics character, a man who inherits the questionable responsibilities and powers of a knight ancestor. Played by Game of Thrones‘ Kit Harington  in what might be a wasted part were it not all a clear set-up for something else post-movie, Dane feels like he could be an early, significant part of current proceedings, only for him to quickly disappear for most of the film and then return for the closing minutes. There’s also a mid-credits scene of which he is the focus, but given that he’s seen approaching a whispering Ebony Blade (obscurely and briefly referenced in an  earlier scene), it feels more like an awkward, arbitrary  add-on. One can only hope it does pay-off in some unannounced way for a future film (Excalibur, anyone?). Given that current rumours put an unidentified voice also heard in that sequence as a rebooted Marvel screen character getting his teeth into his own reboot, some continuation seems quite likely… The other credits scene sees some of the Eternals out in space and meeting a troll named Pip (voiced by Patton Oswalt and a connection to Guardians…’ upcoming Adam Warlock for those in the know with comics history?) and Thanos’ brother Eros, played by One Directioner Harry Styles. That’s just as weird as it sounds and perhaps best to forget for now.

Ultimately, the film goes for epic and settles for being a pleasantly-widescreen diversion – neither that awful nor that memorable once the credits have rolled. We might not have that emotional investment, but there’s enough here to show that Marvel is challenging itself in how to handle Phase 4 of its MCU evolution while still clearly wanting to keep to its strengths. That balance doesn’t work to its full potential, the absence of any real Phase 3 presence doesn’t help, but while Eternals isn’t that blockbuster you’ve been waiting for, it’s also not a failure… and MCU fans still have plenty of upcoming entries to come… 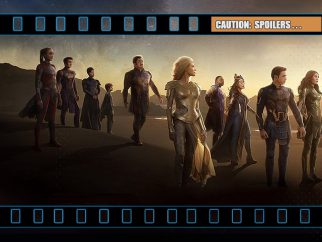