More Ballard than Bosch, but 'The Dark Hours' continues Connelly's gift of capturing the trials and tribulations of modern policing...

It’s New Year’s Eve 2020 and as the clock ticks over into a new year, Renee Ballard hopes that 2021 won’t bring any more unpleasant surprises. In the short and long term, she’s likely to be disappointed. She has a raft of cases on her docket, some more official to her than others, but the main case is locating the ‘Midnight Men’, a duo who are sexually assaulting women over holiday weekends. Their crimes and violence are growing and Ballard knows it’s only a matter of time before it could also lead to murder.

But a different fatality over the holiday, one initially linked to an accident, draws her attention and leads her to call on veteran detective Harry Bosch to dig deeper. Could a flying bullet at at a celebrational New Year’s Eve party have found a deliberate target?

As the days tick past, both Ballard and Bosch begin to wonder if both investigations are being hampered by others with connections to the police force itself. And in an era where the police are having enough problems with public relations,  who can the detectives and the public trust?

Awaiting a Michael Connelly book is something of a pleasure – Connelly being one of the masters of his crime-fiction craft for much of the last two decades – knowing the ins and outs, trials and tribulations of the police force from his time as a crime reporter… and The Dark Hours, out this week in the UK, should satiate those awaiting the scheduling of the new Bosch tv spin-off heading our way in 2022 (after a successful run on Amazon).

A solid procedural, it plays to all of Connelly’s strengths and the author wastes no time in creating several investigations to keep reader and detective busy, all set in the early days of 2021 amid a world slightly askew.  There are several cases on Ballard’s docket and Connelly carefully picks through them, giving a range of characters that end up helping and hindering  her investigations. As always ‘small-p’ internal politics play a major part and the ebb and flow of others’ agendas add intrigue. But given the current ‘interesting times’ we live in, there’s some Big P tuff in there too. Connelly makes time to address the COVID pandemic, Black Lives Matter, the January 6th insurrection and the public’s faltering confidence. While clearly sympathetic to his familiar beat and the genuine, best-case complexities of a force trying police the streets at a time when the perception of the police is less than favourable, Connelly walks the line well – noting that most of the people in uniform are genuinely doing their best (and sometimes deserve better than they receive) but equally aware that some of the criticisms of their procedures and priorities can be their own fault. He shows us good cops, bad cops and the shades in between and acknowledges that solutions will have to come from both without and within.

A minor niggle might be the fact that The Dark Hours is billed on the cover as a ‘Ballard and Bosch’ thriller.  Yes, both characters are present and accounted for, but the order of their names on the cover is telling – there isn’t a single chapter where the veteran detective appears as the focus or in his own right: he’s always there in scenes as support to Ballard, arriving on site to hand over research or protectively shadow her movements just in case and ultimately long-term fans of Bosch specifically might feel just a little short-changed, though it’s always good to catch up with him in any regard. Ballard, herself, is an interesting character but while Bosch might have his ‘maverick’ moments that irk his bosses and colleagues, there was almost always a calculating feel for procedure and accountability. He made mistakes and broke some rules, but his plans were usually considered and borne from experience. Intuitive as she may be, Ballard’s age-difference is highlighted by the moments of sheer recklessness – for herself and sometimes others. It’s a clear and deliberate distinction between the characters, but it does run the risk of occasionally alienating us from Ballard. We can like her but still despair at her actions and the fallout they are destined to bring.  Even Connelly acknowledges the differences in the latter third of the novel, with Ballard a little, realising that her climactic plans to catch the ‘Midnight Men’ are not only half-thought through but could cost lives – maybe her own.

The very end of the novel leaves several avenues open in going forward with Ballard. She’s bruised and battered, both personally and professionally and while it seems clear which avenue Connelly might be considering it’s impossible to discount any decision as you turn the last page. The very final chapter almost feels like a hasty coda or bait-and-switch to keep all those options open. But I may not be the only fan who wonders whether Harry Bosch’s future is on the screen (in that spin-off to the acclaimed Amazon Studios adaptation with which Connelly is closely connected ) and the literary emphasis clearly moving towards Renee, perhaps gently signaling the gradual closing era of a generational hand-over to Ballard in the tomes to come.

Whatever Connelly, Renee and Harry choose, their stories seem thankfully far from over… 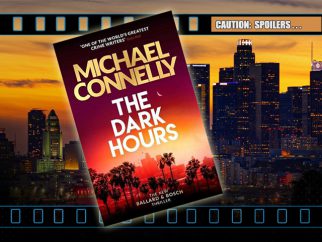 Morbius: Spider-man spin-off gets its teeth into trailer…