The chills have I's... as this week's 'Evil' turns its attention to the IRS and matters of faith, finance and the infernal...

The IRS approaches the church when a denomination of the Church of Satan applies for tax-free status under religious remits. The massive and powerful institution that is the IRS figures that a team working with another massive and powerful institution, the Catholic Church, might be in a great position to assess whether the UNholy denomination is the real thing or just a money-making exercise.

Nothing the inherent irony, David, Kristen and Ben agree and are not particularly impressed by the ‘devout’ leader they find.

But elsewhere, Sheryl and Leland’s power-play shifts and the imminent exorcism of Leland has a startling effect on someone else… but will it be too late to undo recent events?

There’s a great deal of fun in the central premise of the Catholic Church being involved in complaining that a branch of the Satanic Church is wanting to get undue tax breaks – an irony that even Ben can’t help voicing directly, along with the audience. All holy or unholy tax-dodging aside, it’s interesting to find out what the actual requirements are to receive tax-exempt status and how easily those can be and likely are manipulated by such institutions. Yes – in this case – the Satanic claim might be one easily foiled (the entrepreneur in question is a shady pretty-boy simply in it for the money and t-shirt sales, much to Leland’s actual disgust), but it does raise interesting points about infernal fiscal matters.

Humour aside, there’s dark developments for everyone this week.

For all that we thought Kristen might be tempted into straying from her marriage with David, it turns out that her ‘fling’ is a particularly rushed and one-off type of car-coitus with that opportunistic con-man being investigated for the said Satanic Church tax scam. It’s uncomfortable viewing, not remotely sexy and outright seedy and disappointing to seek Kristen sink so low and may have made most of the viewership go “Huh? Ewwwww…” When she’s later caught out by her mother trying to dispose of the ‘evidence’ it’s also a cringe-worthy walk of shame with wider complications given Sheryl’s own behaviour.

The exorcism-by-proxy factor, with Leland eventually faking the final round after some ‘real’ reactions earlier and Kristen genuinely writhing in agony in the bathroom next door, seems to cure Kristen of her ills (indicating it was some sort of demonic influence that was affecting her recently) even if she’s something of a non-believer, but is it too late to save her marriage? There’s every indication that Andy has already left for the airport and Kristen’s missed her opportunity to make amends, but it turns out he got her hurried voice-mail and didn’t leave. Awwwww. Awwwww not. The suggested Tibetan cleansing ritual (writing wrongs on a paper and then burning them) seems like a good idea to draw a line under recent problems as Andy departs to wrap up their business in Colorado, though one suspects those embers aren’t going to fully do away with the truth or consequences.

(It’s also interesting that the exorcism did start to have an effect on its intended psyche – Leland- he’s clearly a man who believes in the existence God, he just prefers the opposition – so the show is essentially playing off both Kristen and Leland against each other on a quite primal level… their faiths in the demonic and the no-higher-power, respectively, with each being challenged by surprising consequences…)

Sheryl (Christine Lahti) continues to be a complex character and though we know she’s edged way over into the dark side it’s hard to see if she’s in the thrall of the demonic or whether she’s higher up the management ladder than we might have suspected . Last week she was played very much as the victim, this week she seems superior to Leland and rather too handy with a drill regarding some of the people with whom she mingles for profit.

Again, there are a lot of those plot-plates being spun here and the stories involving Lexi’s appendage and Ben’s twin dilemma are not even referenced this week despite their seeming urgency last time, perhaps an indication that the show is diluting its attention in search of cool visuals and metaphors that it then puts to the side. There seems little chance all its tapestry will be tied together any time soon (and a third run already has the green-light) but it would be nice to think there’s a tightening of the game-plan beyond the immediate satire and insight, great though those may be. 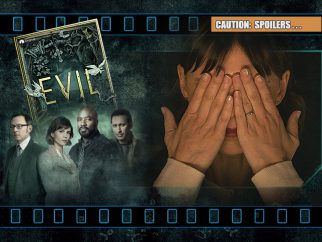 Johansson & Disney finish their Endgame and Infinity War of words…