Surviving is what out 'heroes' do best, but sometimes 'neccessity' is a matter of where you're standing...

Negan, acting pragmatically in his own sense of survival,  has left Maggie for dead, but cold and ruthless strategies are not only his domain and it’s not long before some of his fellow survivors are feeling conflicted about the self-serving choices they are also being asked to make.

Meanwhile Eugene is feeling more and more isolated and fears he will break under questioning, especially when the people across the table from him are wielding pens rather than swords…

If the temperature in last week’s The Walking Dead was cold, it’s positively frigid for Acheron: Part Two.  The opening moments take place seconds after the cliffhanger of last week’s entry and with Maggie falling from the train in to the waiting arms of zombies below. Let’s be clear: as shown, there is absolutely no way she can survive as the horde piles in and seemingly buries her under their flailing limbs and teeth. Let’s also be clear that the show isn’t about to kill off a character that has only just returned to the fold and so there’s a suspension of disbelief needed for her ‘with a bound she was free’ solution and her reappearance a third of the way into the episode with no real explanation other than she fought her way out.  It does, of course, leave the gaping chasm between her and Negan even wider as they assess where they go from here.

There’s a combination of steely, cold pragmatism and outright hypocrisy in Maggie’s stance as things develop. After making sure everyone knows that Negan made a conscious choice to leave her behind and making them turn on him, he rightly notes that mere minutes before his fateful decision, Maggie had made no secret of the fact she intended to kill him when he was no longer useful… and points out he had no logical incentive to save her if he wanted to live. (Cold, but true). A short time later, Maggie instructs the group to not save the pleading Gage (Jackson Pace as the n’er-do-well with a track record of bad and weak decisions, including stealing some supplies last week -though even regular viewers would have to cast their mind back to remember his list of adolescent tribulations) as zombies encroach on his position in the preceding carriage… Her reasoning is because it would take too long, waste their resources and put their own lives at peril. There’s a tangible uneasy shift in the group as they’re forced to weigh Maggie’s reasoning with her indignation over Negan’s own words against her minutes before… and suddenly the moral ground for everyone in the carriage is far less firm.  Seth Gilliam’s Gabriel has become tougher in recent seasons but his siding with Maggie in this department makes him look more Old Testament in outlook than he’d like to admit. Both Negan and Maggie know the sharp edges of hypocrisy more than anyone and it leads to some uneasy decisions based on likelihood of survival and to the extent that Maggie actually gives Negan a gun to defend himself and the others.

One thing worth noting – even if it seems like the show going full-on nihilistic mode – is Maggie’s ‘bedtime story’ about a rather unpleasant past encounter that involved living beings having their limbs hacked off and raped…. all to ‘prove’ that there are ‘worse’ ways to go than being eaten by zombies.  Okaaaaay, then. It also seems a little like the show overtly making Maggie more like the  single-minded and emotionally-damaged Carol. The series also finds yet another for Daryl to be off on his own, exploring an adjoining tunnel with ‘Dog’ – the luckiest canine on the planet, constantly avoiding certain death like his master. There’s a really nice scene where an outside camera tracks Daryl’s progress through a bloody carriage that almost feels like an early ‘Train to Busan’ moment.

If Lauren Cohan and Jeffrey Dean Morgan are amping-up the acting, it’s the quieter and more restrained performance of  Josh McDermitt as Eugene that is arguably just as good. With Princess, Eziekiel and Yumiko all removed for ominous-sounding ‘processing’ the Commonwealth’s bureaucracy turns their cold stares and pen-pushing against Eugene in a final effort to make him break. In a heart-rendering speech he manages to cloak some hidden secrets away under the guise of his own true inadequacies and feelings… and for all that Eugene does not reveal the secrets of Hill-Top and the other survivors, he exposes himself in such a raw way that it’s almost painful to watch. Josh McDermitt has consistently surprised throughout his run on the show, often being the brunt of the joke as the man with a torrent of words but clumsy in every other department… yet deceptively up to the hardest challenge when expected to survive for the sake of others (His time ‘defecting’ to Negan’s group several seasons ago, after all, being what amounted to pre-organised, deep-cover spying, though we didn’t know that until later).  Yumiko (Eleanor Matsuura) also has a strong moment when she uses her excellent lawyer skills to intimidate her captors. The only thing that doesn’t add up in this story-strand is the group deciding to not escape and remain in ‘captivity’, saying that no-one will even have noticed their attempt at escape. Given the inference that they took out/disabled two of the security-guards in that attempt and took their uniforms, that seems askew?

The show seems to be getting darker in its final run, still with moments of brevity to break the tension and all well executed, but as of this moment, even with the debut of the word ‘Commonwealth’ into the survivors’ lexicon, it’s not easy to see the show’s endgame – especially given its diverging path from the sourced material. 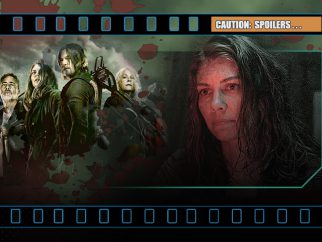