Selfless or Self-Survival: There's possibly fatal distrust in the ranks of The Walking Dead...

With crops failing, the need to get better supplies and security is becoming more urgent than anyone wants to openly admit and several initiatives are needed just to stop from going hungry. A raid on a local supply bunker produces some resources but not enough – and puts too many of the team in the line of fire.

Maggie takes a team into the subways in search of a better pay-off but her ruthless push forward is questioned by Negan who says her lack of consideration for other factors – and her hatred for him – is clouding her judgement. He knows she wants him dead and Maggie, when challenged, freely admits that wants Negan’s days numbered.

But in a world of so many imminent dangers from without and within, where there’s distrust on all sides, who can you rely on to have your back when the moment matters?

The new (and final) season of The Walking Dead returns nearly two full months ahead of its usual October/November debut but just long enough for there to be a greater need of a ‘Previously on…‘ than the intro actually provides. Unless you’ve been playing catch-up, there’s a solid chance you’ll remember where some of the main characters are, but not always the whys and hows and it’s one of those occasions where a replay of the Season Ten finale might have helped as a refresher.

The opening sequence – where our heroes rappel on ropes into a corpse-filled storage unit has an almost Mission Impossible feel, right down to a bead of blood replacing the compromising bead of sweat that makes everything potentially go wrong. We quickly move from tip-toeing through the chewed lips to having to fight off a surrounding horde and make split-second decision about what’s important. Carol makes some reckless decisions – what’s new – but thankfully they ultimately pay-off thanks to Daryl’s sold aim.

Another team (including Maggie, Gabriel and Negan) are working their way through the underground, half-flooded railtrack sewers generates some claustrophobic moments that play to a similar, if less-well it degree, of that earlier opening sequence. The idea of being trapped in the dark with the only partially-dead and with a limited way out is a guaranteed horror staple that generates a fight or flight scenario. The climactic moment where Maggie fails to make the necessary escape with her fellow survivors and finds herself at Negan’s mercy feels like a traditional set-up where we’ll realise that the ‘villain’ of the piece has a softer streak and is a reformed guy… but not so much. Negan lets Maggie fall and while that’s something of a shocker and a zig instead of a zag, it’s a moment that works on one level but not on another. It makes perfect sense for Negan NOT to save her – she’s basically spent most of the episode confirming that whatever Negan’s path to redemption, she hasn’t forgotten he beat her husband to death with a baseball bat and she’ll take her first opportunity to kill him in revenge when it becomes convenient… so for him to turn around and save her minutes later would be at least counter-intuitive to his own survival instinct. Like it or not, Negan’s actions make perfect logical sense. The problem is that the show isn’t about to kill Maggie so soon after Lauren Cohan’s return (the show might be ruthless in its turnover, but it’s still unlikely to play that ‘We fooled you…’ card quite so coldly. Combined with the fact that we don’t see Maggie die, it’s obvious she survives, so the only tension is the ‘how’ factor and the consequences’. The show already has a ‘damaged woman on the road to making peace with her decisions’ motif with Melissa McBride’s Carol and so making Maggie a cold killer of leaving, breathing people isn’t half as edgy as it sounds – however high the calibre of Cohan’s screen vitriol and however good Jeffrey Dean Morgan is as the conflicted but pragmatic target of her wrath.

Elsewhere, we’re edging towards more revelations about The Commonwealth, or at least the edges of the more militaristic society in which Eziekiel, Eugene, Yumiko and Princess  find themselves held captive. In previous seasons, this would largely have played out in violent fashion, but a lot of the tension here is in the lack of action, the planning, the deception, the holding out of secrets and the quiet strategies that they are holding on to as a way out. There’s internal conflict here with disagreements on how to proceed but also a fair amount of unlikely humour – especially in scenes where Princess seems to be making up stories and imaginary backstories about the habits of their captors, only for them to provide the key to possible escape.

This final season will run longer than before and be separated into two sections, meaning it could be the best part of a calendar year before this ‘mothership’ part of the expanding Walking Dead franchise plays out .There’s still a high level of quality here, but even with the end still barely glimpsed over the horizon, it feels like the show must tighten its structure, intent and endgame and the success of the bigger picture will depend on how satisfactory that story-telling is as we head to the dead-end finish line. 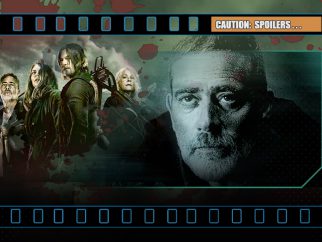