The latest Netflix chiller thriller may not quite stick the landing, but it's certainly a decent twist on a traditional formula...

Nadia is a young mother on her way from her native Germany to the US for treatment for a very specific malady, one that means certain precautions have to be taken in advance and during the flight.  She is travelling with her son, Elias, who knows of his mother’s ill-health if not the severity or its origins. They are devoted to each other’s health.

When the plane is hijacked in what is clearly a well-planned  assault, it would seem Nadia’s dreams of quietly managing her condition might now be out of reach. But the ruthless hijackers haven’t accounted for a mother’s extraordinary determination to save her son.

And Nadia is no ordinary passenger…

Blood Red Sky is one of those films that seems to both defy and embrace expectations depending on the moment – some aspects being far, far better than you might expect with other elements falling firmly into formula… and it’s easy to see where worthy praise and fair criticism might both find some justification. With better marks for potential and intent than all-encompassing result, it might well have suffered from turbulence if its release had been a cinematic one, but with its debut to a home audience on Netflix (and its subsequent popularity making it a solid top ten experience for the platform) it’s something of a guilty pleasure.

Of course, the narrative problem for films like Blood Red Sky face is how long to keep audiences waiting for a reveal that would be hugely effective if presented completely cold but is already one most likely known to the audience through the very marketing that got you watching it in the first place. We know before the first frame that Nadia isn’t actually facing a normal illness or a chemo-based treatment that might explain her baldness and aversion to crowded environments, so we are counting the minutes until she cuts loose with the more bloody explanation. There’s a sense of genuine tension if not much momentum, until the opposite becomes true. A fairly slow start, eventually gives way to the kind of frenetic fanged-chaos and carnage that is one part generic Liam Neeson-esque thriller and one part Thirty Days of Night. Initially you might think this is all service to someone eventually muttering “Can someone get these motherfucking stakes off this motherfucking plane..?” a la Samuel L Jackson. But though there are some disbelief-suspending moments and scenery-chewing gnashing of teeth that don’t always fit and threaten to bring things crashing down, a large amount of the build-up is played completely straight.

Blood Red Sky takes its… *spoilers*… vampires seriously until it doesn’t. It has more lineage with Nosferatu and Near Dark than Lost Boys or  – god help us, Twilight – and makes it personal, examining the idea of legacy, infection, the imperatives of instinct and survival and dispensing with the more abstract ‘can’t be seen in a reflection‘ or powers of the cross motifs. Then it segues into generic, if well-shot, bat-and-mouse activity and the primal, claustrophobic nature becomes a conveyer-belt of grand-guignol set-pieces.

Peri Baumeister’s portrayal of Nadia is the key here on both an emotional and physical level: beginning as wholly sympathetic – a woman clearly at the mercy of some malady and appearing to be worryingly fragile… but one who becomes inherently more dangerous as the minutes tick by and the stakes (no pun intended) get higher. It’s the physical, almost graceful-in-its-ferocity performance and heartfelt premise that provides the grounding of a story taking place mostly in the air and it’s that connection and character-study that makes you realise this might be something you can get your teeth into. Baumeister gives us a person desperately holding on to hope and her humanity and having a possible salvation in her sights… but then sees it slipping away as the animal inside her becomes the better chance of survival, but also the possibility of being just as big a danger. Unfortunately, while the slow devolution of her being holds the attention well, it’s the devolving of the larger script’s uniqueness into something more generic that scuppers some of the possibilities.

The prosthetic effects are good, especially when called to show the more subtle and gradual de-humanising of Nadia (rather than the quicker transformation of others who become infected later).  A moody backstory explaining Nadia’s original exposure is not without interest, but its inclusion in moments of further flashback, often slows the main plot. But familiarity breeds a little contempt and those on the plane who also become infected/turned get exponentially less-interesting and more 2D as things go on. Having so many creatures towards the end of proceedings, does hamper the story and choreography of what is happening and where – at one point, some vampires holding back at the edge of the screen, barely in shot seem more like accidental appearances of  film-crew rather than screen-fillers with an illogical reticence to attack. (The ‘pack’ aspect here apparent, not being addressed as much as it could have been).

Written and directed by Peter Thorwarth (who also wrote 2008’s The Wave, a solid retelling of an all-too-true classroom experiment on racism) has a firm hand here, but there are some deeper aspects that intrigue but don’t quite deliver despite early promise. The hijackers have obviously put a lot of thought and planning into their hijack and escape – in a timely move, laying down a faux paper-trail and manipulation of circumstantial communications that would point the finger at Muslim extremists is chillingly plausible and the film’s portrayal of the completely innocent Muslims onboard is well-handled – but their plans thereafter seem somewhat vague. Halfway in and the blueprint is out the window as close-quarter combat becomes the mainstay. One presumes that the film is heading in a traditional ‘how does everyone get out of this?‘ scenario where our wild-card hero must save almost everyone (with some obligatory deaths along the way) – essentially Die Hard and numerous other in-flight variations. But there’s a moment, about two-third of the way through, when it’s clear that said passengers are pretty much window-seat-dressing and collateral damage appetisers. Nadia’s determination is not the lives of her fellow flyers, nor even herself, it’s to hold on just long enough to save her son. Equally, knowing a little of her true nature, he still wants to save his mother. You realise, there’s a good chance this is not going to end well.

It’s worth noting the international aspects of the production and casting. Though Dominic Purcell (Prison Break, Legends of Tomorrow) heads up the bad guys (for a while) and Graham McTavish (Outlander, Preacher) is on the ground trying to make sense of events (mostly told in flashback), you’ll likely catch the dubbing of some of the characters in the predominantly German cast. The language-barrier and the dubbing is no hinderance and one can see this being a template for more international productions

Ultimately flawed but largely enjoyable, Blood Red Sky feels like a high-flying idea that can’t quite stick the landing.  It’s trying to simultaneously satisfy several markets – the more slow, atmospheric and cerebral aspects of a typically European production eventually giving up the ghost to the unapologetic fast-paced and decently-executed, gory action-fest American audiences may expect  – but, as a whole package, that tonal shift feels like a commercially-led pivot and suggests a missed opportunity, however well-executed both aspects may be in and of themselves.

However as a diverting if gory horror with some nice ideas, it’s certainly worth the ticket to ride. 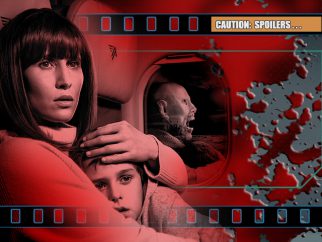