Scroobius' Dubious Do takes centre-stage as New York is the target for powerful debris technology...

After a high-pitched noise, a transit bus vanishes from a New Jersey Street and travels, instantaneously to Boston, where its passengers don’t survive the experience. Beneventi and Jones arrive on the destination site to find that the one man who seemed to be alive after the journey has been killed by a bullet and a sample taken from his body. It’s presumed someone is testing debris tec to see the results.

But when the investigation leads to Manhattan and a similar sound is heard, the implications are huge. If someone opens an even bigger wormhole in the centre of the city, the damage could be on a scale that would dwarf 9/11. The race is on to prevent an unprecedented disaster. But how are Influx managing the event – and why?  Jones must put aside her growing distrust in those around her and Bryan must try to pinpoint a solution before time runs out… neither of which will be easy as the pressure increases…

So far, many of the events in NBC‘s Debris have been confined to smaller towns, the kind of places where a perimeter can be set up and the government can point to chemical leaks and weather balloons and largely keep the flow of real information to the minimum. But this week’s tips into potentially more public territory – having the events happening in the middle of New York and with the stakes being several city blocks and an event that might make 9/11 look like a walk in Central Park.

This week’s episode serves two purposes. The first is pretty much one long countdown chase-sequence as our team races to find out what exactly happened to the bus that apparently got instantly worm-holed across several hundred miles and the fact that a larger version of the event seems to be on the cards. There’s less scientific technobabble and more ‘quick, get to that place to defuse the bomb before it’s too late!‘ imperative.

Both Bryan and Finola  ponder why there’s been such an escalation by Influx, a counter-group working mainly in the shadows  – and guessing that it’s perhaps a radical demonstration for buyers of the black-market tec.  But that answer isn’t wholly convincing on a narrative level. The destruction wrought would not only be physically large-scale, but it would alert the world to the bizarre phenomena and possibly the alien debris and that makes no real sense. If Influx were just black-marketeers, such an event might work as much against them as anything… the wider world would be alerted, other countries might react and the instability might be more chaotic than profitable. The group would instantly be top of the ‘Most Wanted’ list. It would make far more sense to stay in smaller or less populated areas for all demo-purposes. They clearly don’t seem to care about casualties, but it does lend credence to the idea that Influx might not be quite as one-note as they are being portrayed, or – at least – that their mission is different. They certainly seem more able to use the tec they have at their disposal more confidently.  There’s also  proof they consider their calling so important that they’ll die for the cause, but there’s been whispers of their ‘this tech is for everybody‘ stance… and given some of the questionable alliances within the ‘good-guys’ camp, it wouldn’t be a huge surprise to find the tables turned at some point and that the competing scavengers don’t have that much moral light between them. (It’s always good to have an excuse to type the words ‘Scroobius Pip’ into a review and the actor is back here as Influx’s Anson Ash, especially creepy in some scenes – especially when staring at the skyscraping Chrysler Building and also the enigmatic final shot…)

The second aspect is underlining the frustrations  between Finola Jones (Riann Steele) and Bryan Beneventi (Jonathan Tucker), each being instructed by their immediate superiors not to reveal key information to the other – but each of them also picking up on the feeling of distrust and deception and certain looks that say ‘Do they know that I know?‘. We already know that Maddox (Norbert Leo Butz)  is acting in a shifty way (and we’re getting drip-feed backstory about an accident that hurt his son) and was seen experimenting with wormhole-like tec previously, but guest-star Sebastian Roché  (a well-enough known genre actor to the extent we can be assured he’ll be back) as a British agent who gets intel to Finola, quietly informs her that she shouldn’t trust their own MI6 boss, Ferris (Anjali Jay).  It all feels very much like the ‘Trust No-One‘ aspects of The X-Files and one hopes it doesn’t get quite as convoluted or inconsistent as that show did as Debris goes forward. It also needs to distinguish itself from being too Fringe-adjacent.

Earthshine is fine as an episode, but it raises more consistency questions than it answers – not quite a filler per se but certainly a ‘mythology’-type entry that fits a formula and one that may rely on future episodes to make more sense of its logic.

One minor note – the titles of the Debris episodes to date seem deliberately vague or even bizarrely irrelevant. This weeks ‘Earthshine‘ moniker makes even less sense as previous weeks ‘Solar Winds‘ and ‘In Universe‘. These too feel more like placeholder code-words than titles? 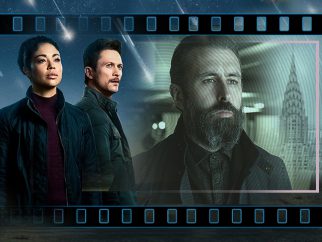