Insidious? Perfidious? After a long spell, do we now get to find out who the 'big bad' was all along?

With West View’s outer perimeter expanded and Darcy pulled into Wanda’s askew reality, the SWORD survivors plan their next move – but Monica has her own plans for getting inside to help her friends. Inside the town Wanda’s looking for some alone time and the Vision is looking for answers – but he’ll need Darcy’s help to get them, if they can only escape the circus and get home.

However it seems that certain people don’t want the truth about Wanda’s current situation to become clear and they have their own agenda to make sure it isn’t revealed before they’re ready.

As all the various forces start to converge, it looks like a case of the Mondays….and… well, snoopers are gonna snoop. Amiright?

Another chapter of WandaVision and another wave of answers and questions – with some long-expected developments bearing strange fruit, but a hit/miss ratio continuing over fan theories. No, the much-anticipated debut of Reed Richards as Monica’s astro-physics contact didn’t materialise (it turned out to be ‘Goodner’ a friend of her mother’s… but wouldn’t it have added even greater meta-value for the title if it was Reed?) and Pietro was mostly-absent (unless you hung around for that mid-end-credit tease) but so much else happened – with major reveals – that there will be few who come away disappointed.

In a format that’s reminiscent of the modern  Modern Family and it’s interactive breaking of the fourth wall (hence the episode title), we’ve likely reached the end of the sit-com conceit and there’s a real sense of the show emerging into some sort of twisted endgame. All the various pieces are moving into place, even if we’re still not sure what that will mean. We get to see Monica work up a plan to get inside West View, Darcy literally shake off her chains and finally help the Vision make some sense of his scrambled memories. In another anticipated development (but given it’s own askew delivery), we’ve likely just seen the creation of another Marvel superhero with Monica’s third journey through the ‘Hex’ seemingly igniting some of the abilities that her character had in the comics and which will likely see her become able to more overtly stand-up to threats as we draw to a close. We know that Teyonah Parris will play a part in the Captain Marvel sequel, so this power-up means it will likely be more than just a supporting appearance.

For a show so embedded in the tapestry of the MCU and its comics-counterpart, one of the ‘problems’ was always going to be the balance between the mystery and the revelations. We all like to guess and speculate (and this show has provided a wundagore mountain of such). So it’s likely many fans would have felt somewhat cheated if the solution / bad guy / reveal was only introduced in the very last episode. (That would be like having an Agatha Christie novel full of suspects and not introducing the actual killer as a character until the last paragraph). So viewers were, rightly, analysing every line, face and nuance for clues. The wildest theories that some might dismiss in normal shows, still seemed to have some merit as episodes progressed.

So it’s not entirely a surprise that Agnes appears to be the MCU‘s version of the comics’ Agatha Harkness. For the less initiated, Harkness was an elderly and very pragmatic grande dame witch – sometimes a force for good, sometimes less so – who often oversaw parts of the witch/magic communities and mythology at the edge of the comics continuity. She helped mentor Wanda Maximoff and also appeared in plenty of issues of the Fantastic Four and Avengers. Her links to stories that directly inspired some of the WandaVision elements meant she was always a legitimate contender to appear in some capacity – with the excellent Kathryn Hahn’s Agnes as the more obvious possibility – though it’s interesting that the episode suggests she’s the quirky big-bad of the piece when she was rarely portrayed as an outright villain in the comics (or, for that matter, in having a sense of anything other that acrid humour). The glimpse of a rather unholy looking book (which could be the Darkhold or the Necronomicon) looks to be important too…

Easter-eggs? Let’s be honest – is there a single scene without them? (But, hey did you spot that there’s a Phoenix acrobat with an ‘X’ logo in there too?) We have two episodes left to go with over an hour of drama to come (there were suggestions that the last three chapters would be close to an hour a piece, but this week’s was less than 35 minutes, so it’s hard to know the full time-frame). Is there time for more bait-and-switch? With many questions still to play out, the answer is most definitely –  Agnes could yet turn out to be a puppet herself, especially if the finale ties in closely to the Doctor Strange sequel (a Benedict Cumberbatch cameo almost seems likely, rather than just possible, now). And – after all – there’s still more to Pietro and we think that recurring mailman may still play a part. The mind boggles.

The sit-com aspect may be almost played-out now, but there’s still technical flourishes that go from superb production design and motifs all the way to subtle changes in the screen ratios to indicate what’s ‘real’ and what’s not. Hey, the now-traditional credit bonus scene is back too. But there’s another week until the next round of revelations, so – until then – try getting ‘Agatha All Along‘ out of your head… 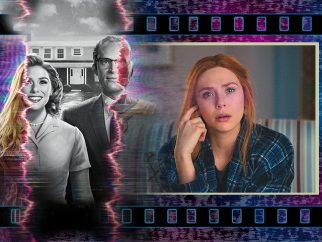