WandaVision's fourth episode breaks the fourth wall... and reality bites as we discover more about what's going on...

When Thanos snapped half the universe out of existence it seemed like a tragedy. But even the defeat of Thanos and the subsequent return of the ‘lost’ after five years has not been without its own problems.

Monica Rambeau missed the passing of her mother and her work as an agent of SWORD was put on hold. But her first mission back, to track down a missing asset, has massive impact when it’s a whole town that seems to have disappeared from collective memories.

The town is West View, it’s inhabitants seem to include Wanda Maximoff and the cyborg known as the Vision. And even more impossibly, the only signals from within West View seem to be in the form of a soap-opera starring the two Avengers.

As other experts turn up and Monica gets pulled into the West View locale, everyone wants answers – and this time things are far too serious for a laughter-track…

This is what we’ve been waiting for…

Avengers: Infinity War showed us a huge sway of characters succumbing to the ‘Thanos snap’ and turning to dust on the wind, but in the opening moments of this week’s episode we have our first proper on-screen version of their return, pieced back together on an atomic level and with only the vaguest idea that any time has past for them until they encounter others. It’s a striking moment that works well and immediately tells us that this episode of WandaVision is going to be different from its predecessors. Though, on a technical and literal level, we don’t advance the WandaVision story by more than a few seconds from the end of the last episode, this fourth (and fourth-wall-breaking) entry will probably be a welcome relief for those of us who thought the ‘trapped in a sitcom’ conceit was a great idea but wanted some momentum and some answers.

Thankfully We Interrupt this Program takes that ‘reverse-snap’ moment and runs with it, the latest 30 minute entry acting as a book-end and alternate-perspective for what we’ve seen so far. It lets us follow the returning Monica Rambeau as she steps back into the world and into her mother’s footsteps. We get confirmation that SWORD (the off-world counterpart to SHIELD) has changed some of its remit as the world recovers and that Monica  will be ‘grounded’ on Earth-based duties. So far, this feels more like the standard, if complex MCU we know and love rather than the quirky but confusing events in the series to date. How does this connect to what we have seen? It’s initially through Monica’s eyes that we see her experiences and how she was sent to investigate disappearances near the New Jersey town of… wait for it, West View!  What we now see is her disappearing into the cut-off town and then – as we glimpsed last week – suddenly being expelled after questioning her own identity.

Our other point of view is that of Kat Dennings reprising her role as Darcy Lewis from the Thor movies (with Randall Park’s FBI agent Jimmy Woo who is drafted in from the Ant-Man arm of the MCU after, in a nice subtle nod, apparently mastering the card-tricks the character so admired in Scott Lang) and who are both desperately working on strategies to explain events with a growing unease that whatever is happening is getting serious. When Darcy clocks the fact that the few transmissions they’re getting from inside the town are on older television waves, they – like us – scratch their heads at the ‘sit-com’ format that appears on their screens. They recognise Wanda and the Vision (wait, isn’t he dead?) and possibly identify some of the other townsfolk as SWORD agents, including Monica/Geraldine and though they have some answers as to the who and what, the questions of why and how remain elusive.

In short this is an episode that addresses almost all a viewer’s growing concerns that the soap-opera aspect is a gimmick and not the central pivot. We’re given a new reason to invest and assurances the journey’s far from over. Though not playing all its cards (but definitely reassuring them that we are part of the MCU) it seems likely that we won’t be thrown back entirely into the self-contained bubble next week – even as Wanda’s environment seems to move on to the 80s – but will see the two points-of-views converge.  It does seem that Wanda is either the ‘enemy’ (or, at least, antagonist) but it will be interesting to see if West View is her losing control in her grief over the Vision or whether it’s her grief being used by another force. After all, the rumour that ‘Agnes’ is a version of the comics’ Agatha Harkness (Wanda’s magical mentor) could be played out in a variety of ways.

Structure is definitely an issue with WandaVision, its strength and its weakness, though it’s the week-apart episodes that might be the obstacle. However, with Wanda, Vision, Darcy, Jimmy and Monica, connections to Captain Marvel and a whole tray of easter-egg type references, it does feel like things are genuinely blueprinted, co-ordinated and coming together and the hopes are – with some justification – it’s going to be a super smorgasbord when we’re done. 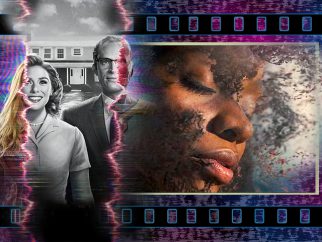