A rebel without d'accord? Trek's Discovery gets a refit but Michael finds her loyalties divided...

The Discovery receives a message from Book’s ship, though it’s his cat Grudge that appears to be the only occupant. It appears Book had found the location of a Federation ship’s ‘black box’ but his radio silence since suggests his mission to retrieve it has not gone well and will need help as soon as possible.

With Discovery refit now complete and the crew excitedly learning the huge possibilities at their literal fingertips, demands on the ship are many and Saru tells Burnham that Admiral Vance is unlikely to allow them to initiate a rescue. Burnham decides to defy orders and leave anyway and Georgiou is happy to assist her in her rebellious mission.

But getting Book out of his predicament won’t be easy and even if Georgiou and Burnham succeed, it’s clear there are going to be consequences…

Though perhaps not the most original story – will some of our heroes go against official orders and try and save an ally held on a prison-planet (spoiler, of course they will), Scavengers is still an enjoyable fast-paced entry, ably directed by series stalwart Doug Aarniokoski who manages to combine the dialogue, character-moments and kinetic visual effects into the necessary whole.

Almost halfway into the new run already and it’s interesting that the logical upgrade of the Discovery is finally happening. In its 32nd Century setting it’s been the relic, the curiosity-piece with one major asset: the spore drive, but it makes perfect sense for the ship to now be retrofitted with the best the future can offer and very quickly moving up the chain of  space-going craft to become the equivalent of the unique emergency first responder. (As long as you don’t question how some of the new front-and-centre tech clearly defies internal logic, we’re all good). And, again, though Admiral Vance comes across as the prickly, disapproving authoritarian, he’s entirely right that the new all-in value of the Discovery means that it has to boldly go where needed for the greater good and not warp out on a whim or personal agenda.

It’s with no disrespect to  Sonequa Martin-Green’s considerable talents that Michael Burnham remains a character largely defined by acting on impulse and making others pick up her pieces – a trait that’s been there since the first episode (where she pretty much ignited a war) but which has never really been improved, despite consequences. Burnham is the defacto ‘hero’ of the story and is brave and driven, but she’s also selfish and reckless. That should, in itself, make good drama, but in an ensemble-environment it’s also possible for other characters (and the viewers  themselves) to become somewhat frustrated with that narrative repetition. The continuing cycle of going against orders, putting others at risk, saving the day and then crying, feels like a template rather than a tentpole. Personally, it’s getting so I’d rather spend my time on other characters who have evolved further over time. To the show’s credit, the season’s production (and even close crew-mates Saru and Tilly) are at least calling Burnham out on that and her demotion from the only recently-granted ‘Number One’ status was as inevitable as necessary to remain ‘believable’ – though one wonders what the endgame of this will be and what balance between command-structure and moral imperative will be established? (It’s not as if the new Star Fleet is bad or that that Burnham can’t somewhat rationale her decisions on a moral level – so one can’t see either truly shifting their positions nor should they).

The return of David Ajala’s Book was inevitable and he makes a good addition to the cast. If we presume he’ll now be sticking around, it will be interesting to see how he fits in and the growign relationship between he and Michael certainly suggests that Burnham will indeed have to make a choice about her priorities and allegiances in the near future.

It is interesting – and a relief – to see Discovery otherwise avoiding drawing out story elements that might be season-long arcs in other shows. Adira (Blu del Barrio) and her unique, spiritual connection with former Trill host/boyfriend Gray (Ian Alexander) could easily have become the ‘is he real or not‘ question, but instead simply forms a nice side-story arc as Stamets (Anthony Rapp) recognises the strange complexities of keeping love alive beyond perceived life-and-death. Stamets and Adira now have a bond that understands that whether Gray is ‘real’ is hardly the most important question here and it’s to the writers’ credit that they’ve gone this route. It’s not entirely clear where the story with Georgiou is going – whether the visions she’s having are flashbacks (or flash-sideways?) but the ever-reliable Michelle Yeoh is still enjoyable as she snarks and shoots her way out of every situation. In many ways she’s the anti-Trek character that keeps the mainstays on their toes and one wonders how and when she’ll be written out for the proposed (but not yet in production Section 31 spin-off).

Though most of the fight-scenes are close-quarter combat and some blaster-explosions, the blending of set decoration and post-production visual-effects landscaping for some of the wider shots give the scrapyard prison a world-building feeling that momentarily feels like it could give moments in The Mandalorian a run for their money (and probably on a fraction of the budget), though is the ‘collateral damage prisoner’ sequence  a deliberate homage to the similar scene in Arnie’s The Running Man? 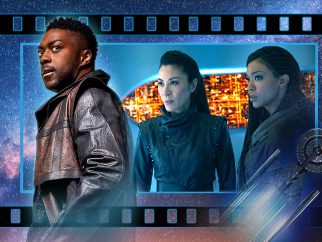