Yet another hi-def distraction for Mando - great franchise visuals but a familiar feel that has its pros and cons...

En route to find the Jedi and deliver ‘The Child’ safely, it’s clear that Mando’s ship, Razor’s Edge, won’t make it that far and so he decides to pull in for repairs on the planet of Nevarro, where he knows there’ll be some safety with old friends – or the closest thing he has. Nevarro’s main town has improved since his last visit with Greef Karga and Cara Dune making some long overdue changes, even helping build a school. But they still want any remnants of the Empire eradicated and they ask Mando to help them blow up an old base defended by, at best, a small group of stormtroopers.

However it turns out to be ‘at worst’ when it becomes clear that the old base is far from idle and hiding some significant secrets. It is far from abandoned… and deep within holds a major clue to why ‘The Child’ may be so important to the Empire…

The Razor’s Edge now looks to be literally held together by string and hope so a full-on repair is overdue, meaning a stop-over with friends Greef Karga (Carl Weathers and Cara Dune (Gina Carano) on Nevarro… thus providing yet another in/convenient pit-stop and extension to Mando’s quest and, surprise, surprise, another side-mission destined to not go as smoothly as promised. The fact that the ship gets a wash and brush-up in just a few hours before being fully space-worthy again suspends disbelief just a little higher than you’d want.

Baby Yoda is once again there mainly for the distraction factor – first with a direct homage/rip-off of Guardians of the Galaxy‘s Baby Groot bomb-trigger dilemma, followed by a comedic force-snack sequence in a makeshift classroom and then conveniently deposited off-camera yet again for much of the episode. (Mando himself is once again not the main player, reactive at best and off-screen for a significant chunk of the escape as the script sends him off to protect Baby Yoda (and then bring him right back into the battle). However, the real strength of the episode is a string of points providing clues as to why so many Empire stalwarts were after Baby Yoda in the first season – with the suggestion that Moff Gideon and his team were/are attempting to use samples of the infant’s midichlorian-rich blood as a source for a darker Force and a glimpse of a compartment with shadowy-looking experimental figures suggests they’ve not been idle. Technically, this could also relate to some of the from-the-dead technologies in the most recent Star Wars films.

There has been more of an effort to align elements of the original Star Wars trilogy lately. There are visual franchise callbacks with more storm-trooper battles long corridors that give a ‘Death Star’ escape feel to proceedings, an impressive dogfight with TIE fighters through the rocky Nevarro canyons and a suitably classic Empire-era command starship where we find yet another Moff has planted yet another tracking-device on yet another ship racing away from them (though that surely relied on the TIE pilots proving as bad in their aiming as their ground-forced counterparts otherwise Baby Yoda could be dead and all hopes of tracking any Jedi would be lost). In that sense, the series is delivering sequences that would have once been confined to the cinema screen, so that’s definitely a success.

Amid all that as-usual excellent CGI, one things stands out as unusually old-school and that’s the almost early-muppety ferret-like creature that takes a fancy to Carano’s Dune – it’s an odd addition that distracts rather than brings you in to the story, but otherwise the bigger set-pieces work well. Carano gets her contractual hand-to-hand combat scenes, of which the choreography works well. Her character has become a fan-favourite, though the actor herself has been controversial in recent months. It’s all directed by none other than Carl Weathers himself and he balances out the action and slower moments even if the dialogue itself seems somewhat stilted.

The second season of The Mandalorian feels better than the first – though that initial run still had many successes – but the template stories and pacing are still the major stumbling blocks that prevent it being as epic or exceptional as it could be… it’s  a prestige show that’s overtly marking time with a pleasant, professional beat and superior effects and budget but never any real surge of power or emotion that would have you punching the sky or spilling the popcorn.

Essentially, so far at least, The Mandalorian is still the kind of show you enjoy from the couch rather than the edge of your seat. 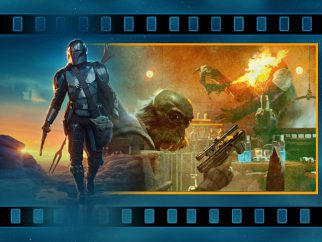