There's much to admire in Peacock's classic dystopian adaptation, but it also feels adrift and late to the party...

In the future metropolis of New London, its citizens are divided into classes. The Alpha and Beta classes have the authority over the likes of the Delta, Gamma and Epsilon and depending where you fit in, the resources of the city are at your disposal or you are. Monogamy is not just discouraged but essentially outlawed, the state frowning on any serious connection and loyalty to anything but the well-being and pleasure of the whole. But a Beta named Lenina Crowne (Jessica Brown Findlay) and her boss an Alpha,  Bernard Marx (Harry Lloyd) are both feeling resistant to the expectations placed on them, their ‘freedoms’ often seeming like societal shackles. Despite being very different people with different needs, they find an unlikely connection.

Neither of them know it, but a visit to a ‘resort’ known as the Savage Lands, in which an enclave of non-conformists essentially play-act for the delight of tourists, will not only change their lives but that of New London itself. And in the heart of the outlier community, a young man known as John the Savage (Alden Ehrenreich), with ties to both societies, is going to decide where his allegiances lie…

It’s hard to know whether the show’s lineage is  an advantage or not. Clearly, Aldous Huxley’s seminal dystopian tome, now rapidly closing in on a near-century in print, set the scene for many of the genre to come and therefore if there’s an over-familiarity in the sense of its scope then it’s not entirely at fault.  But while many of the elements and sentiments being explored are fine, the early episodes feel more about that world-building than they do anything else..  While the recent third season of Westworld sometimes fell into the same trap of ‘look how amazing this looks’, Brave New World’s familiar faces give it their all against a more trippy journey without really engaging on the emotional level needed.

For a concept about a hedonistic society that discourages monogamy, carefully governs pleasuring on a class-basis and punishes those who don’t abide, there’s obviously a fair amount of sexual politics and nudity – including an orgy scene that’s actually more choreographed than it appears. But while there’s enough context in the material to claim a ‘necessary’ defense, there’s also a very ‘early Torchwood‘ vibe in the sense that it feels like it needs  you to be applauding its daring when you’re actually not as shocked as it wants you to be – and it’s telling when it’s all likely met with a shrug rather than a sharp intake of breath.

Downton Abbey‘s Jessica Brown Findlay gives us a Lenina Crowne who navigates her way through her daily existence in a way that’s one-part ingenue and the other already world-weary. Harry Lloyd continues to make a strong impression in everything he does. Since an early role in the Human Nature episode of Doctor Who he’s proven memorable in the likes of Game of Thrones, The Theory of Everything, Counterpart, Marcella and the young Charles Xavier in Legion and here gives Bernard a familiar air of both arrogance and vulnerability. Alden Ehrenreich, who essayed the young Han Solo in the movie prequel, gives us an equally conflicted character given the chance to rebel but unsure of how to do so. The long-absent Demi Moore is striking, but initially unrecognisable in a more Blanche Dubois-esque role as John’s mother, prone to settling in front of the window in her lingerie and gazing out to lost horizons.

The creative team behind the production includes graphic novelist agitant Grant Morrison and Brian Taylor (who recently worked together on the more anarchic Happy!) but this venture, though full of recreational indulgences, initially feels like an abstract ode to melancholy than the outright nervous punk-energy of a drug-addict cop talking to an imaginary unicorn that was the previous benchmark for the duo. Perhaps its the presence of executive producer David Weiner (Fear the Walking Dead, Strange Angel) that’s provided the missing steadying missing piece of the puzzle.

Ambition and production values are key ingredients for success… but the pilot episode seeks a little too earnestly to make its impression and impress the audience but somehow the pieces and tone don’t quite come together – though things do improve after a meandering start. You certainly can’t dismiss Brave New World as a failure – it has much to offer and the budget and talent to supply it. But it feels that, as a modern adaptation more than its boundary-pushing source-material – it’s just a little late to the party as if several of the points it wants to make have already been well-orated elsewhere. If we hadn’t already had the likes of Westworld, Penny Dreadful: City of Angels and other stylish, ambitious projects gracing our screens and creating their own brave new worlds in past months – and seriously, for a year largely devoid of cinema, cable dramas have really stepped up their game – then there’s a chance that this early offering from Peacock‘s streaming service would feel more important and ground-breaking. That being said, as one of the few ‘Original‘ dramas on a platform largely driven – and financed – by a back-catalogue of acquisitions, it works well as a serious statement of intent and that the latest competitor feels ready to take on the likes of CBS All Access and Amazon, if not quite in the Netflix league as yet. 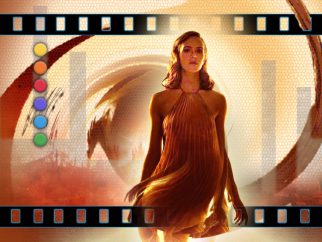