In the wake of police using the 'Punisher' logo and questions about brutality, will Marvel move to enforce copyright?

As well as officially-sanctioned merchandise, cultural icons and imagery are often found on less authorised media and in recent years some major corporations have had to step in and take legal action over the misuse of their property. Some companies are particularly litigious because if they let one person or entity get away with using their characters/designs without permission, it becomes far harder to take anyone to court for similar instances.

However, it’s become a more complex matter in the example of The Punisher who first appeared in 1974’s Amazing Spider-Man #129 ( The character has also appeared on screen with the likes of Dolph Lundgren, Thomas Jane, Ray Stevensen essaying him for movies and John Bernthal taking the role for two seasons of the Netflix show).

The Marvel Comics‘ character is the famous anti-hero and vigilante Frank Castle – a family-man and cop who sees his wife and daughter slaughtered after they accidentally disturb a gangland meeting. Frank survives but swears he will hunt down and kill the people responsible and then he continues to wage an unforgiving one-man war on crime, operating far outside the law. Always an anti-hero in most ways, over the years the character has moved in and out of ‘superhero’ stories but largely remained a brutal and violent character and even in an era where comics have explored the grey areas of morality, Marvel have been relatively careful never to glamourise the brutality  of what The Punisher does only mine the dramatic value. 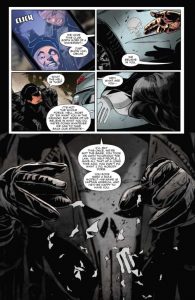 The Punisher ‘skull’ logo has become to turn up elsewhere and it was noticed that there have been many images of cops wearing a pin of the logo or stenciling it on clothing. That somewhat flies in the face of the character’s brutal loner, ‘outside-the-law’ tactics and becomes even more questionable in the wake of widespread accusations of police brutality, many instances highlighted after the murder of  George Floyd while being arrested. There were also other mixed-messages when Fox News pundit Sean Hannity wore  various Punisher pin on several editions of his show.

Many have questioned whether Marvel, driven by the current situation, will more actively seek to stop their character/logo being associated with real people and situations it might otherwise avoid. In a non-specific statement this week Marvel did not address any suggestions of legal action but referred to a reference deliberately made in a July 2019 issue of his comic where the character didn’t want the police to be like him. When congratulated by two cops for his actions, he replies:  “We’re not the same. You took an oath to uphold the law. You help people. I gave all that up a long time ago. You don’t do what I do. Nobody does. You boys need a role model? His name is Captain America, and he’ll be happy to have you…”

Punisher co-creator Gerry Conway went on the record about how uncomfortable he was with people celebrating and co-opting the symbol. In a January 2019 interview he told SyFy Wire that: “…it’s disturbing whenever I see authority figures embracing Punisher iconography because the Punisher represents a failure of the Justice system…He’s supposed to indict the collapse of social moral authority and the reality some people can’t depend on institutions like the police or the military to act in a just and capable way… If an officer of the law, representing the justice system puts a criminal’s symbol on his police car, or shares challenge coins honoring a criminal he or she is making a very ill-advised statement about their understanding of the law.”

In the wake of the Floyd murder and ongoing protests, The Walt Disney Company (which owns Marvel) pledged ‘$5million to support non-profit organisations that advance social justice‘. However comic writer Matt D.Wilson noted that amount was .007 of their annual revenue and others suggested that if the company had previously gone after even the smallest infringement of their characters including day-care centres, then it was more imperative than ever that the company move to distance itself from actual vigilante justice.

Some have argued that it would be pragmatically difficult to stop anyone wearing a handmade version of the logo, but others have pointed out the ‘official’ line from the police went beyond individual use. In 2019, when some of the members of the St. Louis Metropolitan Police Department were being investigated for posting controversial statements and images on social-media and the police union specifically asked its members to post a Punisher symbol in solidarity with those officers being investigated. (However Police Chief John Hayden, though not demanding they stop using it, noted that “the logo ‘does not coincide’ with the department’s “mission to protect life and property and achieve a peaceful society.”)

So far, with the Floyd protests continuing to make international headlines,  Disney have not made any official comment on any action they may be considering and stated simply: “We stand against racism. We stand for inclusion. We stand with our fellow Black employees, storytellers, creators and the entire Black community. We must unite and speak out.”