Some whiskey benefits from staying as long as possible in the barrel. That's not quite as true as ABC's new gun-toting global action series...

Will Chase (Scott Foley) is one of the FBI’s top agents, but even his colleagues are getting somewhat frustrated with his inability to get over the recent break-up of his engagement. Chase might be able to run, jump and handle bad guys with extreme prejudice, but at the moment he’s all too easily distracted by cheesy romantic movies, crying into tubs of ice-cream and wondering if he should try for a reconciliation.   When fellow agent Ray Prince (Josh Hopkins) is delayed en route to collect a deadly toxin from a renegade scientist, Will steps in, but things do not go well and his boss  seriously considers a re-assignment.

Bringing in a fugitive hacker Edgar Standish (Tyler James Williams)  who is hiding somewhere in Russia seems much easier by comparison, but Will is about to have his life complicated by Standish claiming he has dirt on a rogue operative in the FBI and by the attentions of  Frankie Trowbridge (Lauren Cohan) who has no time for Will’s touchy-feely demeanour and an agenda of her own.

If their enemies fail to kill them, will the rival, mismatched operatives do the job for them?

In the midst of a television season that’s seen several cult time-travel shows vanishing from screens (Timeless, Travelers and Doctor Who – the latter for just the rest of 2019, but…), it’s interesting that we’ve now got the debut of a new television series, Whiskey Cavalier, that feels like it’s jumped in the Tardis/Lifeboat back to the 1990s and an era when impossibly-groomed, globe-trotting, spy-fi antics were the name of the game and a cornerstone of the primetime schedules.  Y’know…the ‘Alias‘ era: before Bradley Cooper became a triple-threat Oscar crooner and before Jennifer Garner had a Capital One credit card.

First shown immediately after the Oscars (and after an imaginative but tsunami-level marketing campaign) but settling in to a regular Wednesday slot from tonight, it’s a show that obviously works well on paper (familiar franchise stars spy-fi’ing their way across Europe is a no brainer) but lovingly embraces every trope for which the genre is known.

It’s easy to see why Lauren Cohan leaped at the chance to jump ships. After nearly a decade of dark and gritty zombie-killing but less and less compelling stories as the character of Maggie Greene within AMC‘s The Walking Dead it probably took less than stalled contract negotiations for her to seize the moment and try something more upbeat – and leaving the option open to resume the role in possible specials. For Whiskey Cavalier, there’s certainly more world-saving than world-building  as she quips and kicks in high-heels and more bespoke fashion. Foley was also a mainstay of a more bloody show, playing Jake Ballard in Shona Rhimes political thriller/soap Scandal, which finished its run last year, sometimes containing plot-lines that were more unlikely than an apocalypse but which mainatained high viewing figures. It made total sense to find a vehicle for the two newly available stars. Here there is just as much deception and intrigue, but the result is more A-Team and Moonlighting than Mission Impossible or Jason Bourne, with bullets being strictly through-and-through with the scripted snark cutting deeper than any shrapnel.

In the age of female empowerment, there’s also a reasonable question to ask as to why the show, vaguely an ensemble but packaged and promoted for the last year as a two-lead outing, is singularly entitled Whiskey Cavalier (which is Will Chase’s codename) and not with a moniker that combines it with Frankie’s. Even if there’s more pragmatic reasons, it feels wholly shortsighted and sexist. There’s some chemistry at work between the leads, but it feels diluted, distilled down to a very basic carbonated formula. Will’s an overtly emotional train-wreck in the relationship department after his engagement became disengaged, Frankie is detached, the death of her parents and past experiences making her believe that attachments are for losers. The anchor is supposed to be how such ‘different’ people can work together, but the pilot doesn’t offer us enough depth to be anything but broad caricature.  There’s more froth here than a corner-block Starbucks, delivered with the same amount of regulation smiles and sprinkles of snark. It’ll keep you going for a while, but being full of beans isn’t quite enough.

There’s a reasonable polish to proceedings – the fight scenes decently choreographed and the backdrops sufficiently picturesque. Though the show has a habit of flashing to scene-setting landscapes with conveniently-placed landmarks – obviously inserted into the digital  skyline later – the Prague-based production does allow avoidance of the familiar re-dressed backdrops that pop up in many a tv show and ultimately for some more authentic-looking European / international environments (the city doubling for Russia and Germany and a range of outside-the-US locales).

The pilot takes its full forty-four minutes to establish the template for the series going forward, but given that the characters are not brought together as a formal investigative unit until the epilogue and then for an unknown, arbitrary reason (other than…’hey,  that’s the premise!‘…) it feels like a good thirty minutes of that could have been disposed with as an intro. It’s entirely possible to guess the future story beats for episodes (comical misunderstandings, mild sexual tension and artificial obstacles etc etc )  and maybe the entire potential entire seasons to come. But it’s all easy on the eye, easier on the brain and has a picture-postcard quality that says ‘Wish you were here?‘ with just a certain amount of pleading in its voice that will likely lead to you watching it again despite yourself.

Whether there’s enough here to raise it above pleasant distraction and to generate the large and loyal audience it will desperately need to differentiate itself from other shows in primetime, rather than the casual viewership is seems destined for…is open to question. 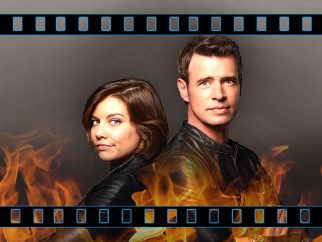