Jennifer Garner returns to the action genre, but the tired, trope-filled result isn't any sort of tasteful treat...

Riley North (Jennifer Garner) is a typical cash-strapped suburban mother, getting by as best she can. When the birthday party for her daughter Carly (Cailey Fleming) is sabotaged by a spiteful fellow school mom, Riley and husband Chris (Jeff Hephner) take Carly out for an evening at the local funfair. But one of Chris’ co-workers had a plan to steal from a local drug-pusher and though Chris refused to be involved, he’s been implicated and targeted by the dealer’s gang.  The family are caught in a hail of bullets that leaves Carly and Chris dead and Riley in intensive care.

Able to identify the assailants, she’s promised justice but as soon as she gets to court it becomes clear that a corrupt system is going to ensure the killers get away. Attempting to attack them in open court, Riley is led away but when it seems she’s going to be detained over the state of her own mental health, she knocks out seemingly sympathetic cop  (John Gallagher Jnr.) and escapes.

For five years she vanishes from LA, apparently stealing a large sum of money from the bank where she worked, and though the authorities hear of occasional sightings of her in Europe, she appears to be a ghost.  Then, almost five years to the day since the tragedy, the FBI starts to notice a pattern to a series of suspicious local deaths.  They are all seem to be linked to the North tragedy and its aftermath.

It appears Riley North is back in town…

In 2010 the film Salt was released featuring Angelina Jolie as a CIA agent on the run after being accused of being a spy. The film was made more noticeable than some of its counterparts because the original film had been tailored as a Tom Cruise vehicle but after he left the project, it was retooled for a female lead.  Watching another film with a flavour-filled title, this year’s Peppermint, there’s a distinct feeling that at somewhere in its early development someone had a similar conversation. A ‘Hey, wait…what if The Punisher was a woman?‘

And, realistically, in a film that could have been both inventive and subversive – but which somehow manages to be neither – that gender-reversal is the film’s one and only hook. With the exception of returning Jennifer Garner to the action presence she had before a raft of rom-coms and Capital One commercials (older audience members will still remember her breakthrough series Alias and the sometimes maligned Daredevil spin-off Elektra) there’s very little here that doesn’t feel like a trope-ridden, eighties-formula revenge flick. And not even a particularly good one.

Garner, a capable actor who has never really had the career expected, deserves better and could certainly have provided it if the script and direction had been stronger. She handles the physical aspect as if it was still second-nature. However she is largely stuck going through the formula motions of an non-challenging, uninspired vigilante chic revenge fantasy where a supposedly edgy thriller plays it entirely safely: a white suburban mom’s severe PTSD is a sympathetic reason d’etre for talking out a latino gang. Riley simply stabs, shoots and blows up the over-inked-up villains with all the consequence and accuracy of a video-game and only ever being temporarily injured when the script demands some minor blood-letting and band-aids.

Despite a couple of brief scenes that rather ham-fistedly try to show Riley’s submerged maternal instincts (a couple of photogenic orphan street-kids protect her van from a hard-knock life and she punishes a fairweather dad for neglecting his child by putting a gun in his mouth in the middle of a convenience store) there’s no real character development for the main character beyond turning her into Linda Hamilton-lite, never mind the sketched-in supporting cast.

Just as little deters Riley from her singular mission, the film refuses to get distracted with other pesky details. The most cursory lip-service is given to the hows of Riley’s (off-screen) theft from her bank (enough to buy her all the arms and fake IDs she wants, but apparently no accommodation except a skid row van), how she became so well-trained (‘cage-fights’ and ‘Eastern Europe’ are conveniently referenced with all the subtlety of a Seagal resume) and the growing ‘media coverage’ that follows in her wake largely takes the form of  unconvincing cookie-cutter graphic packages and the highly unlikely decision of a network to ‘live-stream’ Riley’s smartphone’d final face-off to the masses.

The Newsroom‘s John Gallagher Jnr. is miscast as the cop who initially promises her justice and then is tasked with chasing Riley down.  Six‘s Juan Pablo Raba sneers his way through as gangland middleweight Diego Garcia who simply barks orders and insults to his minions. Audiences may also recognise Cailey Fleming (who plays Carly) for her recent casting in The Walking Dead, but she got more development in one introductory scene as Judith Grimes than she gets in the whole of this film).

Had the film made good use of Garner’s wider acting skills… had it made the hero a person of colour (oh, likely a whole different movie)…had the majority of the villains been more than lazy racial stereotypes themselves… had director Pierre Morel shown any of the flair he demonstrated with a superior example of the genre, Taken… or had the media-coverage of Riley’s campaign even reached the two dimensional, Peppermint might have been a more tasty treat into which to sink your teeth and time – but without any of them this isn’t even a guilty pleasure. Instead, its sugar-rush quickly turns sour and there’s nothing left but the aftertaste of something that turns out to be well past its expiration date…

Peppermint is released on to DVD  on 11th December (US) 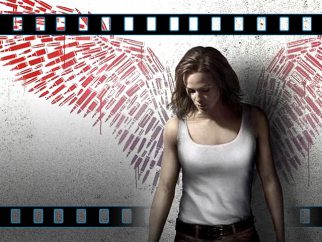 The Nun: Not with a bang but a wimple…