While a welcome call-out to female empowerment, the latest 'Doctor Who' episode needs some spell-checking...

But when it becomes clear that a force not of this world is affecting the area, will the Doctor be able to find a way to uncover the truth that protects everyone, or has the finger-pointing and paranoia already spread too far?

The shortest of the episodes to date – for no apparent reason, as we could certainly have done with some additional scenes – we are dropped into Team Tardis already traversing 17th century Lancashire  – equally for no apparent reason, but it seems that the crew are getting a little blasé about the randomness of their travels. With a timely reminder that they must watch but never interfere, the Doctor watches as a medicine woman is dunked to death in fear of her being a witch and… proceeds to stop watching and start interfering immediately.  It might have worked better for all concerned, instead of an ill-fated, CPR-free rescue attempt the Doctor had halted proceedings by flashing her psychic paper a little quicker.

The Witchfinders seeks to raise a slurry of issues from the mud, some more successfully than others. On one hand it’s interesting and telling that the Doctor’s new outward female appearance quickly works against her in the 17th century and much is discussed of the way that women were/are patronised, insulted and accused merely as a result of their gender.  It’s an issue that one might expect to fit well in a story that could and should also take in paranoia, power-plays and mob-mentality. But with so many potential targets, most get lip-service rather than any definitive blows or examination.

For all the talk of sexism – and the undeniable fact that far more women were historically accused of witchcraft than men, for reasons more to do with cultural oppression  –   it’s done so in an episode where even the psychic paper inexplicably sees fit to change its mind and give the Doctor a lower position and where the main antagonist is a woman (who boasts of being a wealthy landowner who commands the fear and loyalty of the locals, if not actual respect). The main ‘face’ of the muddy threat is also the hijacked corpse of the local medicine grandmother. At one point Mandip Gill’s Yaz tries to find common-ground with Willa’s forlorn villager, but her talk of coping with depression and finding inner strength in the face of bullying might have worked better if it didn’t appear from nowhere, never mentioned before and  which feels like convenient scripted dialogue rather than organic empowerment.

Alan Cumming, subversive in everything he does, cashes ye olde cheque and chews the scenery as if it’s the last meal he’ll ever have. However, while he’s clearly having a whale of a time, there’s a wholly inconsistent tone at work in his performance: One minute, the King of England is talking with all the gusto of a zealot about fighting for God and country and the next there’s a camp, flirtatious undercurrent (largely aimed at Ryan) that would fit snugly between Torchwood and a Carry On film. If the idea is that small, scared men with large amounts of power are dangerous, then one needs to understand how they can get away with it. Cumming has done wiley, manipulative and morally-questionable roles before – indeed he’s often a delight to watch as he slinks and snarks his way across a screen. But here’s there’s very little of the unflinching regal presence the role desperately needs – no empowering entourage, no effective physical intimidation and clearly an unlikely willingness to take a lot of lip from uppity strangers. The result is more akin to dealing with an annoyingly ignorant and arrogant middle-management bureaucrat with a security fixation than a holier-than-thou murderous monarch. Once again, it’s The Doctor and Graham that have the best lines with Yaz and Ryan thrown the scraps.

The revelation of the actual alien threat is a head-scratcher – apparently the threat is a bunch of alien war criminals who have been broken down into sub-atomic form and who have seeped out through a dead tree because it’s really a billion year old broken cosmic lock and managed to turn villagers into zombies so they can get another one of the infected to fully release them. It all seems overtly complex and muddled (a penal colony existing under Lancashire not withstanding)…  yet the Doctor works most of it out by glancing at her wand/sonic for a few seconds. At least the story throws the Doctor and friends into the mix more actively. Previous historicals this season have made the team witnesses rather than active participants and if the fact that ‘history doesn’t recall any of this’  is a convenient get-out allowing the Doctor some wiggle-room, so be it.

One has to remember  – and it’s easy to forget as one grows older – that the show walks a line between genuine scares and family entertainment.  By its very remit,  it needs to be kid-friendly entertainment, even if it occasionally scares them, educates them and pushes at their boundaries. This season has been proof-positive that Chibnall is fully endorsing that age-group position and the result is a series of stories that have generally been pitched in more simplistic terms and you would need to ask kids (who might have been lost in some of the Moffat mythology) if they feel better or worse for it. But the result is that The Witchfinders can only nod gently to some of the horror tales that influence this chapter and we have a historical entry that feels like a broadstroked  ‘Pendle/Salem Witches: The Pantomime’  (So much so, I found myself examining the face of the no-dialogue ‘extra’ mud-witches to see if they were doing ‘supporting players’ double-duty as unnamed, equally anonymous villagers – all of whom proved rather pointless to proceedings and stand around like they’ve just missed all the good buys at the  Black Friday sales).  Equally, the special-effects are disappointingly slipshod with the revealed alien-visages looking half-hearted, the tentacles looking horribly hentai and the post-production copper-tinting of flames presumably meant to suggest some sort of cheap cosmic power at work.

A Hartnell-era story with a McCoy-era approach, the well-meaning The Witchfinders may find its otherworldly threat but it’s an episode which can’t find its tone. 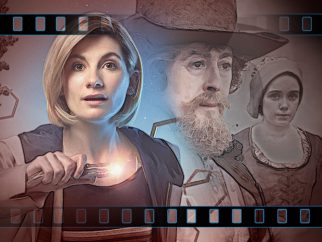