While 'Fantastic Beasts' was a menagarie of magic, its sequel is an historical hodge-podge of tones and talking...

A year after his adventures in New York, circa late 1920s, Newt Scamander (Eddie Redmayne)’s brother Theseus (Callum Turner) hopes he can talk his sibling into formally joining the Ministry of Magic but Newt has no intention of taking sides in a climate that feels more like powerplay than principles.  However Albus Dumbledore (Jude Law) brings news that Credence Barebone (Ezra Miller) may have survived his fateful encounter under New York and now appears to be in Paris seeking answers to his true parentage.

Grindelwald (Johnny Depp), having escaped captivity, is also en route to Paris, knowing full well that there if is a human/magic conflict to come, he may need all the support and power he can get.

As allies and foes draw near, everyone will have to examine their conscience and ask what they are prepared to do to survive…

“Oh, Newt… you never met a monster you couldn’t love.”

Fantastic Beasts and Where to Find Them was an interesting addition to the Harry Potterverse. What could initially have been seen as an opportunistic way to simply extend the reach of the blockbuster franchise actually ended up having a distinct personality of its own and a triumph of walking the line between old and new. Indeed, except for some suitable touchstones and references, the change in time-frame and locale  – from late twentieth century England to 1920s New York – makes the story feel a separate beast from what we’ve seen before. The ‘Americanisation’ of some of the core concepts didn’t, as some might have feared, make it feel diluted or hijacked. We were looking at the same universe, just a distinctly different cultural corner – proving it was ever so.

The Crimes of Grindelwald isn’t quite as successful, as if wanting to take this new addition and graft it back awkwardly on to the main body whether it wants to be or not. With its sense of  ‘dark-side’ temptations, left-field familial revelations and romantic misunderstandings (and simply being a middle-chapter clearly designed to upset the status-quo) this feels like an attempt to produce an Empire Strikes Back vibe to proceedings, but it has far too undisciplined in its approach with too many threads and side-missions for the centre to hold as strongly as that would entail. The Harry Potter stories got darker as they progressed, but this feels more like a handbrake turn… and one complicated by having far too much going on and being asked to invest in people and situations that feel out of place. The climax packs a wallop when it comes, but the trial to get there meanders far too much. More than once, you wish you could stop the film for a few moments and rush off to consult a Wizard World Wikipedia to get everything straight, but even then die-hard Potter fans might be the first to point out that some of the information and elements in the story don’t appear to line-up with established lore.

The special effect, CGI-set-pieces, often pertaining to the zoological contents of Newt’s bigger-on-the-inside briefcase, are as well executed as ever, but continue to be twice as interesting as their owner. In fact, the film’s main problem is that its central characters are arguably far less interesting than the supporting characters who orbit them.

Eddie Redmayne bumbles around once again as Newt, Matt-Smith-Doctoring his way through well-meant proceedings but somehow just missing the degree of sheer innocence and pure-heartedness that made the first film such a delight. Here he’s co-opted by Dumbledore to essentially drop behind enemy lines and discover what’s going on and however much he’s the emotional centre of the film (“Do you know why I admire you, Newt? You do not seek power. You simply ask, ‘Is a thing… right?’” offers Dumbledore) he still seems somewhat compromised and more world-weary. Jude Law is interesting and enigmatic as a younger Dumbledore, planting seeds of just how manipulative he could always be when needs must –  but despite having key scenes that show him wandering among Hogwarts’ familiar turrets and bridges, it’s hard to see any visual throughline that would take the tweed-suited, magical tutor to a flowingly-cloaked, bewhiskered wizard (played in the Potter movies by Richard Harris and Michael Gambon) in a single lifetime.

Depp may have had troubling times off-screen of late, but he’s always excelled on-screen in playing almost theatrical, outlier characters. The problem is that his Grindlewald and titular crimes are almost incidental to huge swathes of the film – the maguffin bookends of the film and, frankly, the character proved far more a direct threat when he was Colin Farrell. Yes, Grindlewald escapes early on, killing his captors and has a political rally at the climax, but for the most part he then simply lurks around Paris, looking like a nefarious distant cousin of Bowie’s Labyrinth goblin king Jareth and making plans to win the more militant and susceptible fringe of the magic community to his side against the dangers brought by mainstream humanity. As an audience you’re never quite sure if he’s diabolically evil or amorally desperate. His dire predictions of the Second World War provide one of the film’s truest chills and give the fantastical elements some grounding in real history – but while his speech seems genuinely earnest, his actions feel more self-serving as he holds court.

Alison Sodol (as Queenie) and Dan Fogler (as Jacob) were the whimsical melody underlining the original’s action but here they seem to be window-dressing – and  have far too little to do for most of the film until a fateful decision later on (which also feels like set-up for later chapters). Katherine Waterston’s Tina is drafted back to service but she too seems like a diluted version of her more driven personality from Fantastic Beasts. Zoe Kravitz makes an alluring Leta Lastrange but she’s the kind of character about whom much is inferred and who is a catalyst for certain story-points, but there are far few details to fill in the gaps and certain revelations come far too late to keep her as interesting or as relevant as the story believes her to be.

J K Rowling’s best successes are those imbued with characters digging deep and finding something for which to be heroic, but this feels like a movie that’s got more ambition than it has heart – as if it’s positioning far too many characters to care about, for events that are still too far away to care about and in doing so, loses sight of the characters we already do care about. The Crimes of Grindelwald directed by Potter mainstay David Yates, is not a crime so much as a well-intentioned misdemeanor:  a mess – sometimes gloriously, beautifully chaotic and at other times merely a tapestry far too heavy to hang together successfully… 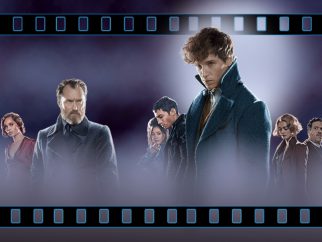