It is the early days of the Federation – a decade before Kirk and his crew will go boldly. The starship USS Shenzhou  is exploring damage to a space platform at the edge of Federation territory when its sensors pick up an anomaly, an object that defies most of the ship’s capabilities to further identify it. The Shenzhou’s Captain Georgiou (Michelle Yeoh) considers all the appropriate options and is persuaded by her First Officer Michael Burnham (Sonequa Martin-Green) to let Burhman do a fly-by in a small armoured suit with thrusters.

What Burnham encounters is about to change the direction of interstellar relations as the Federation and the Klingon Empire find themselves at an impasse, especially when a group of zealots seem determined to start a war. But do Burnham’s subsequent actions help or hinder?  It’s one thing to finish a war before it begins, but what do you do when either action or inaction could doom millions?

A good twenty minutes later than advertised on the day itself, six months after original deadline and arguably several years later than needed, Star Trek‘s latest venture ‘Discovery‘  headed into the final frontier on Sunday night, phase-cannons on stand-by, lens-flare on maximum and ready to impress.

The opening credits may have the least memorable theme tune for a Trek show in the franchise’s history, but the visuals are crisp and interesting – a draughtsman’s board of the technology we’ve come to know and appreciate. In that sense, they provide a slice of what’s to come… 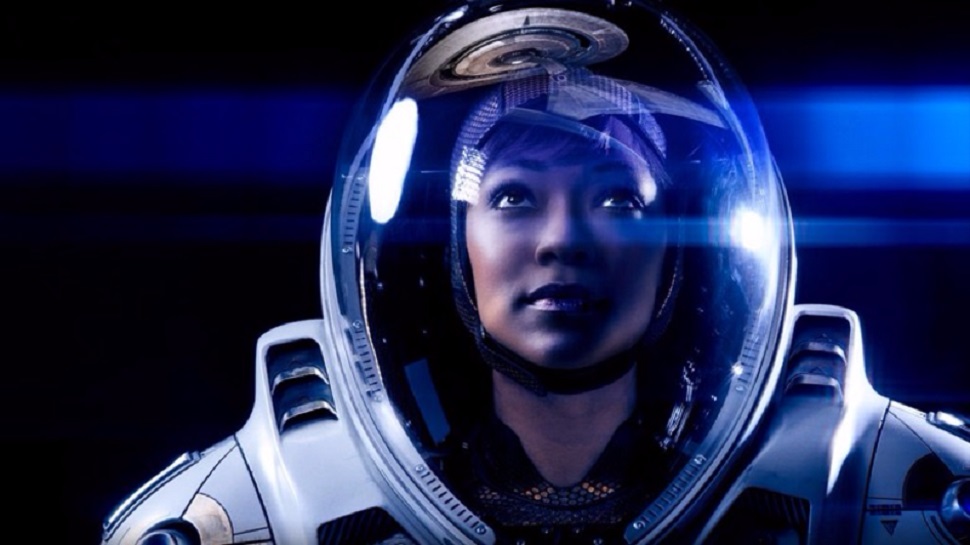 And that is wonder and disbelief in perhaps equal measure – a valiant attempt to both celebrate the show and carve out a singular new niche… but also one that shows the fracture lines of its difficult route to the screen and the changes of personnel and direction to get it on (and in) the air.  It’s said that this all takes place in the Trek universe of old, rather than the J J Abrams’ reboot that it most resembles in tone. Quite why the story is set in the early days of the Federation is also a mystery. Thematically and visually, there’s little reason that the story couldn’t be more free of constraints if it was set after the likes of The Next Generation, Deep Space Nine and Voyager, but there does seem a desire to go back and fill all the empty spaces of the past.

The fact is, the pilot episodes (the first of which, entitled The Vulcan Hello, aired on CBS with the second, Battle at the Binary Stars, being made instantly available on the subscription service) had a lot of plus-points. The level of visual-effects, particularly if you were watching in high-definition, was a rich mixture of hues and pixels… a somewhat different palette than we’ve seen in any Trek television series to date.  From the shiny metallic yet darker-lit bridge of the  USS Shenzhou to the vast dusty wastes of a drought-ravaged planetoid (the latter being a statement of budget and intent rather than remotely necessary to the plot), there’s a lot to impress the eye.  Every moment says ‘a lot of money was invested in this‘ and it’s largely well used to that effect.

Amid the shiny new CGI, another prosthetic redesign for the Klingons will be divisive. These are still the gutteral warrior race we know, but it’s now more animalistic than ever before and they seem to have been given a Game of Thrones make-over, like White Walkers with an opposite pigmentation. They are more ‘not us’ than ever and that’s a cornerstone of the universe  into which we’re now being asked to go boldly.

In that aspect – and story-wise – it’s slightly more problematic. Those expecting standalone stories will have to get used to the longer-arc episodic structure with little immediate resolution. A pilot episode should define the mission objectives, but The Vulcan Hello is very much a showcase without that needed structure, the first half of a set-up which would have been far better brought together as one with the following Battle at the Binary Stars. Those only able to watch the first 44 minutes (and that’s a majority of people) may have found their interest piqued but not satiated. They may also have found Michael  Burnham too bristly and ill-defined in the first episode… torn between aspects that make her a maverick, others that make her a soldier and for some bizarre reason given a familial connection to the house of Spock.   Yes, Burnham is potentially interesting, flawed and complex and Martin-Green gives a strong enough performance to make us forget Sasha –  her Walking Dead character – quickly enough…but it’s far from clear whether the intent to build the show around her has enough impetus from the opening salvo. It also feels like she’s been given arbitrary and conflicting character traits that don’t sit well together so far.

Michelle Yeoh is an internationally appreciated actor and is fitted with a elder statesmen role to suit – she’s also the only character that embodies what we recognise as the Roddenberry vision. Star Fleet and the Federation were always militaristic in structure but it’s not clear if the audience are supposed to be sympathetic to a possibly-concussed officer wanting to unilaterally declare war and pre-emptively open fire on a possibly enemy vessel ‘for the greater good’.  If Roddenberry’s original approach spoke to a bigger more optimistic future beyond the present, this latest is Trek is quite the opposite, rooted firmly in dirty wars of suicide missions, fanatics, expediency and ‘do unto others as they would do unto you – but do it first‘  pre-emptive mentality…  Burnham is our ‘hero’ – I felt she was quite the opposite here, whatever the outcome.  Equally if the abrupt ending of The Vulcan Hello is meant to be dramatic it feels more like sloppy editing than a cliffhanger. With the ship of the title yet to make its debut before episode three, the pacing continues to be questionable.

What IS bizarre is the marketing strategy for the show. For a show that will now have to contend with being on a subscription-service (CBS All-Access in the United States)… one that anyone liking the show will have to dig into their reserves to pay for (rather than normal network tv or a far more diverse and established platform like HBO and Netflix, though the show will be on Netflix outside the US)… a series that comes with a lot of expectations because of previous misfires and – let’s be brutal here – is saddled with an acronym that unfortunately reads ‘STD’, one would expect CBS to utilise every conceivable avenue in its galactic arsenal to get interest in the show raging.

But the day before the show aired, only a handful of critics had been allowed to see it – and then largely those based solely in LA and physical travelling distance. Scores of online and magazine reviewers, some who would likely be the most obvious cheerleaders for the show, were denied access to screeners and even those who did get an LA invite were forbidden from running any significant comments until after broadcast. Given the fact that hit shows such as Doctor Who and The Defenders issue selective but reliable previews to journalists a few days ahead of transmission, many reasonably asked: what’s going on?  Keeping a significant debut hidden ahead of release is a well-known tactic that movie studios have used for some of their most famous misfires… knowing full well that they have a turkey and offering up every restriction to that revelation by denying access in the hope of recouping some box-office from a public unaware of what they’re about to suffer through.

But with this new Trek having many decent selling-points… far from being a turkey, it could easily swoop and soar if given the right nuturing…  the strange decisions around its launch simply seem a self-defeating strategy. The new Trek already needed to be ‘big’ to make CBS‘ platform decision a viable choice – is someone really going to pony-up for CBS All Access if they already have HBO, Netflix, Amazon Prime, Starz etc? –  but in effectively hiding it from view at a time when trumpets should be blaring and warp-drives engaged, the ‘success’ level had to go from ‘big’ to ‘huge’. Unless the show came storming out of the gates  a la The Walking Dead – which did so in a blaze of publicity – then unnecessary problems have hobbled Discovery‘s warp drive.  The debut was good… but not THAT good.

Star Trek: Discovery feels like it’s trying to be all things to all fans – some of which it pulls off admirably, some of which feels shoe-horned in to mirror-mirror a landscape that feels truly alien to the franchise.  There are risks to that but that’s not always a bad thing. Only continued viewing will prove which aspect will be the most telling and for that you’ll have to pay. Now that really is the Undiscovered Country…