Marvel's had a strong track-record at the box-office and decent successes on television, but 'Inhumans' is a total misfire...

While Inhumans have appeared on Earth in recent years, thanks to events in the Agents of SHIELD series, some of the original bloodline of the species have actually been living in a huge secret city – Atillan – on the dark side of the moon. But all is not well in their society. The lower classes are resentful of their empowered elite and even within the society’s royal family there’s trouble brewing.

Atillan is ruled by Medusa (Serinsa Swan) and Black Bolt (Anson Mount), but Maximus (Iwan Rheon) believes that it’s only a matter of time before Earth discovers their existence and wants to act pre-emptively. To that end he’s about to take a huge risk and seize power. Medusa and Black Bolt escape to the world below, but with limited resources, how are the Inhumans going to survive?

From the outset, there’s something inherently clunky in the execution of Marvel‘s latest tv show, a series that pontificates on the problems of warring species and evolution imperatives by merely shouting ‘They’re behind you!‘ and then asking everyone to run.  Slo-mo shots may have an artistic look to them as raindrops freeze beautifully in the air, but when accompanied by dialogue so heavy with exposition that it could be used to sink ships…. it’s little compensation. The amount of “What do you mean?“and “You know what this means!” quickly becomes meaningless.

With all the urgency of a Game of Thrones played out on immodium,  the actual politics on show are disappointingly  two dimensional and conflicting but hardly captivating. If we’re being asked to boo the duplicitous Maximus and his ‘strike first, shoot people now and later‘ mentality are we then supposed to cheer for Medusa and Black Bolt and a dynasty that seems happy to have non-powered slaves working in the mines? If we’re not supposed to scrutinise the series’ foundations so closely, then the show needs a more knowing and self-deprecating script instead of its ridiculously furrowed brow and air of manufactured angst

The casting, while adequate, is nothing to get excited about, the performers all too often let down by their material. Serinda Swan has the necessary regal air about her, but Medusa’s adventures in hair-dressing is a step back from the more realistic strands we’ve already seen in animated fare such as Brave. It may be acceptable when simply left to flow over her shoulders, but when used as a weapon it’s cartoon-level at best. Equally it’s quite obvious when it’s a coloured wig and when it’s a matter of post-production – sometimes in the same scene. An emotional scene at the end of the first episode where Medusa is readied to be shorn of her locks should be as harrowing as when something similar happens to Cersei Lannister in Game of Thrones or Evey Hammond in V for Vendetta, but the wielding of an electric razor is executed in a way that threatens to verge on the almost comical and robbed of emotional power because we really don’t care.

Iwan Rheon, most recognisable as Ramsay Bolton in Game of Thrones, is the main antagonist here, Maximus, a non-empowered Inhuman with desires to usurp his familial connections and rule Atillan. One might think that stripped of Ramsay’s brand of sheer sadism, Rheon would be able to give a more nuanced ‘bad’ guy – especially as his Inhumans character may have a valid point about the status quo –  but we’ve essentially gone from an R-rated reaver to a strictly PG-rated petulant pantomine villain.

Elsewhere Ken Leung’s sardonic Karnak is fun but his precognitive, odds-assessing abilities are somewhat ill-defined. Isabelle Cornish’s Crystal is a lunar valley girl, a character seemingly transplanted form Rodeo Drive to the moon, complete with cosmic ear-phones and the giant bulldog Lockjaw whom she’d likely carry around in a purse if only someone manufactured one of sufficient size. Lockjaw, himself, though impressively rendered in CGI is merely a Disney-fied version of the not disimilar Okja (still available to watch on Netflix), but essentially fills the role of the cute animal mascot seen in almost every 1980s tv animated show.

Anson Mount, silent throughout and using sign language, is ironically the most expressive of the ensemble, but the one-sided conversations feel forced and driven by a need to relay plot-points rather than portray organic dialogue. One scene where Medusa urgently tries to contact Black Bolt urging him to ‘Answer his com-link‘ leaves you shouting at the screen: ‘And how exactly is he supposed to do that???‘

The Inhumans‘ show-runner is Scott Buck, who was also responsible for the first season of Iron Fist. This latest entry on his resume makes the former, somewhat troubled, production look like Oscar-winning material. Iron Fist suffered from miscasting its lead and inconsistent action – which at least improved as it progressed. The choreography on Inhumans is consistently dire, needing quickfire edits or slo-mo to produce any kind of momentum. An attempt to be edgy results in an inferior version of The Rolling Stones‘ Paint it Black as the soundtrack of the Atillan coup, but those responsible should be taken outside and shot.

Inhumans will fill the tv schedule gap until Agents of SHIELD returns. But unless it emerges from its own Terrigen mists having evolved quickly and dramatically into something more dynamic, then this is a limited series that is heading for a evolutionary cul-de-sac and an early demise…

Inhumans is on ABC in the United States and will debut on SKY in the UK soon. 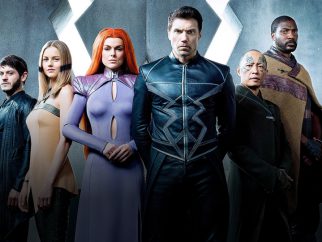