Staggering or meandering? Did AMC's zombie-franchise finale have its finger on the pulse or not?

After eleven years, an evolution of its cast and only a few less time jumps than House of the Dragon, AMC‘s The Walking Dead bowed out this weekend. When the series debuted in 2011 it was not the touchpaper that lit the fire under the zombie genre, but it did stake its claim.

By something of a crossbow’d longshot, this final series was not its best, but neither was it a disaster. After becoming becalmed a few years ago and losing a number of its stars, the show recovered some of its energy under new showrunner Angela Kang but there was still a feeling that the show had lost some of its momentum. The survivors stumbled from enemy to enemy and the once-shocking developments where anyone could die failed to generate tension no longer seemed so arbitrary… Story-arcs were spread out as orchestrated events kept splitting up ensembles so that it could be weeks later before we rejoined them. And in Season 11, the scrutiny of old politics surfacing in the new societies like the Commonwealth was fine as a story-thread, but it didn’t feel like a show was firing up for any kind of dynamic endgame.

Robert Kirkman, who created the source material comics made the controversial, yet in hindsight very savvy decision to bring his original version of the story to an unexpected conclusion after nearly 150 issues. (SPOILERS >>>) In the comics, Rick – who had been around for the duration, is murdered by Sebastian, the petulant offspring of the Commonwealth’s leader Pamela Milton but the act in itself brings about a chain of events that end the conflict and Kirkman pivoted his very final issue to an adult Carl, years after the loss of his father, looking back on his life and priorities in a society that felt like a new frontier. Of course, Andrew Lincoln and Chandler Riggs (the show’s Rick and Carl, respectively) were no longer around to fulfil that ending for the show, so viewers knew that things had to play out differently. That would have worked to the show’s favour and the idea that no-one was truly safe if AMC hadn’t then prematurely announced three spin-off shows, Daryl Dixon (featuring Norman Reedus), Dead City aka Isle of the Dead (featuring Jeffrey Dean Morgan and Lauren Cohan) and a mini-series featuring the return of Rick and Michonne. In short, the show squandered its potentially lucrative apocalyptic real estate.

So how did The Walking Dead‘s 90-minute finale, unavailable in advance to subscribers or reviewers, end its marathon?

The Walking Dead sometimes soared, sometimes staggered and the finale reflects both the age and the mileage. There’s lots to like here and for fans it’s likely less of a great, climactic send-off as more of a decent nostalgia-fest for all the elements that once powered the series through the early years. And given that those spin-offs are already getting scheduled, it all feels like a pause rather than an ending.

It was… fine. Truthfully, though the announcement of the series finishing came over two years ago, there’s almost a feeling that this was a season half-conceived as just another run and then altered to conclude in the way it does. Because…. well, court-room drama, political corruption, investigative journalism and the undead reduced to background irritation and then a host of new ideas (such as semi-skilled zombies) being only half-explored before things have to rush to a conclusion…. did not really generate a sense of rushing towards the finishing lines with previously unrealised stakes.

That being said, the budget was clearly raised – the hordes were bigger, the deaths more bloody and by the end, ‘scorched earth’ was achieved with some wall-to-wall CGI.

Things begin in a mad rush as we pick up from the end of the previous episode and all our heroes pinned in as the horde converges through the network of alleyways. There’s palpable panic and sense of imminent threats than there’s been for some time. While it’s hard to keep track of where everyone is (which side of Pamela Milton’s barricade are they on?) that’s part of the chaotic fight-and-flight vibe. Daryl and Judith manage to make it to a medical facility but it’s been abandoned where they each save each other though both end up worse for wear.

There were nice callbacks – placing some of the action in a hospital (as Judith varied between Little Ass-Kicker and Little Comatose Girl, as the plot demanded) meant some visual references to the opening episode in which daddy Rick Grimes woke up and found himself barricaded away from the undead and various zombie encounters seemed to recall some of the more visceral deaths the show gave us in earlier years. For a full-on series finale there were only a few fatalities… Alex Sgambati’s Jules got viciously gnawed on early and Dan Fogler’s Luke only lasted a few minutes more (but, let’s be honest, they’d only reappeared after more than a year-long of being AWOL, so even their bloody demise didn’t hit too hard). Thankfully, the notion that the likes of Eugene (Josh McDermitt) or even the beloved Jerry (Cooper Andrews) might be forced to make the ultimate sacrifice didn’t transpire. The episode toyed with us a little with Rosita (Christian Serratos), her early plunge with her baby into a horde below seemed to indicate the episode meant serious business, but she then sprang free in the type of single-bound fashion only-in-television…  (huzzah!) and then secretly revealed to Eugene she’s been bitten during it all (boo!). Though meaningful, the episode gave her the most quiet and gentle send-off, bed-ridden on perfectly pristine sheets, with barely a literal sweat as she passes after saying goodbye to her extended family. It’s touching, but one almost yearns for her to have gone out in a blaze of glory rather than nostalgia embers.

Throughout, time is spent bringing everyone back together and, again, it feels a little rushed and over-co-ordinated, as if several episodes got squished into one 90-minute outing and some things got exorcised or compiled to keep things going.

Maggie and Negan had the talk and, frankly,  it was good that Maggie said she couldn’t forgive him for Glenn’s death – anything else would have been the most unrealistic thing in a show about the undead rising. However, she said she respected that Negan was now  – over a decade later in in-universe time – a different man, truly not working ‘the angles’ with her, but daily trying to make up for the actions of his past. Maggie said he’d earned his place among them, but that he would have to understand there would be days when she still could not look at him and he acknowledged that was as much as he deserved. (How this will all play into the Dead City spin-off still isn’t clear). However, they did work together to assassinate Pamela Milton (Laila Robins), though they didn’t need to follow through in the end.

And that’s an interesting choice. Milton was a character that most viewers would have been happy to see killed off, especially after she shot Judith in last week’s episode. For a while it looks like either she’ll be shot by Maggie’s sniper in revenge or – after her own forces turn against her when she’s been willing to let everyone outside the gates die – letting herself get eaten by the horde (and, in particular, a decaying Hornsby). But instead, she’s made to live with what she’s done, watching the Commonwealth enter a new era without having her at the helm (a little like the comics). Perhaps that’s worse. (Probably not, but we won’t have to watch her find out…)

Many fans have campaigned for Daryl and Carol to end up together, Norman Reedus and Melissa McBride having the most memorable chemistry of the run. If the finale didn’t give them the full-on romantic treatment it arguably went one better with them saying the ‘I love yous’ in an expression of being soul-mates forever. McBride was supposed to ride off with Reedus into his further adventures until she decided filming in Europe for long periods would be too much at this point, so in a change to the script she watches him ride off alone With Daryl finally finding out Rick and Michonne were likely alive, he has places to be… and somehow that will end up being in France for his spin-off…

However while that shot of Daryl Dixon astride his beloved motorbike (but minus his Dog who stays behind like a good boy) might have made a decent final image, we do have a coda and… yes…again, huzzah… it’s Andrew Lincoln and Danai Gurira reprising Rick and Michonne in what is honestly little more than a callback to a comeback, an enigmatic teaser for their forthcoming production. Separately they’re writing messages to those they’ve left behind and promising to find each other and then return… and it drops a lot of interesting and satisfying visuals into the mix.  Tenuously connected to anything that’s gone on previously in the episode, it’s a bit contrived and clunky on a narrative level and essentially just a fan-service epilogue, but it’s true that anything less would have left the fans disappointed.

Some of the The Walking Dead‘s massive audience may have deserted the show along the way, but for those who stuck with it, Rest in Peace gathered up those pieces together and arranges them in a way that may entertain rather than completely satisfy. The Rest is yet to come. 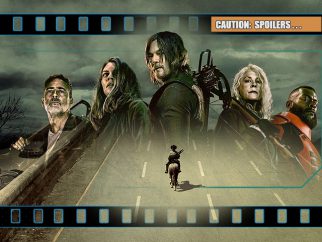 ‘Daughter of Ferrix’: Matters of Life and Death in penultimate ‘Andor’…